My name is Michael Leslie Rycroft, I am the proud Great Grandson of Charles Hale, Twickenham's first groundsman, a position he held for 39 years. My mother was so proud of her rugby roots and her connection with Twickenham Rugby Ground. Upon the death of my mother in December 2014 I decided I needed to know a lot more about my family connection with Twickenham as most of my knowledge was hearsay and childhood memories. I made contact with the World Rugby Museum curator, Michael Rowe and introduced myself. I inquired to see if he had any information regarding the Hale family. To my surprise he said he had and that he also had a family photo album and press cuttings regarding Charles Hale and his family. The photo album had been sent to the museum by a member of the public in 2011 who had decided it was best kept at the home of rugby. Michael invited me along to view the album and it was quite moving to see a picture of my late mother, as a little girl with my Great Grandfather Charles and Great Grandmother Sarah.

The original album, together with the letter from the lady that kindly sent in the album, is still in the museum and I am in possession of a high quality album with copies of all the photos. A very big thank you to Michael Rowe and Phil McGowan at the Rugby Museum for completing a large piece of the Hale family history. Charles Hale, was a Suffolk man by birth. He was born in 1873 and eventually became a landscape gardner, he left his native county towards the end of the century and moved to Sunbury, Middlesex where he joined the Metropolitan Police Force for a while. This proved unsuitable to Charles so he resumed to his landscape gardening. Prior to his engagement at Twickenham, Charles was responsible for the laying out of the famous sunken lawn at York House, Twickenham. 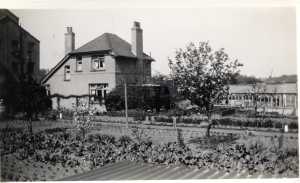 As Twickenham's leading landscape gardener, Hale accepted the post of groundsman and moved into the Cottage in the shadow of the east stand with his wife Sarah. Together they had four sons and one daughter, all of whom lived in the cottage. Three of his four sons, Wilfred, Sidney and Ronald all assisted their father in the running of the rugby ground. During his 39 years as groundsman, Charles was particularly proud of the fact that no matches were called off through bad pitch conditions. He was a weather expert and at the first sign of frost, he, together with the help of his sons and staff would cover the pitch with a coat of straw to protect it from frost damage, sometimes this task was carried out in the middle of the night if a "snap" frost was due. During match day he was responsible for providing spare jerseys, shorts and balls. At half time he would run out with a large tray of lemons for the players. At the end of a game he was tasked to retrieve the match ball before an over enthusiast spectator took it away as a souvenir. Portly "Charlie" had a genial round face and a large flowing moustache. He was portrayed in a Caricature by the famous cartoonist, Tom Webster, of himself preceded by an enormous moustache, carrying on a dish of lemons. Tom went as far as to say that Charles should be awarded a "cap" because nobody brings out a speedier lemon. Charles worked until the age of 73 when ill health forced him to retire on the 30th June 1946. The Rugby Union kindly purchased a house in Chudleigh Road, Twickenham, for him and his wife to move into where they lived rent free. Charles was well known and a popular figure in Twickenham. His hobby was playing billiards and Russian pool in the Twickenham Club and Institute and his prowess produced two very fine cups. He passed away in St Johns Hospital,Twickenham on the 2nd April 1948 aged 75 following a long illness. He was married for 53 years and left his wife, four sons, a daughter, five grandsons, a grand daughter and a 7 month old great grandson, Michael, the author of this piece. Charles's funeral took place at Mortlake Crematorium on Wednesday 7th April 1948. Members of the RFU attended the service and floral tributes were also received from the RFU and Harlequins RFC.