Twickenham Stadium Tour Guide Andy Bustin recalls his earliest experiences of the game and a first trip to Twickenham back in 1967...

I was not 'into' Rugby as a child; both my father and grandfather were on the committee and indeed served as Players, Chairmen, Secretary and Treasurer of our local village Football and Cricket Teams. I didn't enjoy watching football, invariably it was raining and I just couldn't follow with the enthusiasm shown by my father. So I would sulk around the Clubhouse (I use the word Clubhouse advisedly), a corrugated iron shack that leaked and bore the smell of some substance the players rubbed on their legs combined with wet shirts and sweat, playing with my model cars and lead soldiers.

Cricket was different. The Clubhouse was the Village Hall, dry and warm; my grandmother, mother and sister did the teas, so at least I knew I would like the food. The days were sunny, and I enjoyed playing cricket at my primary school. At school I remember my headmaster telling us that he would pay half a crown to any boy who whilst batting got the ball in the river that ran alongside the cricket ground. He also paid me five shillings (that's TWO half Crowns) for getting a hat trick. After all these years I must confess the second and third wickets were both cousins of mine who were paid one shilling each by me. They were also fielding when miraculously I managed to be the only boy to get the ball in the river twice (nobody said it had to get there in one hit and may have been 'helped' on its way by an errant fielder).

So, how did Rugby come into my life? I used to watch, without really understanding, television coverage, at my grandfather's house (my father didn't want one of those 'orrible boxes) and hoped, above hope, that I passed my eleven plus because the High School played Rugby and the Secondary Modern didn't. Somehow, it seemed more exciting than football. My older sister was now into watching the game and a stream of boyfriends all of whom were in the rugby team would turn up at the farm where we lived.

Luckily I passed my 11 plus and went to High School, where my love of Rugby started. This was frighteningly new for an 11 year old country boy, a bus to school every day, then a walk, instead of a meander through the field of cows. I was often late at Primary school during lambing season, and everybody understood.

My first lesson at Secondary school on 5th September 1964 was Maths (what's that got to do with Rugby?). The Maths teacher was a man called Roger Quittenton (he went on to referee 20 International Rugby Matches). I enjoyed maths, I was good at it, I liked this man, he was my mentor and, by some fluke of timetabling, my maths teacher for the whole of my school life. Roger was exciting, and, even better, his brother was in a band!!! His brother Mick wrote and played Mandolin on Rod Stewart's hit Maggie May.

Our first games session came on a Friday, we had to decide between Football and Rugby. I didn't like Football, as I said earlier, so it would probably be Rugby, but I knew nothing about it... Then the PE master said Mr Wilkins was taking Football (I didn't like him much either) and Mr Quittenton was taking Rugby. Decision made.

It was great, sliding about in the mud, and because we finished before the footballers we got the HOT showers (well hotter showers).

I progressed through the ranks at school and played for the IXVs as the first team became known when in the third year, I was fast so could run up and down the wing, However, because I was only a 3rd former the 'bigger' boys didn't want me to have the ball so I did very little. But as a member of the prestigious IXVs I was entitled to go to the Varsity Match with the school. This was great for me… The Match was on a Wednesday afternoon, traditionally the 'games' afternoon for the Sixth forms in our area, so nobody would miss any, what my father would call, 'important' lessons. For me it was different. It was 1967. I was 13. I would miss 'proper' lessons.

The older boys had managed to persuade the teachers that would be accompanying us (we had an ex Welsh International prop forward as well) that lunch could be taken at a 'hostelry' on the way to Twickenham. I knew I would be alright though; I wouldn't be able to go in BUT MY MUM HAD MADE ME A PACKED LUNCH. One thing that had always worried Mr Q about my playing was, I wasn't, in his opinion, aggressive enough. He was right; I was a mild mannered little boy… Until, that is, a bigger boy decided to try and be clever and steal a sandwich from me. I clenched my fist and hit him so hard he rocked back and hit his head on the seat in front. I thought I would get crushed in a bundle by the rest of the team, surprisingly I didn't. They supported me against this 'bully'. When I arrived at Twickenham I was on a 'high' that remained all day. Twickenham inspired me, I had never seen a structure so big, we had a couple of big barns at the farm and the bus station in town was big…but nothing like this. 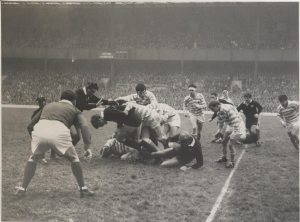 The roar of the crowd as the players came out sent a shiver down my spine, it still does today. I don't remember the score I just rode the euphoria surrounding me. Who did I support? That's easy, my grandfather was born in Oxford, my father studied there, so it was obvious, and I like light blue anyway… Cambridge it is. Ironically, 40 years later, my son would obtain a degree from Cambridge so my early choice was right.

We would love to hear about your own special rugby memories. Please send any contributions to [email protected].