A mixture of rain and snow accompanied the team on their journey north for their penultimate game of the 1914 5 Nations Championship. Their destination, Edinburgh, had experienced three weeks of solid rain but, against the odds, blue skies and a dry wind welcomed England on their arrival. Later that afternoon the two oldest sides in international rugby lined up at Inverleith for what would be the last time for several years. Within a year the majority of those who took to the field would be serving their country in various theatres of war around the world, including Gallipoli and the western front. By the time the First World War had ended no fewer than eleven of the thirty players involved that day had given their lives to the conflict. The fixture represented the last serious obstacle between England and a second consecutive Grand Slam. This was one of England's finest sides with the likes of Bruno Brown, Jenny Greenwood and Cherry Pillman leading the forwards; while fly half Dave Davies orchestrated the attacking play of Kid Lowe and the irrepressible Ronnie Poulton. True to form England raced into what seemed like an unassailable lead through a hat-trick of tries from flying wing Lowe and another from Poulton, the inspirational captain. Scotland however did not yield easily in Edinburgh and mounted a spirited comeback that brought Eric Milroy's side within one point of the visitors. In the end though England had done enough, they held on for a 15-16 victory and would wrap up (what would now be described as) a Grand Slam the following month by notching nine tries in Paris. 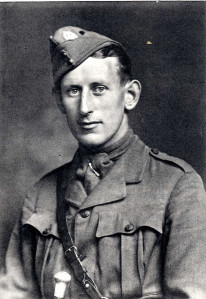 Amongst the English backs in Edinburgh was a young left wing from county Durham called Arthur Dingle. Dingle had earned a blue for Oxford University in 1911 and his prolific try-scoring exploits for Hartlepool Rovers had brought him to the attention of selectors. Amongst his teammates he was known as 'Mud'. At full back for Scotland was another blue, this time from Cambridge, called Willie Wallace. Wallace, of Edinburgh Academy, was a confident place picker who marshalled the Scottish line with calm assurance. But both Wallace and Dingle would endure an afternoon to forget at Inverleith. Dingle managed to spill a try scoring opportunity early in the game and Wallace had his hands full trying, unsuccessfully, to contain Lowe for much of the match. When it became clear that war could not be averted both players enlisted. Wallace was described as being the very first undergraduate to have done so and left for France as a rifleman with the Rifle Brigade in August 1914. Dingle enlisted with the East Yorkshire Regiment within days of Wallace and was posted to the 6th Battalion (Pioneers). Wallace was the first to see action, involved in skirmishes at the Battle of Aisne he then became an observer with the Royal Flying Corps in 1915 and was promoted to Lieutenant. Dingle had to wait until 1915 before he and his Battalion set sail for Gallipoli. There they successfully landed at Suvla Bay and made some progress towards the highpoint of Tekke Tepe before the Turks were able to reinforce their positions. After having faced each other across the rugby field in 1914 both Wallace and Dingle would lose their lives on the 22nd August 1915. Wallace was hit by anti-aircraft gunfire during a reconnaissance mission over Sainghin, close to Lille. 2000 miles away, Dingle, having survived the initial landings and the Ottoman counter-offensives, was struck by a bullet through the temple while defending a trench on the approach to Scimitar Hill. Dingle was included as Epitaph 1 in John Still's 'Ballad of Suvla Bay':

'Broad, and simple, and great of heart, Strenuous soul in a stalwart frame ; Whatever the work, he took his part, With energy strung from the very start, To learn the rules and play the game. He played for an English side before ; And all unspoiled by the crowds applause, He took for his side their greeting roar : And so in the greater game of War He gave his life for the greater cause.' 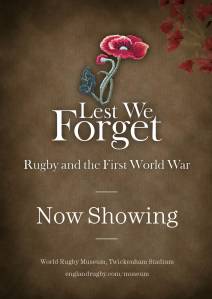 The World Rugby Museum special exhibition 'Lest We Forget' recalls the sacrifices of men such as Willie Wallace, Arthur Dingle and others around the world who fought and died in the First World War. Please like the World Rugby Museum on facebook and follow us on twitter to receive further tributes to the international rugby players who fell in the Great War.