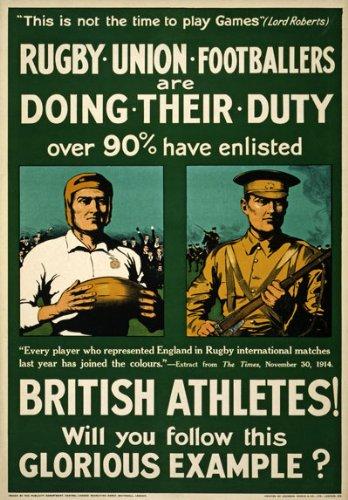 This large colour woodcut poster, made by Johnson, Riddle & Co. Ltd. is one of many such recruitment posters produced during the First World War. They were designed to provoke a sense of duty to one's country and to encourage young men to join the armed services. Johnson, Riddle & Co. Ltd were printers and cartographers based in London who, as well as producing posters like the above for the Central London Recruiting Depot, also printed some of the earliest poster maps for the London Underground. This poster claims that 90% of Rugby Union footballers, and all England international players from the previous year, had already enlisted, so it was hoped men would want to emulate their sporting heroes, such as Ronnie Poulton, and join up too. Sadly, 27 of those England internationals, as well as thousands of club players, did not return from the frontline. During the war, the Rugby Football Union suspended matches between clubs to show support for the war effort. In addition to this, England did not play a capped international match for six seasons. This heightened public perception of rugby after the war as it became the sport most associated with high moral standards.