22 June 2020
War Games: Rugby on the home front during the Second World War

The UK rugby season, such as it was, closed at the end of April, 1940: whereupon Hitler launched his assault in the west, into Scandinavia, then through Holland and Belgium, once again, into France. Churchill replaced Chamberlain on May 10th and battle was joined. It was not long-lasting, the German plan working shockingly well. The British Expeditionary Force, which had hoped to help defend France, retreated before the month's end to Dunkirk, where a mixture of bravery, stubbornness, luck and Nazi over-confidence in their Luftwaffe allowed over 330,000 British and Allied troops to be evacuated by ships big and, famously, little. They had, vitally, lived to fight another day. To be precise, a D-Day, exactly four years later… In Britain, rationing of basic foods and meat had begun, while in the seas around her, U-boats were hitting shipping, including that bringing supplies. France surrendered on 25 June, for the north to become occupied, the 'Vichy' south collaborationist. Japan, Hitler's other friend, was meanwhile making strong progress in China and the Pacific, helping increase the 'isolationist' USA's fears and their aid to the Allies. 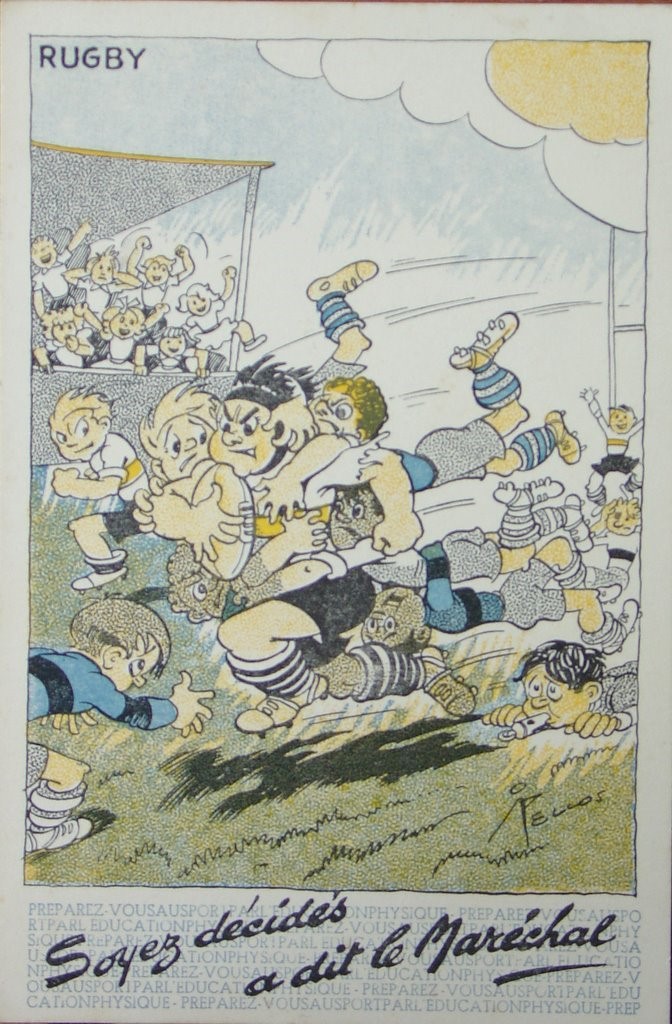 As Hitler planned the invasion of a Britain he hadn't expected to have to fight, he needed to ensure supremacy in the air. So, as the second season of war-time rugby began in September 1940, the skies above southern and eastern England saw the fighters and bombers of the Luftwaffe opposed by the 'Few': Churchill's lauded young RAF pilots, many of whom were to come from the Dominions, in the pivotal Battle of Britain. Eventually and probably mistakenly, Hitler turned from the heavy airfield attack losses to blitzing London and other cities instead. (The rugby grounds at Cardiff Arms Park and Bath, amongst others, were to suffer from bomb damage in coming years). As Londoners proved 'they could take it', though, clubs outside London, including Gloucester, were organizing sides and following the example of clubs such as Rosslyn Park in encouraging fundraising games. For instance, on Sept 21 at Clifton College, Bristol, a crowd of well over 3,000 paid one shilling each to see ex-English cap Rev. Peter W.P. Brook's XV beat an Empire XV 23-21 in a clash in aid of the Red Cross. It is uncertain as to who played, but many internationals were selected and the Empire side included New Zealander Eric W.T. Tindill as captain and the two Hook brothers (Bob and Bill) from Gloucester in the back division. Oct 19 - Len Corbett's West of England XV 25 Empire XV 8 (at Bath). Corbett's XV included Ronnie R. Morris (Swansea/Bristol/Wales) and the Empire XV included (W.E.) Jones, Travers, Maurice J. Daly (London Irish/Ireland), (C) Matthews, plus the NZ Services trio of Cyril S. Pepper, (Eric) Tindill and Sgt. T.G. Fowler, who gained the Military Medal and had played for Taranaki and the North Island). Pepper and Tindill had both toured GB with the 1935-36 All Blacks. Nov 2 - Rev. Peter W.P. Brook's West of England XV 11 Welsh Army XV 16 (at Clifton College). Welsh Army XV - Harold Westcombe Isaac (Newport); (C) Matthews (Bridgend), (D.A.) Brown (Cardiff), (R.R.) Morris, Lyn Williams (Cardiff); (W.E.) Jones (Neath), A. N. Other; W.G. Jones, Travers, W. Gough, Ernie Coleman (all Newport), Les Spence (Cardiff), Leslie Paul, P.T. Jones (both Newport), Samuel W.D. Seager (Chepstow). Tries: (Chris) Matthews 3, Morris. Cons: Brown 2. Pic: Rev Brook's XV v a Welsh Army XV Nov 23 - Tommy Voyce's XV 18 Wavell Wakefield's XV 11 (at Kingsholm, Gloucester): the referee was Wakefield, 42, the former England captain. Over 4,000 watched the game. Also this day, the NZ Services side opened their account: a full listing follows below. Dec 7 - Cambridge University 11 Oxford University 9 (at Oxford). Blues were not awarded. Cambridge - Tries: (E.R.) Knapp (capt) 2, A.L. Evans. Con: G.T. Wright. Oxford - Try/DG: P.L. Richards. Con: (E.K.) Scott (capt). Dec 14 - Cardiff 17 Empire XV 3 (at Arms Park, Cardiff). Dec 26 - Cardiff 16 Welsh Army XV 0 (at Arms Park, Cardiff). With war truly under way - 'total' war, with civilians as well as servicemen and women under real threat and fear of enemy bombing and invasion; with retaliatory bombing of German cities and other targets; with fighting against the Italians in Africa and with the Battle of the Atlantic more than occupying the minds of the Royal and merchant navies, representative rugby was for some time less easy or viable to arrange or attend. Meanwhile, the Exeter ground was taken over by the military, mostly for Army transport and eventually for the American forces' preparation for D-Day. Aberavon's ground, allotments in 1914-18, became a barrage balloon site in 1939-45, but eventually clubs like Newbridge (reserved-occupation miners predominating), Newport and Cardiff (docks trade, mining and medicine) were to benefit from some continuity and growth in strength. Although Swansea 'shut down' as a club, individuals there formed the less-than-snappily-titled Swansea and West Wales Rugby War Charities Effort, and with Nazi bombs mercifully avoiding the St. Helen's Ground, arranged a successful series of wartime 'internationals and semi-internationals' after 1940. With leading professionals and amateurs in the services involved, good rugby and good crowds resulted, and over £15,000 was raised by 1945. Similar stories might be told elsewhere, with Gloucester's impressive Rugby Heritage website, for instance, one rich source of evidence of the kind of games - and lengths - gone to in order to raise sides and charity cash by the use of the Kingsholm ground, even if the club was out of action. Similarly, J.E. Thorneloe, secretary of Leicester, was to organize impressive XVs in his name to play a series of fundraisers, especially involving Boxing Day and Easter games against the Barbarians at Welford Road: shades of the late Edgar Mobbs and his East Midlands efforts early in the First World War.

About the Author - The article above is taken from Howard Evans and Phil Atkinson's 'War Games: Rugby Union during the Second World War', published by St David's Press and the first book to pull together in detail much of the rugby played 1939-1946, including the hugely-successful NZEF 'Kiwis' postwar tour.

A century ago, in this deciding clash for George V’s King’s Cup, could the Mother Country reverse their earlier defeat by New Zealand, or would the men from 12,000 miles away maintain their edge and build on the winning reputation they and their countrymen had built over the previous fifteen years?
Read More