As the King's Cup tournament of 1919 drew towards its climax, the Mother Country and New Zealand travelled north of the border to Edinburgh's Inverleith, for what turned out to be a terrific foretaste of the eventual final and produced the 'Storey' of the day…

From the pre-game joint team photograph, the splendid Blackheath forward Peter Lawless, MC proved the only player on the Mother Country side never to be capped. He served in the Artists Rifles, captained Richmond RFC and was to be a sports reporter for The Morning Post and the Daily Telegraph, specialising in rugby and golf. In 1945, reporting on the US advance into Germany he was killed by shell fire. His only daughter, Pamela Faulks, is the mother of award-winning Birdsong novelist Sebastian Faulks. 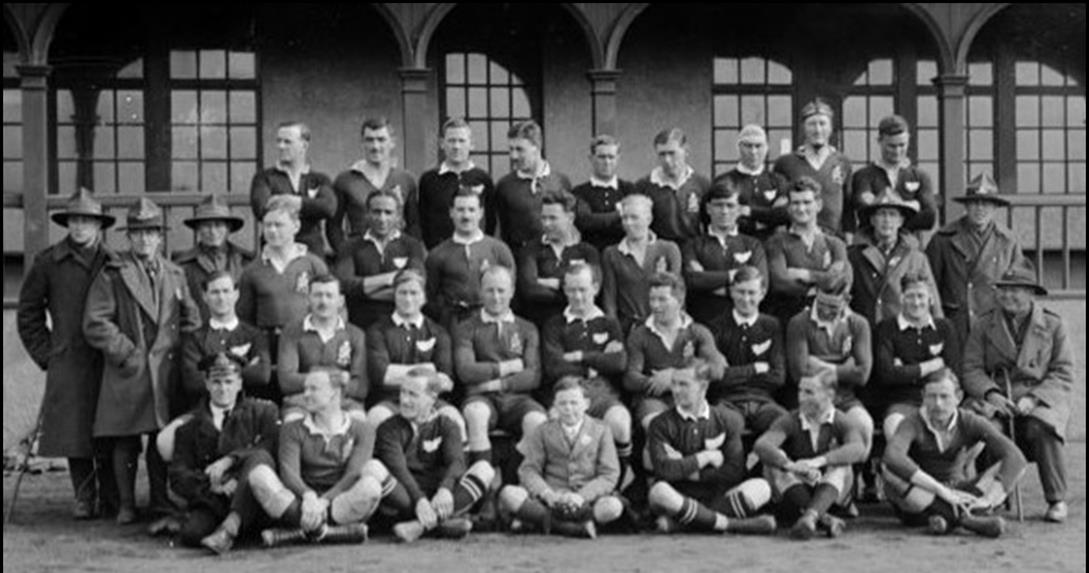 Reports claimed few more impressive sights in the history of rugby had been seen than when 'God Save the King' broke out before the start, well over 20,000 standing with soldiers saluting and civilians bare-headed in loyal tribute to the head of the empire and the donor of the trophy. Hundreds of NZ soldiers had made the long trek to Scotland but the home supporters roared loudly as Australian-born Leo Brown led the red-jerseyed Mother Country team out onto the pitch: both sides wore numbers. All present witnessed the greatest match of the season. The Daily Telegraph noted:

"It began at a high rate and finished full of fury, with the Mother Country players almost incredibly strong and fighting to the last gasp; New Zealand, with their backs to the wall, refusing to yield and holding their lead with a grimness which won the warmest admiration from the spectators."

In his 'Words of Passage: The Original', NZ journalist J Thomson recorded it like this:

By April it was clear that these two teams were rising to the top of the ladder... the Inverleith ground was crammed, with thousands of our Diggers on leave and wearing the then-familiar 'lemon-squeezer' hat.' 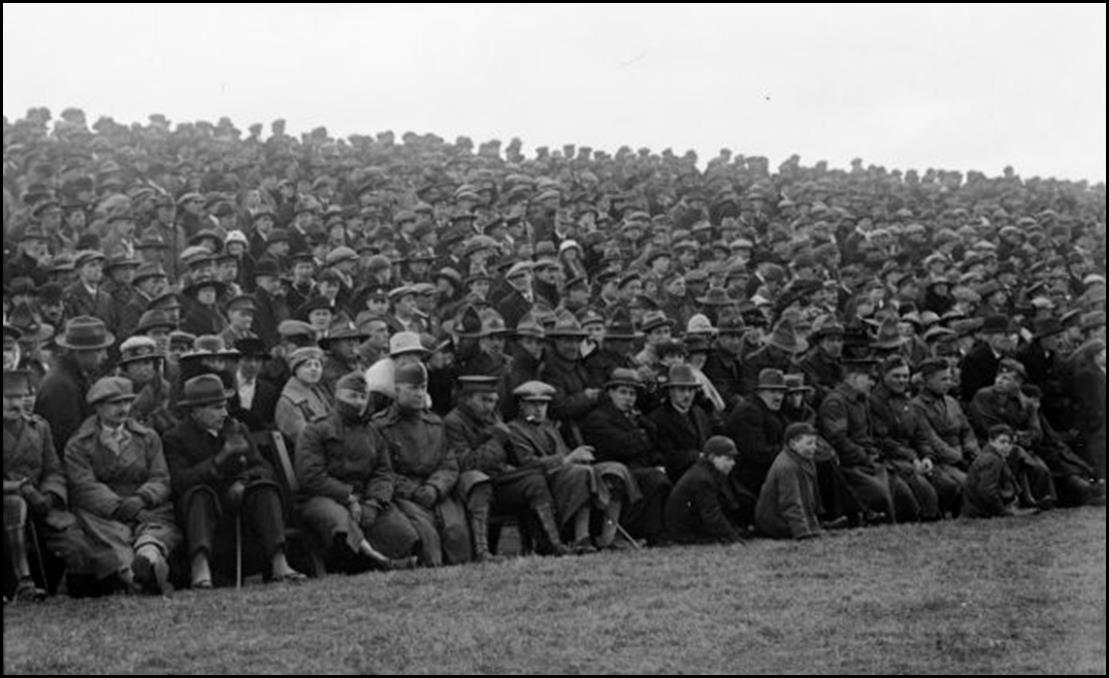 No new players were introduced on either side in a match where New Zealand hung on like grim death in a tremendously tense tussle, which was easily the best of the tournament. The Mother Country team were to play extremely well and went very close to gaining the win, but New Zealand took their two chances in the first-half superbly. As usual it was their splendid wingers, Percy Storey and 'Jockey' Ford, who were at the heart of their attacks. Jimmy Ryan, their five-eighth and captain on the day, was injured for a spell, while his opposite number, Wales' Clem Lewis, had a comparatively poor game. The Mother Country's best performers in the backs were full back Barry Cumberlege and centre Reg Pickles. Forward 'Cherry' Pillman took over the task of putting the 'home' ball into the scrum as the speedy NZ flanker Arthur Singe was on top of scrum half John Pym so quickly. A tremendous maul on the line saw the powerful forward 'Moke' Bellis open the scoring for the All Blacks, before Storey took a hand with what Thomson, in his account, called

'...the best solo effort I have ever seen in first-class company. At a vital stage, Storey intercepted the ball in his own 25, shot off the mark like a bullet, veered slightly infield and side-stepped through a previously impregnable defensive line. With full back Cumberlege still to beat, we wondered what Storey would do, his terrific speed having left his support behind. Should he punt over the full back's head and risk the luck of the bounce? No such thing. Not from the volatile Storey, He ran straight at Cumberlege, giving the impression that he might go right through him. Then, at the last second, he succeeded with still another lightning sidestep and was over the goal-line in a flash for a try. The scene among the New Zealand groups around the ground can easily be imagined. Impromptu hakas broke out here and there, and 'Digger' hats were thrown high in the air to become souvenirs for civilians…' 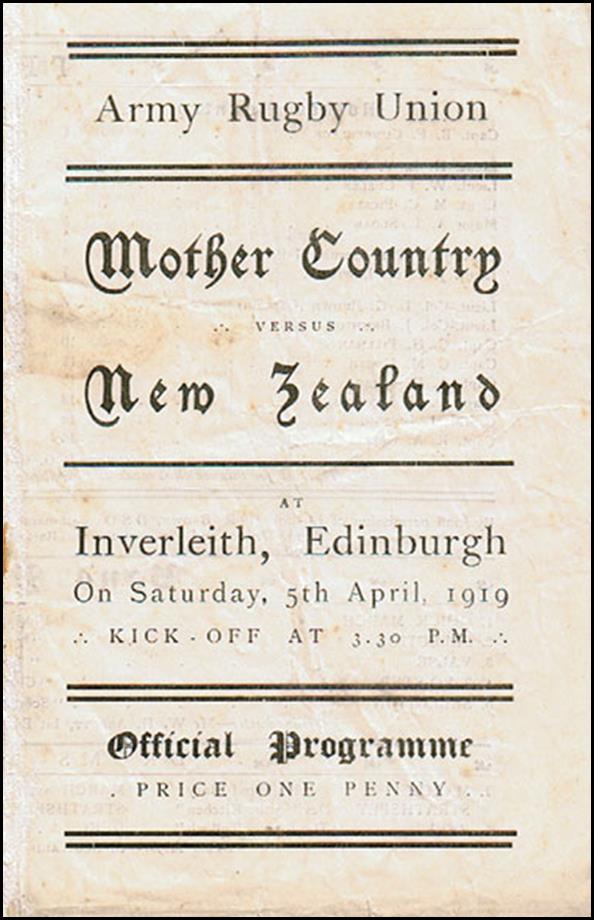 Some score! The Mother Country's pack, led by Pillman and Usher, had begun the game well, but Pillman had let a chance slip when he kicked instead of passed and Lewis missed with a drop shot, while Harold Day, from a pass by Cumberlege, was just held up short of the line. New Zealand, who had won the toss, had temporarily lost Ryan in the first half with that ankle injury, but he soon returned, seemingly sufficiently fit. Some had thought that the Belliss try would have been ruled out with both packs on or over the line, but referee Cunningham awarded the score. No TMO then! In the second half, the Mother Country pack battered at the New Zealand line and Pillman had a 'home' try disallowed for not grounding correctly, but when Lewis and Pickles handled, although William Cullen was tackled as he kicked ahead, winger Day defeated Ryan in a race for the ball to grab a Mother Country try. It was now one-way traffic as the Mother Country turned up the heat, but New Zealand tackled and tackled. Cullen went for what would have been a drop goal-winner (then worth four points), only to see the ball go just wide. O'Brien was safe and Singe outstanding and though Lewis took Pym's passes well, he was closely marked and not at his very best, while Pickles and Sloan were dangerous and Cumberlege a huge success at full back. Sporting Life said:

"It was no disgrace to the Mother Country to lose, but had their forwards played in the first half as they did later, the visitors' defence would not have prevailed. The Colonial threequarters scarcely ever got going properly. The wing men never got a decent chance and the opening that Storey got, he had to make for himself."

"New Zealand were ever so slightly the better side. The irrepressible Storey is surely the discovery of the competition."

It was a match played in a great spirit and New Zealand remained unbeaten: so they just needed to defeat Australia in four days' time to win the Cup outright... watch this space! 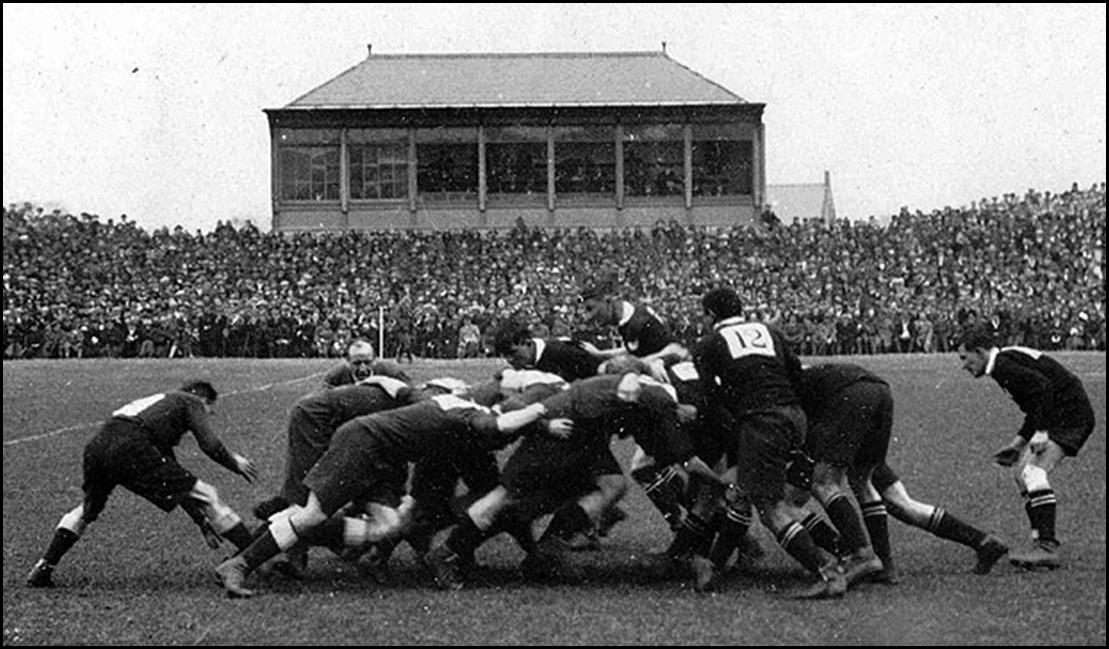 It had been a fitting spectacle, living up to hopes and expectations, and leading one spectator to feel:

"There is not much wrong with the British Empire when it can breed such men."