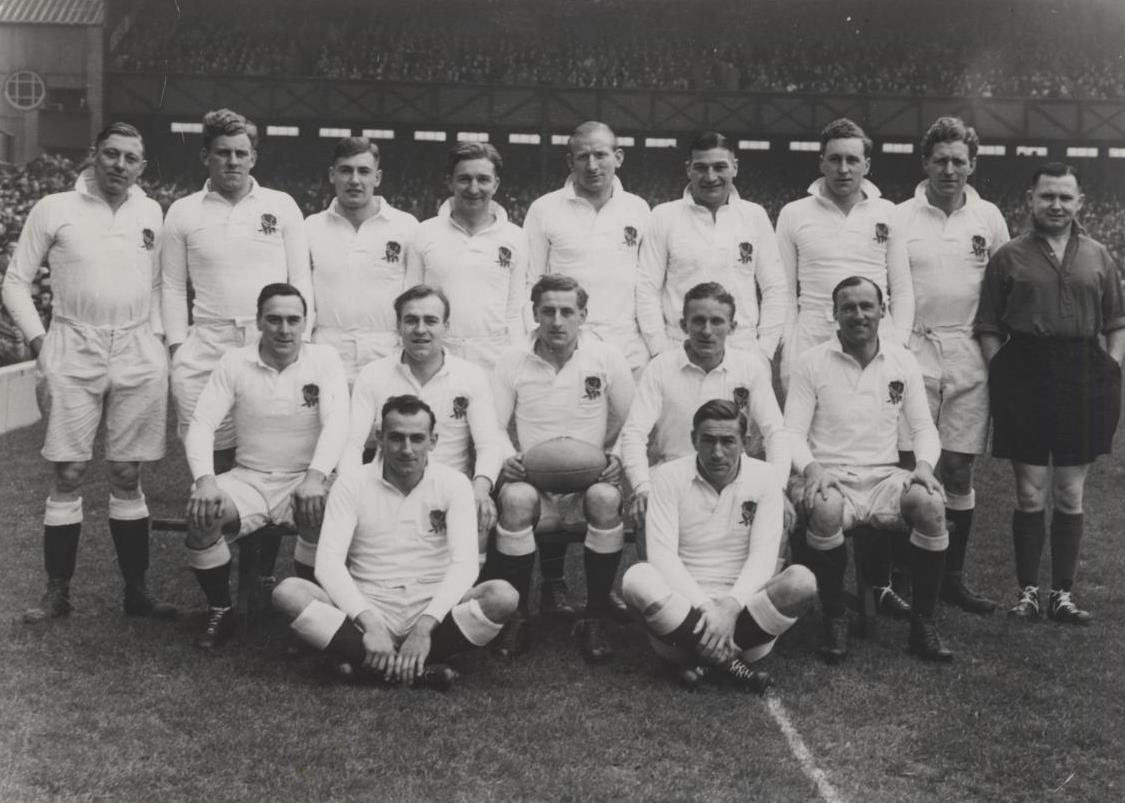 The face in the middle of the back row of the England and Lancashire team groups from 1948 compels attention. Slightly taller than his team-mates and with short, receding fair hair, he has an air of maturity and knowing that there is more to life than sport. Lock forward Humphrey Luya was born 100 years ago this month on 3rd February 1918, so just over 30 when the pictures were taken. Educated at Merchant Taylor's School, Crosby, he had graduated to playing for Waterloo before being commissioned in the Royal Artillery in 1939. He served in North Africa before becoming one of 12,000 Allied troops captured following the doomed defence of Crete in June 1941. Initially held as a Prisoner of War at Stalag 18a near Wolfsburg in Austria, he was transferred to Oflag 9A/Z, a camp for captured officers at Rotenburg am der Fulda in Central Germany. This was not necessary a pleasant place to see out the war. A document in the Public Record Office records an inquiry into the ill-treatment of PoWs there. Nor did a happy ending seem likely when they were marched westwards out of the camp ahead of the advancing Russians. Convinced they were going to be shot, Luya and George Kennard, as Kennard's 1999 Times obituary recorded:

"broke away from a marching column of prisoners and bolted into a wood. By this late stage of the war, the guards were either old men or mere boys, so no determined effort was made to recapture them. Two days crouching in a thicket in the middle of a German defensive position until it was evacuated led to the pair's liberation by the American Army."

'Liberation' looked initially to be a mixed blessing. Both escapees were tall and blond, leading their 'liberators' to conclude that they were Nazis in disguise. They came very close to being shot before the Americans were persuaded of their true identities. For Luya, the 1947-8 season of those team groups was the sort of which rugby players dream. In the space of a month from late November he played for the combined Lancashire-Cheshire team which beat the touring Australians, in two England trials - the second for England - and for the Barbarians in the Boxing Day match at Leicester. He was not chosen to play against Australia on 3rd January 1948, but England's defeat led to his call-up against Wales two weeks later in place of Joe Mycock of Sale, a year previously England's first postwar captain. It was not to be a great Five Nations for England. They began as reigning joint champions, but only the 3-3 draw with Wales averted their first ever four-defeat whitewash. Twenty-seven different players pulled on the white jersey. Newcomers are particularly vulnerable under these circumstances but Luya survived, along with second row partner Sam Perry, Coventry prop Harry Walker and back rower Mickey Steele-Bodger, to play every match. There were five Waterloo players in the teams beaten by Ireland and Scotland, full-back Dick Uren, veteran wing Dick Guest - scorer of both tries against Ireland - centre Bill Bennett, Perry and Luya. Yet only Guest and Uren were listed as such. Perry, destined for a distinguished career as an academic physicist, was still at Cambridge and Bennett a serviceman playing for United Services Portsmouth. Luya, was listed as a Headingley player, as he pursued an open, legitimate cross-Pennine double life of the sort possible when players were amateur, there was no inter-club competition and travelling conditions made even comparatively short journeys difficult. Both Waterloo and Headingley claimed his achievements with pride in the Playfoir Rugby Football Union Annual and he was listed as a Waterloo player in the Lancashire team which won a second consecutive county championship, beating Eastern Counties 5-0 in the final at Cambridge. Those 1948 results led inevitably to further changes in 1949. Walker, Perry and Steele-Bodger, forced to retire by injury, did not play for England again and nine new caps were named against Wales. But Luya was still there, England's sole survivor from the same match a year earlier. Appearing in a losing England XV in the final trial was probably outweighed by his performance in a fiercely contested County Championship semi-final against Yorkshire. There were also debutants from both his clubs - Waterloo scrum-half Gordon Rimmer and back rower Bryan Braithwaite-Exley, a Headingley stalwart until the early 1960s. But England lost 9-3 in Cardiff and Luya was dropped, as was Braithwaite-Exley. He ended with no wins from five England appearances, having played with 37 different team-mates and evidently let none of them down. But there was to be another County Championship, won on home turf at Blundellsands and four more years with Headingley, two as captain, before retiring at 35 to devote himself fully to his family and a series of senior posts in the food trade, eventually running his own company. His Yorkshire Post obituary recalled him as a ferocious competitor on the field, but known for his 'patience, understanding, broadmindedness and kindliness' off it. The postwar England generation were a durable lot. Walker is still with us at 103, while Steele Bodger remains president of the Barbarians 70 years on from his last match. Clive van Ryneveld, whose first match was Luya's last, died only last month. Luya, the man nearly shot by both sides in 1945, proved pretty resilient in postwar life too, making it to 90 before he died in May 2008.

About the Author - Huw Richards is a freelance journalist, historian and university lecturer. He was rugby correspondent of the Financial Times from 1995 to 2009, author of three works of rugby history, co-editor of two books of essays on Welsh rugby heroes and co-writer of Robert Jones's autobiography. He contributes the regular 'Rewind' history column to ESPNscrum.com.