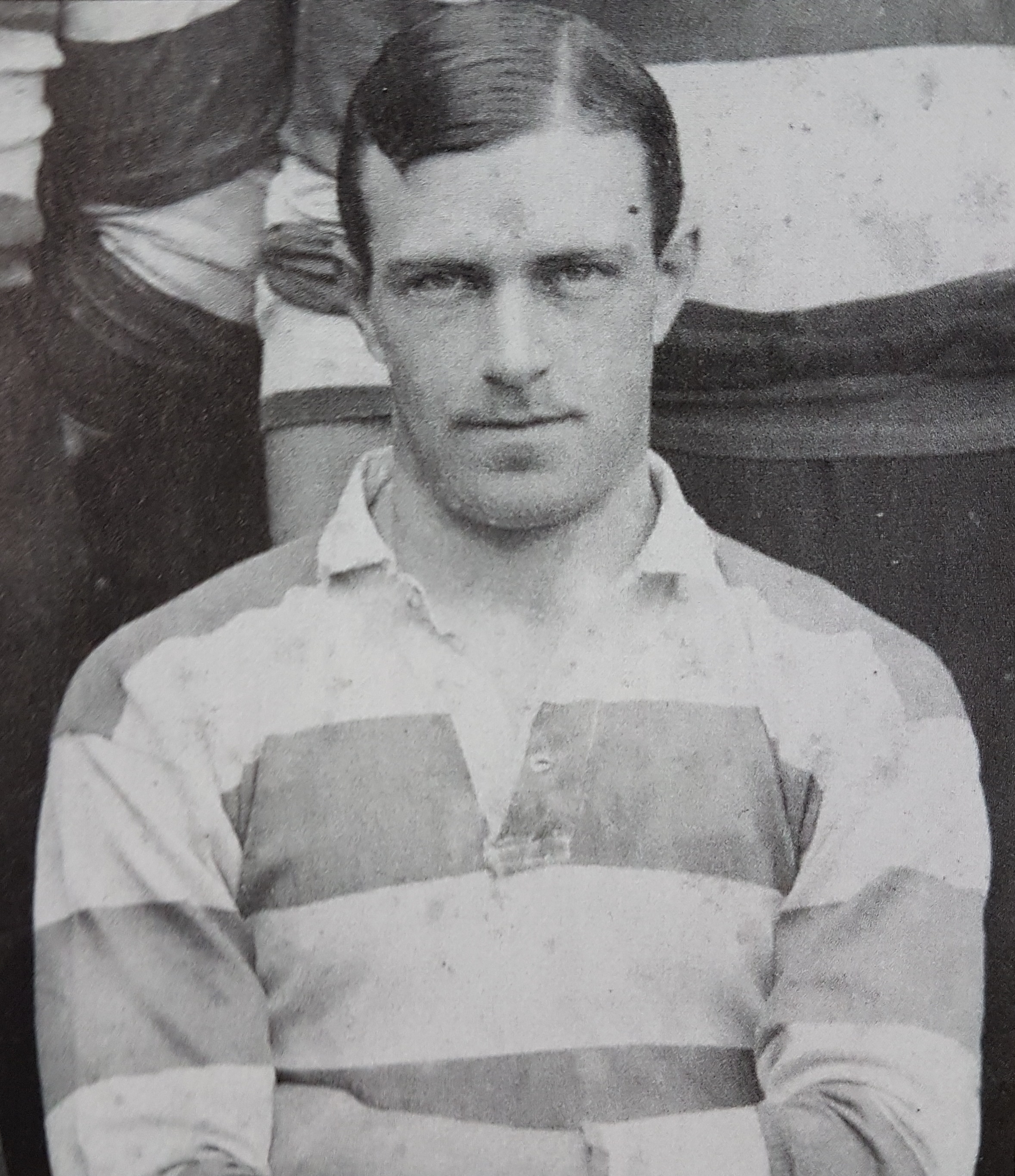 On February 25th 1918 Lieutenant-Colonel George Alexander Walker (Geo) Lamond died in the military hospital at Colombo in Ceylon (now Sri Lanka) aged 39. A civil engineer by profession, he had seen active service in France before being sent to Mesopotamia in August 1917 to be in charge of the construction and organisation of the new port and works on the Twin Rivers, the Tigris and the Euphrates. He died from pneumonia brought on by a fever caught in Mesopotamia from where he had been invalided to Colombo. By the time the First World War started, his distinguished rugby career was very much in the past. Born in Glasgow on July 23rd 1878, he was educated at Kelvinside Academy and first played for Kelvinside Academicals, the Old Boys rugby club, in 1895 at the age of sixteen. He played in the centre for Glasgow against Edinburgh in the inter-city match for three years, scoring a drop goal in his final appearance in the series on December 3rd 1898. His reputation as an excellent drop kicker from either foot and a strong distributor of the ball to his wings in open play attracted the attention of the Scottish selectors. He missed the principal trial match and so was not originally picked to play for Scotland against Wales in their first match in the 1899 international championship. That match was scheduled to be played on January 28th on the Scottish Rugby Union's new ground at Inverleith in Edinburgh. However the ground was frozen over and the pitch unplayable. The match was postponed four times due to frost and was not eventually played until Saturday March 4th. In the meantime, Scotland had lost to Ireland at Inverleith on February 18th in a match for which Lamond had not been selected. Finally brought into the side for the re-arranged match, Geo Lamond's international debut in the centre against a strong Welsh side was an auspicious one although he failed to convert the opening Scottish try from a relatively easy position. In a hard-fought 21-10 victory, he dropped a crucial goal midway through the second half which gave Scotland a 14-10 lead which they never relinquished. The Scotsman waxed poetical in its Monday match report:

"One and all, the team roused themselves to a final effort; the forwards pushing the Welsh pack all over the pitch while the halves stood ready and eager to accept any chance of getting in. That chance fell to Lamond. On the ball getting loose from the maul, he pounced upon it, ran a few yards, and then dropped a very pretty goal, the ball going high, but right between the posts."

Unsurprisingly, the Scottish selectors picked an unchanged side for the final championship match against England on March 11th at Blackheath, although one significant change had to be made with a new half back JI (Johnnie) Gillespie replacing RT (Robert) Neilson who was injured. The Scottish forwards were too strong for their English counterparts and Scotland won by the only try of the match when Gillespie chased his own kick ahead, outpaced the English defence and touched down just before the ball would have rolled over the dead ball line. The try was converted by the forward WJ Thomson and Scotland held on for a famous victory. Geo's rugby career was put on hold for a few years while he worked in Egypt on the construction of the three Nile barrages at Esnah, Assiut and Assuan. He returned to the UK in 1902 and worked on the construction of the Royal Edward Dock at Avonmouth. This gave him the chance to resurrect his rugby career with Bristol, one of the leading English west country rugby clubs, for whom he made 50 appearances and was club captain for much of the 1903-04 season. He was recalled by Scotland for his third and final cap against England at Richmond on March 18th 1905. The first player from the Bristol club to be capped by Scotland, his selection was something of a surprise. He hadn't played for Scotland for six years but the Edinburgh Evening News, after listing all those players who should have been picked before him, said:

"Lamond, however, is a heady player, rich in experience, and may come out all right."

He did come out all right. After a scoreless first half, Scotland pulled away and scored two tries to record an 8-0 victory over their oldest rivals. The local Bristol newspaper, the Western Daily Press, noted that Lamond had been one of four Gloucestershire players in the match and that the Scottish officials were "regretting that they did not play Lamond in the two other (Championship) matches". He returned to Egypt in 1906 to work on more engineering projects and retired from rugby. At the outbreak of war, he returned to the UK and was given a commission as a Captain in the Royal Engineers in 1915. He is buried in the Colombo (Kanatte) General Cemetery, one of 131 Kelvinside Academy pupils to lose their lives in the First World War.