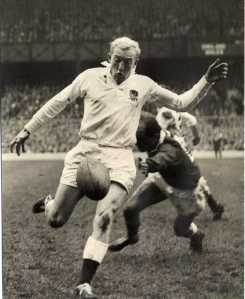 Richard Adrian William Sharp, a rugby player from Cornwall, played for his county 28 times, from 1957 to 1966, which then led him on to play for several other teams including the London Wasps, Bristol and not forgetting England of course. Born in September of 1938 Richard Sharp captained England to five nations success during the 1963 tournament against Scotland. Richard Sharp gained 14 caps for England during his career between 1960 to 1967. He started out with Redruth RFC in Cornwall and went on to play for the London Wasps and Bristol. Sharp played the position of Fly Half during his 14 cap England career and also went on tour with the British Lions in 1962. As well as playing rugby Sharp played cricket between 1957 and 1970. Richard gained recognition after scoring a forty yard try during the five nations tournament which led the 1963 England team to success with a 10-8 lead over Scotland giving England their 17th five nations title. As a result of this five nations game at Twickenham Stadium Richard Sharp earned his place on the World Rugby Museum's Wall of Fame. During the five nations tournament Richard Sharp scored 26 points after playing 7 games for England when tries were worth three points each.

About the Author - Ebony Jefferies is a pupil at St Ives School, Cornwall. She plays Inside Centre for Newquay Hornets, Cornwall and South-West England.

The World Rugby Museum would like to thank Ebony for contributing this tribute to Richard Sharp.