Maybe Arthur Wellesley, the Duke of Wellington, never really did say, "Being born in a stable does not make one a horse", but many Home Nations Rugby officials have also thought bloodlines trump place of birth.

At first glance you wouldn't fancy there were many, but all three of the Southern Hemisphere Rugby superpowers could chose a combined XV of their countrymen who have played in the Home Nations. It's not that these players were 'scouted' and convinced to travel north of the equator, but merely they happened to be in the British Isles - the richest seams for mining 'colonials' were the Universities, particularly Edinburgh (which provided medical studies), as well as Oxford and Cambridge. Whether in Britain to work or study, many opted to play a bit of rugger, caught the eye of national selectors, and on enquiry were found to possess a suitable bloodline. Some did reject the opportunity to play, but most gladly took it up - appearing in an international Rugby fixture isn't an invitation that comes across one's path often! Five Australians have also captained a team during a Home Nations series. 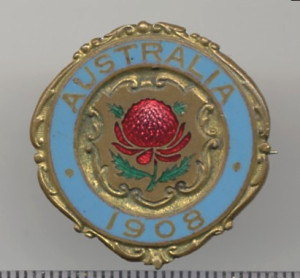 AN AUSTRALIAN XV James BEVAN : Wales 1881, 1 cap (and captain), three-quarter back. Born in St. Kilda, Melbourne, at age of seven was sent to Monmouthshire in Wales to live with relatives. Played Rugby for Cambridge University, Clifton and Newport (the latter just once). Since 2007 the Wallabies and Wales have played for the James Bevan Trophy. Charles WADE : England 1882-86, 8 caps, three-quarter back. Hailing from the Hunter Valley in NSW, he arrived at Oxford University in 1881 to study law after All Saints (Bathurst), King's School (Parramatta) and Sydney University. A powerful runner and tackler, in a career for England that spanned five seasons, he never once tasted defeat. Returning to Australia he played for the NSW Waratahs, became a NSW State Premier, and in 1918 was knighted. Reggie MORRISON : Scotland 1886, 3 caps, three-quarter back. Nephew of founder of Geelong College, played Aussie rules alongside Charles Brownlow for Geelong FC before studying medicine at Edinburgh University. Played in all three matches of Scotland's 1886 team. Returned to Melbourne and established medical practice. Sammy WOODS : England 1890-95, 13 caps (2 as captain), forward. Born in Ashfield, at 16 years old Sydney Grammar schoolboy sailed to England to complete his education at Silwood House, Brighton College and then Cambridge University. By the late 1880s was a powerful Rugby forward, playing in North v South trials, and was first chosen for England in 1890. Played Test cricket for Australia and England, and was still in Somerset County XI in 1910. ALEC TIMMS : Scotland 1896-1905, 14 caps (1 as captain), three-quarter back. Melbourne Grammar and Geelong FC (Aust rules), studying medicine at Edinburgh University, grandparents were Scots. Also member of 1899 British Lions tour. Prodigious drop-kicker. Remained in Britain, working as a doctor. Lyndhurst GIBLIN : England 1896-97, 3 caps, forward. The Hobart-born son of a prominent Tasmanian politician, Giblin had never seen a Rugby game until he arrived in England to further his education. Studying at University of London and then Cambridge, while at the latter he won selection for England. Also played for Barbarians and Blackheath. In 1898 he joined in the gold rush to Alaska and the Canadian north-west, returned home in 1904, and built a highly respected and prominent career in statistics and economics. Herbert BULLMORE : Scotland 1902, 1 cap, forward. An outside back for Ipswich Grammar, played for the Queensland Reds in 1894. After gaining medical degree at Edinburgh University, was late call-up for Scotland vs Ireland in Belfast. Grandfather of Australian media magnate Kerry Francis Bullmore Packer. Frank Sholl SCOTT : England 1907, 1 cap, wing three-quarter. Perth-born son of the Western Australian city's mayor, moved to England with his family when 13 years old. Garnet 'Jerry' PORTUS : England 1908, 1 cap, fly-half. Former Sydney University player, attended Oxford University (history/economics), but unable to break into the first XV, gained prominence after moving to Blackheath, twice playing for England (vs France & Ireland). After returning home became a Wallabies selector, and helped establish Rugby in Adelaide, coaching the South Australian XV. 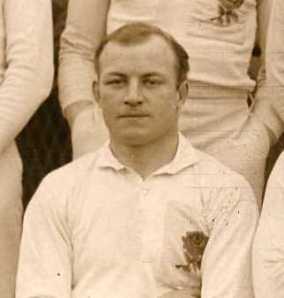 Leonard 'Bruno' BROWN : England 1911-14 & 1921-22, 17 caps (1 as captain), prop. A forward for Brisbane Grammar School, Past Grammars and Queensland (including vs 1908 British Lions). Studying medicine at Oxford University, made his debut for England in 1911. His try against Scotland at Twickenham in 1913 secured for England their first ever 'Grand Slam'. NSWRU rep on RFU committee 1922-49, RFU President '48-49, assisted formation of the Australian RU, and IRB granting full status to Australia, New Zealand and South Africa. Allan STEWART : Scotland 1913-14, 4 caps, wing three-quarter. Tasmanian born and bred, joined London Scottish RFC while studying at Royal London Hospital. An astonishingly fast sprinter, in February 1914 crossed for 4 tries against Ireland at Inverleith. Hector FORSAYTH : Scotland 1921-22, 7 caps, fullback. After attending King's School in Parramatta, he moved to Oxford University, where both England and Scotland officials sought to woo him. He chose Scotland, and played two solid seasons, until overlooked in favour of Dan Drysdale. Playing for Blackheath in 1923 critics judged him the best fullback in all English club Rugby, but, of course, he was now ineligible for England. AC 'Johnnie' WALLACE : Scotland 1923-26, 9 caps, wing three-quarter. Sydney Grammar School and Sydney University player, advanced to the NSW team for their 1921 tour to New Zealand. Entered Oxford University to study law in 1922, and via his family heritage, was invited to play for Scotland, and was a member of their first Five Nations 'Grand Slam' team in 1925. Over the winter of 1927-28 he played against all five Home Nations, including Scotland, when captain of the famous NSW Waratahs team that toured Britain and France. 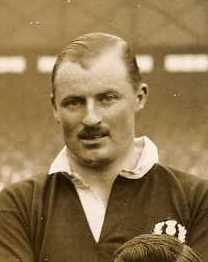 Ian SMITH : Scotland 1924-33, 31 caps, wing three-quarter. Born in Melbourne but moved to Edinburgh while still a youth. At Oxford University made it clear his Rugby allegiance was to Scotland (where his parents had been born). Tagged 'the flying Scotsman' he ran in 24 tries for Scotland in his Five Nations career, and twice grabbed 4 tries during the 1925 'Grand Slam' series. Also played for the 1924 British Lions in South Africa. David CAMPBELL : England 1937, 2 caps, flanker. Born near Adelong in rural NSW, former King's School (Parramatta) student was playing Rugby at Cambridge University when he accepted an invitation to turn out for England. A hard-working forward, Campbell was most fondly remembered for his last minute 50m try-scoring run at Twickenham that gave the English a 9-8 victory over Ireland. He later became a noted Australian poet. Basil 'Jika' TRAVERS : England 1947-49, 5 caps, flanker After serving in the AIF in WW2, Travers was a back-rower in Sydney University team that won the Shute Shield in 1945. A Rhodes Scholar recipient, he left Australia to study at Oxford University. Travers gained six caps for England over three seasons, including a match against 1947/48 Wallabies at Twickenham. Trumpeted as "England's most spectacular forward since the war" (he could also drop/place kick goals) his 1950 book Let's Talk Rugger became one of the most widely read texts on the game. Doug KELLER : Scotland 1949-50, 7 caps, (4 as captain), flanker Former Sydney Grammar, Sydney University and Drummoyne player, won a place in the 1947/48 Wallabies that toured Britain and North America. After the tour he travelled back to England to study medicine, joined London Scottish (his grandmother was a Scot), and was chosen as Scotland captain in his first match. After the 1950 Home Nations he returned home to Sydney. Hugh 'Larry' WEBB : England 1959, 4 caps, prop. Melbourne-born but left Australia when still a schoolboy, and later joined the British Army. Brian SMITH : Ireland 1990-91, 7 caps, fly-half. Born in St. George, 400km west of Brisbane, he played for Queensland and the Wallabies, including the inaugural World Cup in 1987. While at Oxford University, he was brought into the Ireland team, qualifying on heritage via an Irish grandmother. Played four seasons of rugby league in Sydney before retiring, and is currently director of Rugby at London Irish RFC. Robbie Russell : Scotland 2000-05, 11 caps, hooker. After Brisbane Anglican Church Grammar School and Queensland University, in the late 1990s he joined Aberdeen GSFP and then Edinburgh Reivers. Qualifying for Scotland by his grandfather, he played in both the 1999 and 2003 Rugby World Cup tournaments. He later moved below the border to Saracens and London Irish. Nathan HINES : Scotland 2003-11, 34 caps, lock. From Wagga Wagga in southern NSW, Hines was backpacking across Europe in 1998 when a short stint with Gala RFC in Scotland, aided by his Scottish lineage, turned into a professional Rugby career. After moving to Edinburgh he was first chosen for Scotland in 2000, facing the All Blacks in Auckland. He appeared 77 times for Scotland, and was a member of the 2009 British and Irish Lions. Ben HINSHELWOOD : Scotland 2004-05, 4 caps, centre three-quarter. Melbourne-born son of 1960s Scotland and British Lions international Sandy Hinshelwood, played for Sydney University before moving to England for work. Dan PARKS : Scotland 2004-12, 31 caps, fly-half. Born in Sydney he played for three suburban clubs before moving to England and joining Leeds Carnegie for a short stay in 2001. Two years later the goal-kicking fly-half signed on with Glasgow Warriors, and utilising his Scottish ancestry (grandfather), was elevated to the Scotland team in 2004, and when it was over in 2012 he had played 67 matches and two World Cup tournaments for his adopted country. Ben MACDOUGALL : Scotland 2006, 1 cap, centre three-quarter. A rugby league player in Australia, qualified for Scotland via his Glasgow-born grandfather. © Copyright - Sean Fagan 2014