Anzac Day is the national day of remembrance in Australia and New Zealand. It coincides with the commencement of the First World War Gallipoli Campaign which began on the 25th April 1915. The Gallipoli campaign was an attempt by Allied Forces to take control of the northern bank of the Dardanelles Strait, opening up a line of attack on the Ottoman capital Constantinople (now known as Istanbul). The operation was led by the Mediterranean Expeditionary Force, which included the Australian and New Zealand Army Corps alongside British, French, Indian and Canadian contingents. Despite hard-won early land gains the campaign was a military catastrophe for the Allies. Of an estimated 560,000 Allied men and women involved in the campaign more than half became casualties. On the first day of the landings (Anzac Day) Australia lost two gifted, but very different, men who had represented their country before on the field of international rugby. 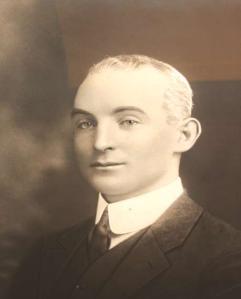 Teddy Larkin was born in 1880 to a mining family in Newcastle, New South Wales. At 14 he won a scholarship to St Joseph's College in Sydney. He stood out in sports, notably boxing and rugby, as well as displaying leadership qualities from an early age. His feats didn't go unnoticed and at the age of 23 he was selected to play for New South Wales against a touring New Zealand side. He impressed sufficiently and shortly after was selected to represent Australia against the visitors in the first edition of a sporting contest that would come to be known as the Bledisloe Cup. But Larkin's achievements were not limited to the rugby field. A persuasive speaker and exponent of socialist values he was elected to the NSW state parliament as Labor MP for Willoughby in 1913. As a politician he would not be pressed into volunteering for active duty but his personal morality intervened and, citing his 'duty', he enlisted as a private in the 1st Australian Imperial Force. 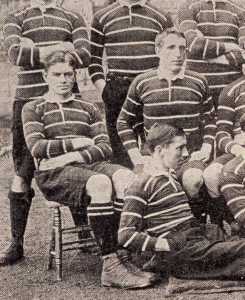 Blair Swannell was born in rural Buckinghamshire, England in 1875. A burly and uncompromising back-row forward with Northampton, he was selected and played for the touring side that would become known as the British and Irish Lions in 1899 and 1904. His try in 1904 helped his side defeat the Wallabies but Australia, by this time, had made a deep impression on Swannell and when the tourists departed he opted to stay and make a new life down under. The following year he was selected for Australia and toured New Zealand, where his captain remarked that Swannell's fiery brand of rugby was akin to 'trained violence'. In 1914 Swannell, who had served three years with the British Army in the Boer War, enlisted with the Australian Imperial Force and was promoted to the rank of Major. Both he and Larkin were amongst the first battalions to land, at what would become known as Anzac Cove, on day one of the Gallipoli Campaign. They were met with immediate fierce resistance and came under heavy fire during their assault on a hill emplacement named Baby 700. "Larkin it is said was among a rush of Australians that advanced so far quickly over the first rugged hills that they were cut off from their support. When the Turks hit back Larkin was wounded, and with his comrades unable to slow down to collect him, he was left behind. They found his bayoneted body a month later." "Meanwhile Swannell, with hostile bullets coming from all directions, had spotted a sniper, gave the range to a rifleman alongside, and ordered him to shoot. He missed, Swannell snatched the solder's rifle, dropped to one knee and shot the Turk dead. A second later Swannell took a bullet through the head." "The loss of both men was deeply felt by those at the front and at home. The politician-footballer Larkin had been a popular figure, while Swannell was for a time secretary of the Sydney RU, a referee, involved in hockey, swimming and took a senior officer role when compulsory military training started." The names Teddy Larkin and Blair Inksip Swannell are recorded in a cemetery close to where they fell. They are remembered on Anzac Day, the day on which they lost their lives. By the time of the Armistice in November 1918, they had been joined by a further eight Wallabies.

You can find out more about Fallen Anzac Wallabies here. The World Rugby Museum would like to thank Sean Fagan for his assistance with this article. Please like the World Rugby Museum on facebook and follow us on twitter to receive further tributes to the international rugby players who fell in the Great War.