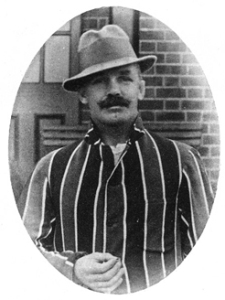 Alexander Findlater Todd, known to the family as "Fin", was born in Lewisham, South London, one of six children of Bruce Beveridge Todd and his wife Phoebe. His father was a wine merchant in the firm of Findlater, Mackie, Todd & Co Ltd, for whom Alexander briefly worked before the war. The company became part of Waitrose in the 1990s.

Alexander was educated at Mill Hill School and then went up to Caius College, Cambridge, from where he won three rugby Blues in the mid-1890s. Like many of his contemporaries he played a wide variety of sports, including hockey and lawn tennis but, second to rugby, he excelled at cricket and went on to play for WG Grace's London County, and in the Minor Counties for Berkshire. After coming down from Cambridge in 1896, he went on tour to South Africa, with what later became known as the British and Irish Lions. Demands on rugby tourists were significantly different in those days, and Todd wrote home from Kimberley to say "I went to lunch with the rest of the team to Cecil Rhodes' place. Miss Rhodes, his sister, presided and gave us a very good spread, with Veuve Cliquot '89 to drink. It was a good job that we had an hour or two to spare after lunch before playing." His two caps for England both came in 1900 whilst with the Blackheath club (he also played for Rosslyn Park), in the matches v Ireland and Scotland. England won the first of these 15-4 at Richmond, and then drew 0-0 in Edinburgh. Military service had started for Todd in the Boer War. In 1900-1901 he served as Squadron Commander of Roberts' Horse and Carrington's Horse, being wounded at Diamond Hill. At the outbreak of World War 1 he was already aged 41, but volunteered, and went as a Lieutenant into the Norfolk Regiment. By October he had been sent to France and was already Mentioned in Despatches and gazetted Captain in the 3rd Bn, attached to the 1st. He was shot through the neck whilst in the trenches during the Battle of Hill 60, south of Ypres, on 18 April 1915 (the day after returning from leave) and died of his wounds three days later.