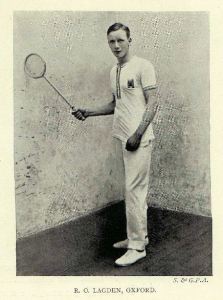 Ronald Owen Lagden was born in Maseru, Basutoland (modern Lesotho) on the border of present day South Africa, one of five children of Sir Godfrey Yeatman Lagden KCMG and Lady Lagden. Sir Godfrey was a career civil servant, mostly serving in West and South Africa, and his wife was the eldest daughter of the first Bishop of Pretoria. Ronald began his formal education at Mr Pellatt's School in Swanage, which was a notoriously spartan and uncomfortable preparatory school on the Isle of Purbeck, before going on to Marlborough College and then, as a Rhodes Scholar, to Oriel College Oxford where he took an honours degree in science and chemistry. At Marlborough and Oxford he excelled in a range of sports, winning blues at rugby, cricket, hockey and racquets. His single cap for England came in the 1911 match v Scotland at Twickenham, where England won 13-8. Lagden, playing in the back row, converted two of England's three tries. In 1912 he took a post at Harrow School as a mathematics master, continuing to play rugby for Richmond, where he was vice-captain in 1912-13. 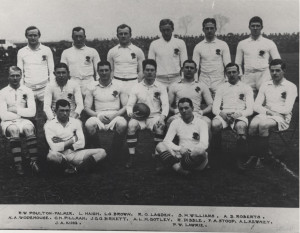 Having been an active member of the Officer Training Corps, attaining the rank of Lieutenant whilst at Oxford, he joined the Supernumerary Army Reserve in 1912 and, come the war, the 6th Battalion Kings Royal Rifle Corps. He went to France at the end of February, 1915, and was posted to the 4th Battalion, and a few days later was called upon to lead his Company in an assault on the German trenches at St. Eloi, south of Ypres. His Colonel later wrote that "the task was an impossible one, and D Company did all that was humanly possible to carry it out." When last seen Captain Ronald Lagden was lying badly wounded on the parapet of the German trench and, although reported as "wounded and missing," it was noted that "there is little hope of his survival". His date of death is given officially as 3 March 1915. He was Mentioned in Despatches.