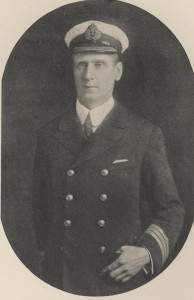 If Charles Taylor hadn't decided to pursue a naval career he might never have become a rugby player. He was born in Ruabon, north Wales on 8 May 1863, the son of Reverend Alfred and Annie Taylor. His father was headmaster of Ruabon Grammar School, where Charles was educated.

North Wales has always been soccer country so, unsurprisingly, in his youth Charles was an association footballer, and a gifted one at that. However, at sixteen he left his Denbighshire home to join HMS Marlborough, a shore establishment in Portsmouth for the training of Royal Navy engineer officers. There the preferred sport was rugby - they had a decent fixture list and were members of the RFU - and so Charles was converted into a three-quarter. Any reluctance he may initially have felt was quickly dispelled as he proved to be a natural for the game and he soon became a "crack" member of the team. By the time he was twenty, Charles had come to the notice of the Welsh selectors. He was fast, useful with the ball in hand and a good tackler but Charles was best known for his kicking. His particular speciality was a legacy from his soccer days: the fly kick to touch, a potentially dangerous tactic at any time but one which Charles could usually bring off with extraordinary accuracy. Well liked for his charm, humour and, not least, his post-match party piece on the banjo, he was clearly an asset for any rugby side. Charles made his international debut in January 1884 on the wing against England at Leeds where he "put in some wonderful flying kicks". He also nearly achieved lasting fame by helping to bring off a sensational victory with a drop goal attempt which unfortunately was disallowed. However, according to the England full back, Henry Tristram, who was in a much better position to see than the officials, the kick was good. It was, nevertheless, a memorable year for Charles: a few months later he came second in the pole vault at the AAA national championships. Although he played all his club rugby in England, Charles became an automatic choice for Wales over four seasons, winning nine caps in all and missing only one through injury. No doubt with a nod to his naval background, the press therefore referred to him as "the sheet anchor" of the team. His time in the Welsh jersey wasn't a period of great success but there were signs that Wales were improving. Two wins out of two against Ireland, that near miss at Leeds and draws with England and Scotland were indications that, with Charles's help, Wales now had to be taken seriously. After six years at HMS Marlborough, Charles transferred to the Royal Naval College Greenwich in 1885 and so was able to join one of the best teams in the country, the powerful Blackheath club. He also helped set up London Welsh at this time but only turned out for them on the odd occasion. Playing against Scotland on 9 January 1886, Charles made rugby history as a member of the first-ever four three-quarter line-up in international rugby. His final international appearance was in the victory over Ireland in March 1887, when Wales finished second in the championship, achieving their highest placing so far. A few months later, Assistant Engineer Charles Taylor was posted to his first ship for service in the Mediterranean and his senior rugby career had come to an end. A highly professional and efficient officer, he had a distinguished career in the Royal Navy. He was promoted to Engineer-Captain in 1912 and undoubtedly would have risen further had he survived. Soon after the outbreak of the Great War, he was posted to HMS Tiger, in the First Battle Cruiser Squadron, which was under the command of Rear Admiral Beatty. Charles held a position of considerable responsibility as the Squadron Engineer Officer. Unknown to the enemy, by late January 1915, the British were intercepting their radio traffic and breaking into their naval codes. So when a squadron of German ships ventured out into the North Sea, the Royal Navy was waiting for them. On 24th January 1915, Beatty caught the Germans near the Dogger Bank. During the battle, one of the German capital ships was sunk with the loss nearly a thousand lives, though the rest of the squadron managed to escape. No British ship was lost and only fifteen Royal Navy personnel were killed. However, it was HMS Tiger which suffered most of the British casualties when a shell hit a compartment below the conning tower. Engineer-Captain Taylor was nearby, calmly observing the technical performance of the ships, when, tragically, he was caught in the blast and killed instantly. His body was returned home and he lies today in Tavistock New Cemetery, Devon. He left a widow and three children. At fifty-one, Charles Gerald Taylor was the fourth oldest rugby international to die in the Great War. The Battle of Dogger Bank had added the first Welshman to the game's international roll of honour. Charles Taylor is commemorated on memorials at Ruabon, Blackheath FC, the Institution of Mechanical Engineers and the Millennium Stadium.