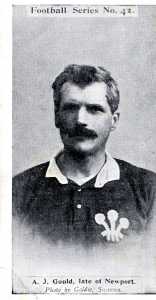 Monkey Gould- so good they gave him a house...

The three Gould brothers from Newport and the two Bancroft brothers from Swansea between them played for Wales 92 times between 1882 and 1901. Robert Gould was born in 1863 and won 11 caps between 1882 and 1887. His first 9 caps were consecutive by which time his younger brother Arthur born in 1864 had started on his long international career which encompassed 27 caps for Wales between 1885 and 1897. John Arthur Gould was the first superstar of the rugby game. A supremely skilled footballer able to play in all positions in the back line, he scored 12 points from 4 tries, 1 conversion and 2 drop goals. He played Full Back in his first two internationals and then played in the centre for the rest of his international career. Although he was captain of Wales on a record 18 occasions, his captaincy record appears less impressive with 8 wins, 1 draw and 9 defeats but he was captain throughout the 1893 season when Wales won their first Triple Crown and he was a talisman for Welsh rugby. 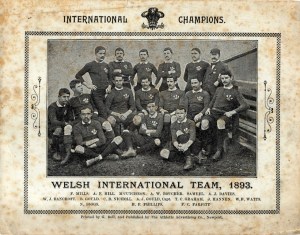 Such was the adulation he received and his perceived influence on the development of Welsh rugby that the Welsh Rugby Union presented him with the title deeds of the house on his retirement. This caused uproar in the International Board which was already grappling with the alarming growth of professional rugby following the 1895 schism between the Rugby Football Union and the Northern Union. As a result, matches against England and Scotland were cancelled in the 1897-98 season and the furore only subsided when Arthur Gould stated that he had no further wish to play for Wales again. A third Gould brother, Bert, born in 1870 was to win only 3 caps in 1892-93 but earned immortality by scoring the only try of the match against Ireland in March 1893 which secured the first Welsh Triple Crown. 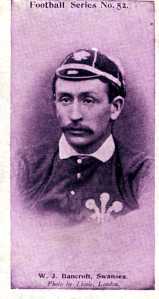 In January 1890, William (Billy) Bancroft was chosen as a reserve at Full Back for the Welsh match against Scotland on February 1st. The chosen Full Back was Tom England of Newport who was to earn fame in a most unlucky way. Injured in the week before the match, he had to withdraw and Billy Bancroft took his place. Bancroft born in 1871 went on to win 33 caps without interruption over a period of 11 years between 1890 and 1901 and Tom England never had another chance to win his coveted and, according to the papers of the day, deserved cap. He captained Wales 11 times (7 wins and 4 losses) and was captain of the 1900 team that won the Triple Crown for the second time. He entered Welsh rugby folklore in the match against England in 1893. With Wales losing 9-11 in the closing stages of the match despite two tries from their captain Arthur Gould, a penalty was awarded to Wales near the touch-line. Ignoring Gould's trenchant advice to take a place kick, Bancroft proceeded to drop a magnificent goal which won the match, exclaiming as the ball went through the posts "It's there Arthur!".

Eight years after Billy Bancroft retired, his younger brother Jack, born in 1879, assumed the role of custodian for Wales. He played 18 times at Full Back between 1909 and the outbreak of the 1st World War. His first 9 caps were consecutive until injury prevented him playing in the match against France in March 1912. Recalled to the side to face Ireland in March 1913, the last match of the Championship, he played throughout the 1914 season. A renowned kicker, he ended his career with 88 points from 38 conversions and 4 penalty goals thereby beating the Welsh scoring record of his brother Billy who had scored 60 points in his 33 internationals from 20 conversions, 4 penalty goals, 1 drop goal and 1 goal from a mark. In the 102 international matches played by Wales before the 1st World War, at least one of the Gould or Bancroft brothers appeared in 42 out of 46 matches up to the end of the 1898-99 season and 66 out of 102 matches up to the end of the 1913-14 season.