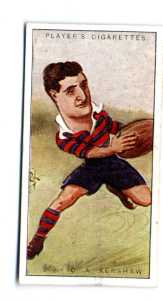 The concept of the all-round sportsman was one of the most significant role models to emerge in the second half of the 19th century. In an era when to be a "good sport" was a distinct asset both in athletic and social terms, the playing of a number of different sports to a high standard frequently led to important opportunities for professional and social advancement for a young sportsman. Prior to 1914, eleven English rugby internationals played cricket at an international level and numerous other rugby internationals, such as John Daniell (captain of the England rugby team at the beginning of the 20th century and an England selector from 1913 to 1939); JF (James) Byrne (an England captain and British Isles full back between 1894 and 1899); and EW (Edward) Dillon (4 caps as an England centre in 1904-05) played county cricket for many years. If AN (Monkey) Hornby and AE (Andrew) Stoddart are the most famous of the dual rugby and cricket internationals, it was still possible for a non-international cricketer to win fame by a single exploit. HT (Octopus) Gamlin, another great England full back who won 15 caps at the beginning of the twentieth century, played only 3 first-class cricket matches in his career. However, playing for Somerset against Lancashire in only his second county match at the age of 17 in July 1895, he dismissed Archie MacLaren at Taunton at the end of his innings of 424 in which he surpassed the previous world record individual score of 344 made by WG Grace in 1876. 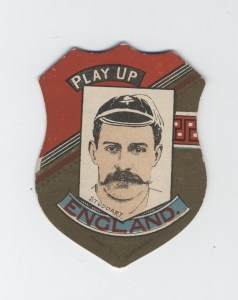 Four England rugby players went on to represent other countries at cricket. WH (later Sir William) Milton played twice for England in 1874-75 as a half back and centre and after emigrating played 3 tests for South Africa between 1889 and 1892 when he was captain. RO Schwarz and RHM Hands, one of three South African brothers who played test cricket, both played rugby for England and cricket for South Africa. In the history of test cricket only fourteen players have played for two different countries and two were England rugby international captains. SMJ (Sammy) Woods, an Australian-born stalwart of Somerset county cricket club for many years, played for Australia against England in 1888 and England against South Africa in 1896; and Frank Mitchell played for England against South Africa in 1899 and then captained South Africa against Australia and England in the Triangular Tournament of 1912. RH (Reginald) Birkett, scorer of the England try in the first ever international against Scotland in 1871, was one of three rugby internationals who also played soccer for England. JW (John Willie) Sutcliffe was a try scorer in his only match against the NZ Maoris in 1889. He turned to football and became a well-known goalkeeper, winning five caps for England and playing on the losing side for Bolton Wanderers in the 1894 FA Cup Final. Some notable 19th century athletes, while not accredited internationals, also played rugby for England. Marshall J Brooks, full back for England against Scotland in 1874 was the world record holder in the high jump from 1876 to 1887; Henry A Bryden, winner of one cap against Scotland in 1874, was world record holder for the mile; and HE (Harry) Kayll, one of the two full backs against Scotland in 1878, set a new world record for the pole vault in August 1877. 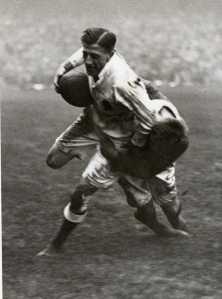 After the 1st World War, fewer sportsmen were able to attain such heights but some notable cricketers from what was then known as the Dominions came over to study at British universities, primarily Oxford and Cambridge, and represented England at rugby. The English full back and captain in the 1930s, HG 'Tuppy' Owen Smith, and the English centre three-quarter from the 1940s, CB (Clive) van Ryneveld, both returned to their native country and played cricket for South Africa. The New Zealander, MP (Martin) Donnelly won only one rugby cap for England in 1947 while a student at Oxford and continued a distinguished test cricket career on his return. Other sports were represented in the inter-war years. CA Kershaw, England scrum half in 16 consecutive matches after the 1st World War, represented Great Britain in fencing at the 1920 Olympic Games at Antwerp. SW Harris, South-African born England winger in 1920 and British Lion in South Africa in 1924, played tennis regularly at Wimbledon and represented South Africa in the Davis Cup in 1931. HL (Leo) Price, scorer of one of the fastest tries in international rugby against Wales at Twickenham in 1923, played 13 times for England at hockey and had the unusual distinction of representing his country on two successive Saturdays at two different sports. PD (Peter) Howard won 8 caps in 1930-31 captaining England against Ireland in 1931 and was a member of the British World Championship bobsleigh team in 1939. He subsequently became a leading figure in the Moral Re-Armament movement. Speedsters on the wing have always had a place in international rugby. AG Butler, England wing with 2 caps in 1937, represented Great Britain at athletics in the same year and CB (Cyril) Holmes ran for Great Britain in the 1936 Berlin Olympic Games although he did not win his 3 rugby caps until international matches resumed after the 2nd World War in 1947. JA (John) Gregory won his only cap on the wing for England against Wales in 1949 but he represented Great Britain as a sprinter at both the 1948 and 1952 Olympic Games. JRC (John) Young, an exceptionally fast winger with 10 England and British Lions caps between 1958 and 1961, had to pull out of both the 1956 Olympic Games and the 1958 Empire Games due to injury. 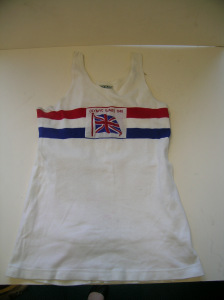 The most recent England double international at rugby and cricket was MJK (Mike) Smith who played 50 times and captained England at cricket but won just the one rugby cap at fly half against Wales at Twickenham in January 1956.