Around 70 rugby players up to 1965 suffered the unfortunate experience of being picked to play for their country in an international or test match and, for a variety of reasons, were unable to play and were never "capped". The reasons for their withdrawal where known to range from injury and illness to second thoughts on the part of selectors and deaths in the family. In the age before substitutes were introduced worldwide in the 1960s, almost all of these players never received a second invitation. And many of those that did receive a second chance were still not able to claim that elusive cap. The problem for an aspiring Springbok in the post-WW1 period was that South Africa played only 28 tests between 1919 and 1939. They undertook four overseas tours during that period but there were at times a number of years between each home test series. Only four players originally selected for South African test matches remained uncapped in the 50 matches played by the Springboks between 1891 and the outbreak of the 2nd World War - and the only player to suffer this fate between the wars was Leon Barnard, a winger from South Western (Cape) Districts (SWD).

Leon Strydom Barnard was born on 10 August 1909 in Knysna in the Western Cape. He came from a large farming family of 14 children and is likely to have played rugby from an early age. When the Australian touring team arrived in June 1933, they were the first touring side to visit South Africa since the All Blacks had toured in 1928. After performing impressively in the 1933 trials, Leon Barnard was selected to play in the first of five tests against the touring Wallabies at Newlands on 8 July 1933. He was not quite 24 years of age and his rise to the top had been steady if unspectacular. He would have been only the fourth SWD player to obtain Springbok rugby colours and he would have been playing alongside his former SWD provincial teammate, the redoubtable forward WF (Ferdie) Bergh. In his 1956 book 'Springboks down the Years', Danie Craven (scrum half in that 1st test match) explained what happened. Barnard "went down to Cape Town for the test but, being honest, told the selectors that he has a boil on his arm and he feels they ought to know about it. At the same time he said that he could play." However the Springbok selectors exhibited singular ruthlessness and immediately replaced him with the 19 year old Freddie Turner, destined to win 11 caps and become one of South Africa's finest pre-war three-quarters. Craven goes on to say that "The least the selectors could have done was to have given Barnard one Test. Now I believe he is not entitled to his colours." Leon Barnard did play against the Wallabies later in their tour when he scored a try for SWD in their 14-21 defeat on 16 August 1933 but he was never entitled to be called a Springbok. 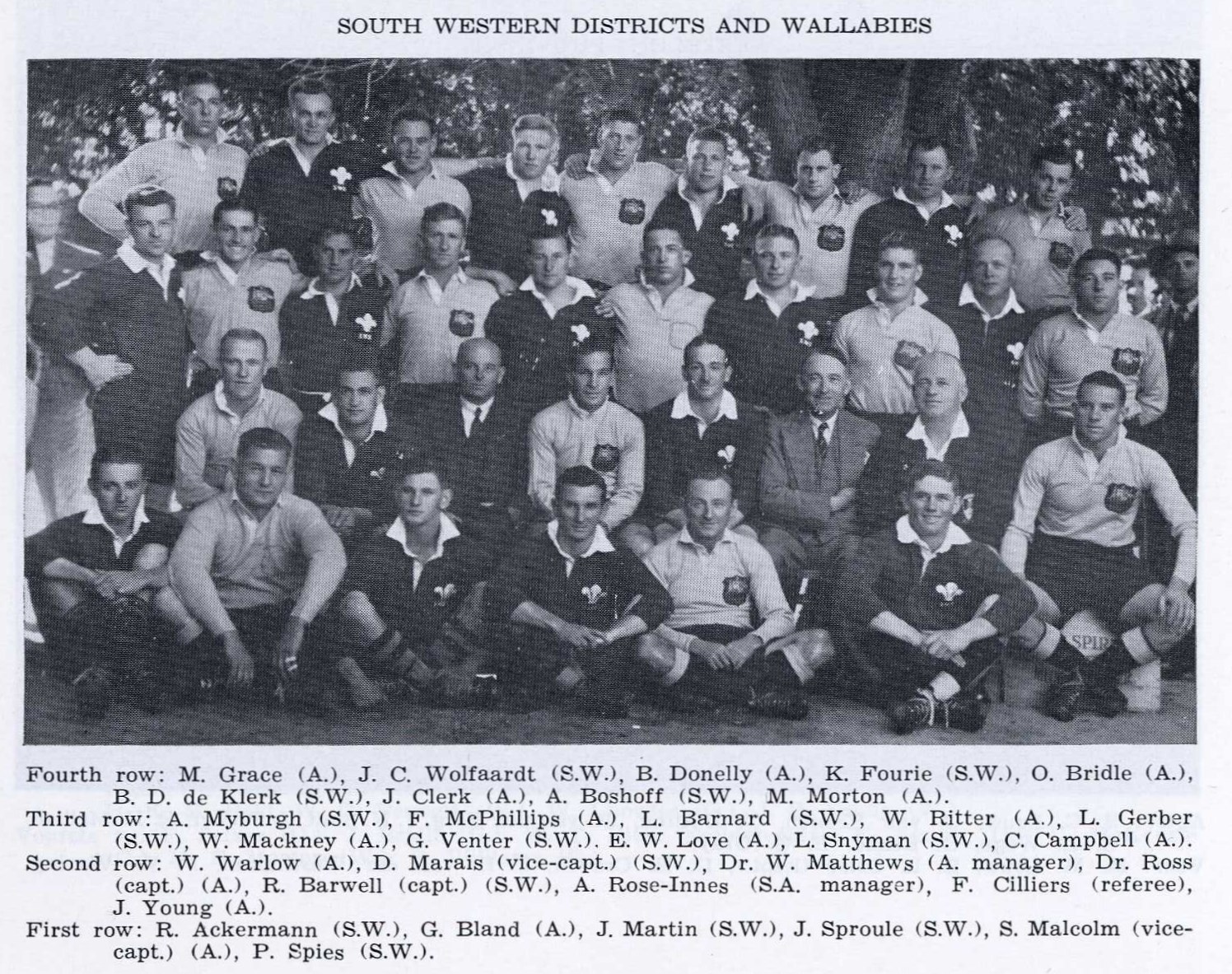 Little is known of the remainder of Barnard's rugby career. Further research in South Africa has shown that he became a teacher, married and had three children between 1937 and 1941 before dying at his home 'Woodlands' in Plettenberg Bay on 9 April 1957 at the early age of 47. He was not entirely forgotten in rugby circles though as Danie Craven mentioned that "he passed away recently" in his 1958 edition of "Springbok Annals".

About the Authors - A professional musician and arts administrator, Richard Steele has had a life-long love of sport. He has been on the committee of the World Rugby Museum at Twickenham since 2005. David McLennan is a historian, archivist and rare book dealer at Select Books in Cape Town. He co-authored the book "Rugby at Newlands - A History in 50 Test Matches 1891-2015" published in 2015.