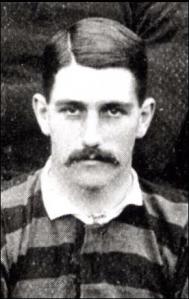 Charles Edward Wilson, who was born in Fermoy, Co Cork into a military family, was the first of 27 England rugby internationals to die in service during World War 1. After education at Dover College he joined the army in 1892 and, after passing out from Sandhurst, joined the Queen's (Royal West Surrey) Regiment. During the Boer War he was seconded from his battalion to the staff and saw action at the Relief of Ladysmith and Spion Kop, from where he gained the Queen's Medal with two clasps, the King's Medal with two clasps and was Mentioned in Despatches. Charles Wilson, like so many Army officers, had played rugby for his College, and went on to play for his regiment, for the Army, for Blackheath and Surrey. He played only once for England, at the Richmond Athletic Ground on 5 February 1898 v Ireland. England lost 6-9. Although England subsequently drew (v Scotland) and won (v Wales), the championship that year was not completed due to a dispute between Scotland and Wales. 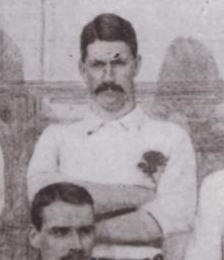 He was promoted to Captain in 1901 and on the outbreak of war, as a regular soldier in Britain's relatively small full-time army, was immediately sent overseas with the British Expeditionary Force as Adjutant of the 1st Battalion of the Queen's (Royal West Surrey) Regiment. Their history records them at Paissy Ridge in mid-September 1914 in the First Battle of the Aisne. Here, in the face of formidable German forces occupying a key position, Sir John French ordered the troops to dig trenches. This, in a small way, set the pattern across the whole of the Western Front. After two days (15/16 September) under enemy shell fire, the activity increased and the Queen's was called up to redress the balance. The support companies were turned out by Captain Wilson. By 2.30 pm on 17 September 1914 Wilson had been mortally wounded by a shell just after bringing up the supports. Wilson was found sometime after he was hit, lying in the field within a few yards of where he had left the company to go to report to the Colonel. He died at 8pm. He was 43. Shortly before his death he had been awarded the order Chevalier of the Legion d'Honneur. His wife Mabel, whom he had married in 1896, pre-deceased him. They had two sons, Royal Claude and Hugh Edward. Hugh served with his father's regiment in WW2, losing his life in Tunisia in 1943.