There are many personalities in the history of rugby union who have played a pivotal part in the development of the sport. Few though have played a significant part as both player and referee in matches that are still recalled generations later, and then served their country as an administrator for the next thirty years.

John Dewar (Jack) Dallas was born in 1878. Educated at George Watson's College in Edinburgh, he played his rugby for Watsonians and Edinburgh as a forward and captained Watsonians for five seasons from 1899. He represented Edinburgh in the 34th annual Inter-City match against Glasgow in December 1902 alongside three of his fellow Watsonians in the pack and led his club to their sixth Championship title in 1902-03. The match ended in a scoreless draw and although Dallas is not mentioned by name in The Scotsman's report of the match, he must have impressed the watching selectors. 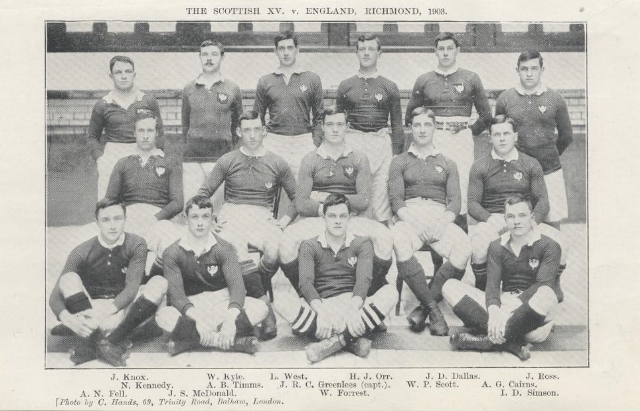 Jack Dallas won his only cap as a forward against England at Richmond on 21 March 1903 where he and Jimmy Ross of London Scottish were late replacements for the legendary forwards "Darkie" Bedell-Sivright and Mark Morrison, both captains of British Lions touring parties. Dallas scored Scotland's first try in their 10-6 victory which gave Scotland their fourth Triple Crown. It was to be his only cap. At the end of that season he played in the Watsonians Seven, the first Scottish Seven to compete from outside the Borders, which lost to Gala in the Final of the Melrose Sevens in April 1903. He was described in the Watsonian centenary history as "a grand forward in the line-out and an outstanding place kicker". He led Watsonians throughout the 1903-04 season and then turned to refereeing.

It was a curious set of circumstances that led to Dallas being chosen as the referee for the final international of the New Zealanders' all conquering tour against Wales in December 1905. The All Blacks manager George Dixon had previously challenged the initial choices of the Welsh Football Union and rejected four suggested referees. The WFU then asked the Scottish Rugby Union to appoint a referee and the Union chose Jack Dallas who, unlike four other Scottish referees, had not refereed any of the All Blacks' previous tour matches. It was his first international as a referee and Dallas was to be involved in one of the most contentious refereeing decisions in rugby history. At half-time Wales led by a try to nil scored by their left winger Teddy Morgan, but it was expected that the All Blacks would come through to win in the second half. However there were warning signs that their much vaunted game was not at its best. The All Blacks were led by David Gallaher who had earned a formidable reputation as a marauding wing forward, but the well-known rugby correspondent EHD Sewell wrote of "the mercilessness, amounting almost to ferocity, with which JD Dallas of the Watsonians penalised Gallaher". However Wales played so well and tackled so ferociously that the All Blacks were restricted to just one attack deep into the second half which should have produced the try that would at least have drawn the game. The Daily Mail correspondent JA Buttery takes up the story:

"It was now that Wallace chafing under the prolonged inaction which the Colonial three-quarter line had endured, rushed with the desperation born of despair into the thick of the fray. Gathering the ball from an opponent's toe, he tore his way through every obstacle, and in a trice was speeding down the field, with Deans on his flank, and only two opponents to pass. It looked an absolutely certain try. Winfield went for Wallace a dozen yards from the line, but ere he could reach him the ball had been passed out to Deans racing down the touchline. He, too, was collared, but not before he had grounded across the Welsh line, though the referee -whose decision is bound to be accepted in such matters declared that he had been 'held up,' and ordered a scrum instead of a place-kick."

To the ends of their days - and Bob Deans was to die at the age of only 24 in September 1908 - the All Blacks who took part in the match swore that it had been a try and there was much criticism of the referee for not being up with the play. In his book, George Dixon described the referee as "somewhat slow, judged by a new Zealand standard - not with the whistle - but in the matter of keeping up with the play when any specially fast bit of work occurred." However, in a letter quoted in 'Fields of Praise' that peerless history of the first 100 years of Welsh rugby, Jack Dallas wrote:

"On Monday morning I was astonished to read in the papers on my return to Edinburgh, that Deans had 'scored' a try that I had disallowed. When the ball went back on its way out to Deans I kept going hard and when Deans was tackled he grounded the ball 6 to 12 inches short of the goal-line. At that moment he could neither pass not play the ball, and as I passed between the Welsh goal posts my whistle went shrill and loud. It is true that when I got to the spot to order a scrum, the ball was over the goal-line, but without hesitation I ordered a scrum at the place where Deans was grounded. I never blew my whistle at the spot. It had gone before. No try was scored by Deans."

Despite the furore that his decision caused, this was not to be the only international for Jack Dallas as a referee. He went on to referee seven further internationals between 1908 and 1912 and was one of only six referees to officiate at eight or more matches of the 293 official internationals played prior to the 1st World War. In 1908 he refereed the Wales v Ireland match in Belfast in which Wales pulled away in the closing stages to win 11-5 and secure their fifth Triple Crown. In 1909, he was the referee for two internationals. The opening match of the Championship saw Wales defeat England at Cardiff by 8-0 at the beginning of a season in which they won all five matches including those against Australia and France. Jack Dallas's second match that season was Ireland v England at Lansdowne Road where England secured a convincing victory by 11-5. He was chosen to officiate at the first international at Twickenham between England and Wales on 15 January 1910. Once again Jack Dallas presided over a historic match. The first England try was scored within two minutes by FE Chapman (without Wales having touched the ball) and England's display in the first half was regarded as their finest for many years. Later that season, he again refereed a Wales v Ireland match in which Wales with an all-Cardiff three-quarter line won 19-3 after the Irish pack had dominated the game for the first sixty minutes. In 1911, he was chosen to referee the Ireland v England game at Lansdowne Road. Ireland won narrowly 3-0 with a try by T Smyth, captain of the British Isles tour to South Africa in 1910, twelve minutes from time after a miskick close to the English try line. Jack Dallas refereed his final international Ireland v Wales in Belfast in March 1912. The match is chiefly recalled for the withdrawal of the chosen Welsh half backs Billy Trew and Dickie Owen who preferred to play for Swansea that day. Despite a 5-0 lead for Wales at half-time, their replacements, Walter Martin and Tommy Vile, were unable to stem the tide as the Irish captain and fly half Dicky Lloyd with his forwards drove the Irish team on to a deserved if unexpected victory by 12-5. He remained involved with rugby for the rest of his life.

He represented the East of Scotland on the Committee of the Scottish Football Union from 1905/06 to 1910/11 and was a Special Representative on that committee from 1914/15 until his death in 1942. He served on the Committee of the International Rugby Football Board from 1912 to 1939 as one of the two Scottish representatives on the IRFB. During his time on the committee, there were numerous revisions to the laws and a number of these concerned the duties of referees. He authored an important Memorandum adopted in October 1923 which dealt with "the duties of Referees to enforce the penalties incurred through breaches of the Rules". He also served on an IRFB sub-committee in 1937 on "the method of appointing Referees for International Matches" and the duties of referees in those matches. He can be seen in a photograph [below - Dallas far left] as the Scottish delegate on the IRFB official welcoming party for the New South Wales "Waratahs" touring team when they arrived at Plymouth for their UK tour on 31 August 1927. Outside his rugby commitments, he presided in the Aberdeen Sheriff Court for many years and was Chairman of the Aberdeen Royal Infirmary. He died in Aberdeen on 31 July 1942. Although his standing as a referee in rugby history has always been a source of controversy, and particularly in New Zealand, the tributes after his death in the Aberdeen Weekly Journal of 13 August 1942 speak of his legal acumen, his extensive knowledge of rugby and his deep humanity.