Today we begin a series of biographies by David Smith, covering some of the British & Irish Lions who served with the RAF. Rory is featured in the World Rugby Museum's RAF at 100 exhibition, showing until November 2018.

Rory Underwood was born on 19th June 1963 in Middlesbrough. Having spent his early life in Malaysia, the family returned to England in 1976 and he was educated at Barnard Castle School. He joined the RAF in 1983 having already played for England Colts, Durham and Yorkshire and while undergoing his training at Cranwell he began a fourteen-year association with Leicester, for whom he was to score 95 tries. 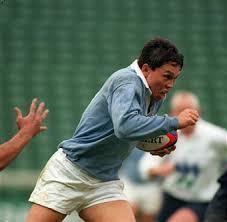 'One morning I was woken by the siren for an exercise at RAF Binbook, but when I reached my post one of the Directing Staff called me in and said "Sgt Rayner, you're dead!" While I was wondering what I'd done to deserve such an early demise he told me that I was playing for the RAF at Lydney that evening and that I was to pick up Off Cdt Underwood from Cranwell and take him with me. I've often wondered since whether or not they really wanted me as a stand-in, or just as Rory's taxi-driver.'

Rory's first Inter-Service game was against the Army on 26th March 1983, a 16-7 defeat, with his last being on 14th April 1999 against the Royal Navy at Gloucester, another defeat. He played in 32 Inter-Service matches, a tri-service record, missing just 2 games as he was on duty with England on both occasions. He has also scored a tri-service record 25 tries, 16 against the Royal Navy and 9 against the Army. During the 1990 game against the Royal Navy, he had just scored his 3rd try, in the first 10 minutes of the match, when a disgruntled Navy supporter, mimicking the Twickenham PA system, announced in stentorian tones: 'Flt Lt Underwood is to return to his unit - immediately!' Undeterred, Rory added a 4th try in the RAF's 30-23 victory. Some of his best games for the RAF were in the '91 and '94 seasons when he was selected at fullback, as the opposition never knew which line he would run, or where he would appear next. Both seasons were championship winning ones as the Royal Navy were defeated 22-13 then 22-12, with victories against the Army 30-14 and 28-22. After his final game in Light Blue he was presented with a special cap by HRH Princess Anne to mark his record number of appearances. He played for the Combined Services against every incoming international touring side between 1984 and 1993; this included Canada in Portsmouth on 1st October 1983, Australia at Aldershot on 27th October 1984, Australia, again at Aldershot, on 22th November 1988, the USSR on 13th December 1989 (again at Aldershot), Namibia at Portsmouth on 6th November 1990 and finally New Zealand in Plymouth on 30th November 1993, a narrow 12-3 defeat. His first match for England was on the right wing against Ireland at Twickenham on 18th February 1984, a 12-9 win with all the points coming from kicks. His last game for his country was on 16th March 1996 and also against Ireland at Twickenham; it was another victory, this time 28-15 and except for a single England try, yet again the boot ruled the roost. He made 85 appearances for his country, then a record, but since surpassed by Jason Leonard, Jonny Wilkinson and Dylan Hartley.

On 20th January 1990 at Twickenham and against Ireland, Rory scored his 19th try for his country and overtook the record set by the then Flt Lt Cyril Lowe, a WW1 fighter ace, on 10th February 1923 against Ireland at Leicester. By the time of his last international he had scored a total of 49 tries for his country and so the RAF have held the English rugby international try scoring record since 1921. In 1992 he switched to the left wing to accommodate his younger brother Tony. They were the first brothers to represent England at the same time since 1938. One of the greatest sights during the international against Scotland at Twickenham on 6th March 1993 was of their mother dancing on her seat after Tony had scored from a pass by Rory, who had also scored a try earlier in the match. He played in the Rugby World Cups in 1987, 1991 and 1995, before retiring from international rugby. Selected for the 1989 British & Irish Lions tour to Australia, he became the 610th Lion. 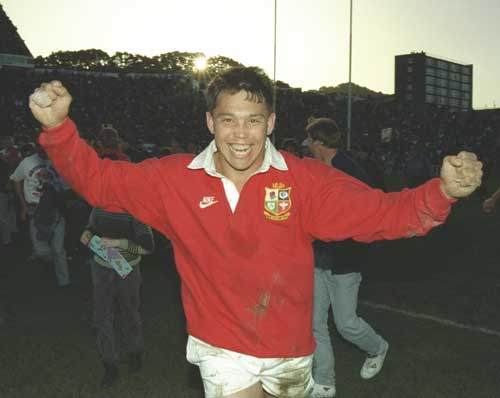 He played in all 3 Tests and the series was won 2-1. In 1993, in what was the last Lions tour of the amateur era, he and Tony were part of the squad that traveled to New Zealand. Rory again played in all 3 matches against the All Blacks, scoring a magnificent try in the 2nd Test when he ran in to score from 50 m. Still involved with rugby at Leicester, he is often at RAF Halton to watch the RAFRU's home Inter-Service games and meet playing colleagues with whom he shares so many memories. The RAF Rugby Union temporary exhibition is now open at the World Rugby Museum in Twickenham Stadium. For information on visiting, please see: www.worldrugbymuseum.com/visit

About the Author - Having spent his entire working career in the Royal Air Force, David Smith is now the RAF Rugby Union's historian and, at best, a mediocre but enthusiastic rugby player. Other entries in the series - Flying Lions: Bleddyn Llewellyn Williams