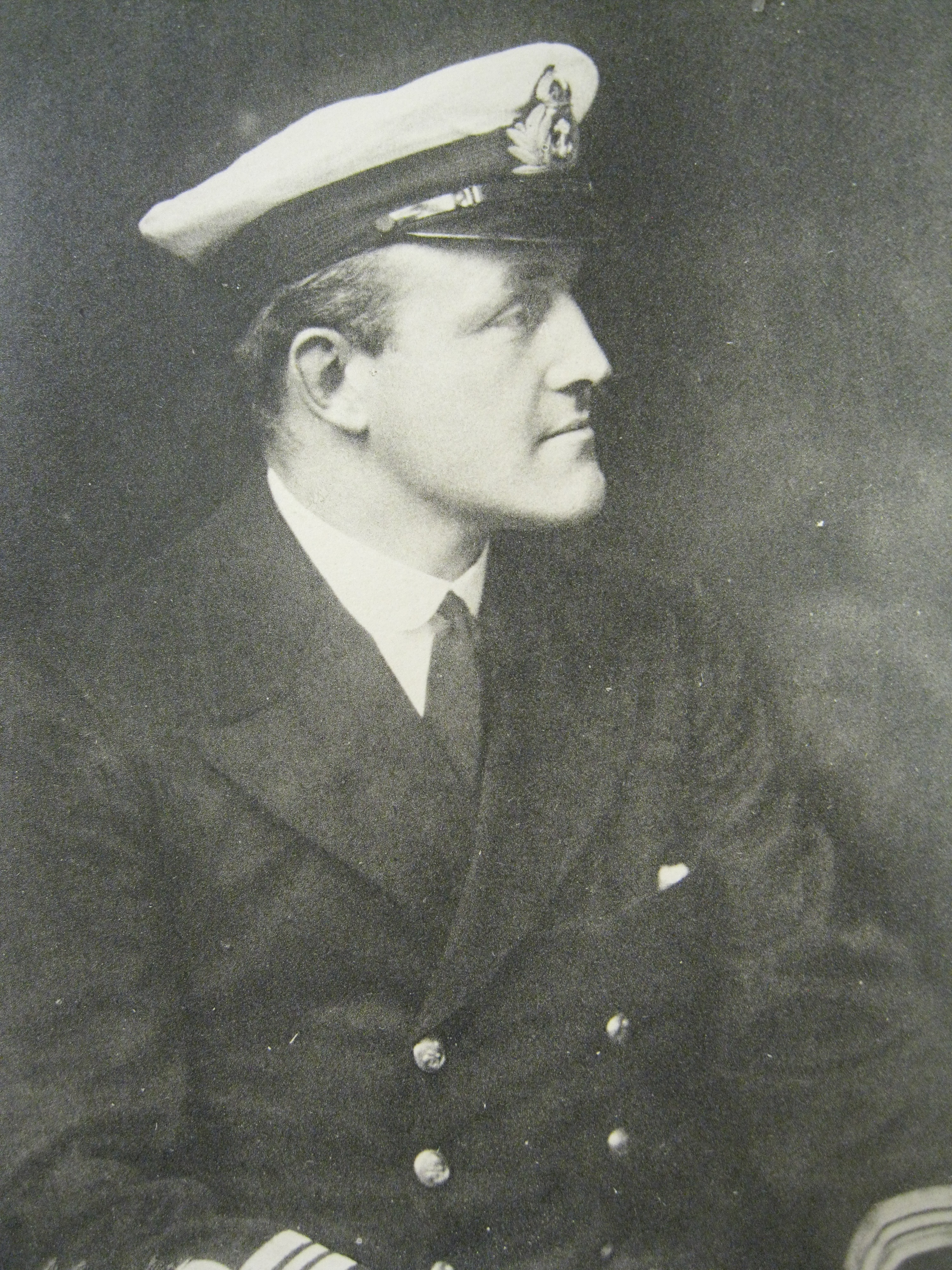 April 1918... The plan was as audacious as it was hopeful. Under the cover of smoke the HMS Vindictive and two former River Mersey ferries would approach the mole with a large company of marines. Once contact with the mole was established, the marines would quickly disembark; storm and secure the enemy gun emplacements. Whilst this was taking place submarines, packed with explosives, would detonate alongside the viaduct, destroying it and preventing enemy reinforcements from coming to the guns' assistance. Yet all of this was mere distraction. The real objective of the operation would take place in the harbour, where three obsolete Allied cruisers were to be scuttled in the mouth of the Bruges Canal, thus blocking it and preventing access to the seas for the German U-boats that had been waging unrestricted warfare on British and international shipping. At midnight on the 22nd April 1918 Lieutenant Commander Harrison was in position outside the bridge on board the HMS Vindictive, as it floated silently towards the Zeebrugge Mole shrouded in smoke. It would be his responsibility to lower one of several gangways onto the mole itself. The attack however did not go according to plan. Before Vindictive could arrive the wind changed direction, lifting the smoke-screen and alerting the Germans to their approach. Twelve large seaward guns, two anti-aircraft guns and a machine gun nest operated by around 1000 troops now awaited their arrival. At once Vindictive came under heavy fire and Harrison, who was in possibly the most exposed place imaginable, was hit in the face by a shell that severely wounded him and killed several others. Concussed, unconscious and with a shattered jaw he was dragged back inside. The severity of the enemy fire forced the Vindictive to land 300 metres further down the mole than originally planned. Any advance on the enemy would now require marines to cover the exposed parapet on foot and without gun support from Vindictive. The marines however were keenly aware that, in spite of these impossible difficulties, the success of the whole operation depended upon their diversionary attack taking place. 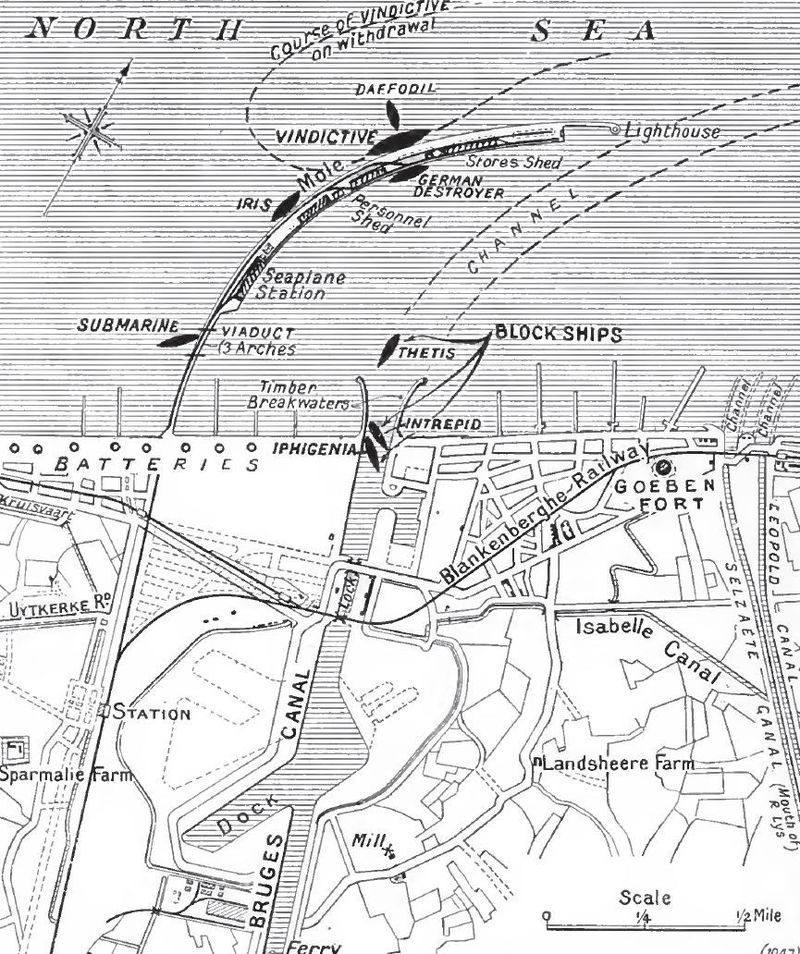 At 12.15 one of the Allied submarines succeeded in destroying the viaduct. By this time Harrison had regained consciousness and though clearly in need of urgent medical attention began mustering his men in readiness of an assault on the mole's machine guns. This was the moment for which the self-styled 'death or glory boys' had trained. With cries of 'storm the Mole!!' ringing in the air Lieutenant Commander Harrison and his men set off on an heroic charge along the parapet and into the face of the enemy guns. Of those that went with him all were killed, bar two who were captured. Shot through the neck, it is just possible that Harrison might have witnessed the black shapes of HMS Thetis, Intrepid and Iphigenia slip into the harbour and thus have known that his own part in the raid had been a success. Two of the three ships succeeded in scuttling themselves in the mouth of the canal. Consequently the Zeebrugge Raid was initially celebrated as a quite phenomenal success. Sadly it was a pyrrhic victory at best. U-boats resumed passage of the partially blocked canal just two days later. The heroism and gallant conduct of Harrison and his men however was not in doubt. Eight Victoria Crosses were awarded, one posthumously to Harrison whose actions were later recalled in the London Gazette:

'The silencing of the guns on the mole was of the first importance, and though in a position fully exposed to the enemy's machine gun fire Lt Cdr Harrison gathered his men together and led them to the attack. He was killed at the head of his men, all of whom were either killed or wounded. Lieut.-Commander Harrison, though already severely wounded and undoubtedly in great pain, displayed indomitable resolution and courage of the highest order in pressing his attack, knowing as he did that any delay in silencing the guns might jeopardise the main object of the expedition, i.e., the blocking of the Zeebrugge-Bruges Canal.'

Edward Hylton-Young, a gunner, who returned on the Vindictive described Harrison as a 'quiet tower of confidence and security'. He had played his part well and is the only English international rugby player to have been awarded the Victoria Cross.

Arthur Harrison the player Arthur Leyland Harrison was born in Torquay in 1886. He attended Brockhurst Prep School in Shropshire and Dover College before enrolling with the Britannia Royal Naval College in 1901. A vigorous scrummager with huge strength and a tenacious work rate Harrison worked his way through the ranks, playing for the Naval College, Navy and United Services, as well as turning out for Rosslyn Park. He was called up for international duty for the first time in 1914. Selected to play against Ireland at Twickenham he lined up in a front-row that included himself, Alfred Maynard and Dreadnought Harrison. Elsewhere in the side were Cyril Lowe, Fred Chapman, Ronnie Poulton, Dave Davies, Francis Oakeley and Sid Smart. Harrison was singled out in the press for having done 'three men's work in the scrum' and his play was said to be 'reminiscent of Slocock, Wodehouse, Daniell or Milton'. He was selected again for the final game of the 1914 season and the last before the outbreak of war. Against France at the Stade Colombes England ran out 39-13 winners with a side bolstered by Mud Dingle and Henry Watson. Once again Harrison was influential and helped his team to a Grand Slam. Harrison's final resting place in unknown. He is remembered at Roehampton, St Mary's Church in Wimbledon, Rosslyn Park FC, Dover College, Brockhurst School and Roundham Head, Paignton.