Elfed Lewis Jones was born in Llanelli on 29th April 1912. After leaving school he became a Magistrate's Clerk. While at school he played on the wing for Llanelli Harlequins; he later joined Llanelli and he was the club's top try scorer for a number of seasons. He played against New Zealand on 22nd October 1935, a game the tourists won 16-8. Jones captained the side during the 1936-37 season and led the team to one of their most successful seasons when they scored a record 699 points. He showed his commitment to Llanelli and the amateur game by refusing three approaches to join the professional Northern League, all offers rumoured to have involved a signing-on fee of £400. In 1938, despite not being selected for his national team, he was chosen to tour South Africa as a part of the British Isles team and thus became the 315th Lion. Although he only played in 12 of the 24 matches on the tour, Jones finished as the team's highest try scorer with 10, including his team's first try in the third and final Test of the series. Twice on the tour he scored a hat-trick of tries, against South Western Districts and then Rhodesia. 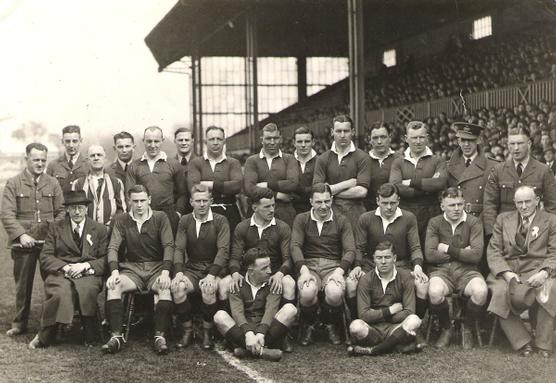 Elfed Jones is 9th from the left in the back row. The match, the RAF's first during WWII, was arranged at short notice and played at Swansea after the city had been badly bombed. The gate raised £795 for the Mayor's Air-Raid Disaster Fund. During the 1938-39 season, Jones was selected for his one and only international cap. He was one of three different wings chosen opposite Sydney Williams during the Championship and despite being a member of the side that beat Scotland 11-3, Jones was himself replaced for the final match against Ireland. The 1939-40 season would be Jones' last before the outbreak of the Second World War. Only one game was played before the WRU declared the cessation of competitive rugby, and that was against Felinfoel; Jones was Llanelli captain for the match. Jones ended his career with Llanelli as one of their highest try scorers, with a career total of 129, one of the few players to have scored over a hundred tries for the club. After the outbreak of the Second World War Jones joined the RAF and rose to the rank of squadron leader; he received the Belgium MC and was later awarded the MBE. After the war, Jones continued his connection with Llanelli by becoming Chairman from 1960 through to 1967 and then serving as club President from 1978 to 1981. It was in his role as Chairman, when in 1964 at the Annual General Meeting of the Welsh Rugby Union, that Jones made a key speech where he attacked both the WRU and Welsh clubs for neglecting coaching; instead 'concentrating too much on physical fitness and neglected basic skills and tactics'. He went on to claim that Welsh rugby 'at international and club level had deteriorated and even international players lack the ability to handle the ball accurately'. Jones pleaded for the Welsh Coaching Committee to be reconstituted and that the WRU should consider appointing an official Rugby Coach with several assistants, lest the AGM of the WRU 'degenerate into a meeting of social, instead of rugby, clubs'. A war time enlistment, he was never capped by the RAF. Elfed Jones died in Llanelli on 5th October 1989. The RAF Rugby Union temporary exhibition is now open at the World Rugby Museum in Twickenham Stadium. For information on visiting, please see: www.worldrugbymuseum.com/visit