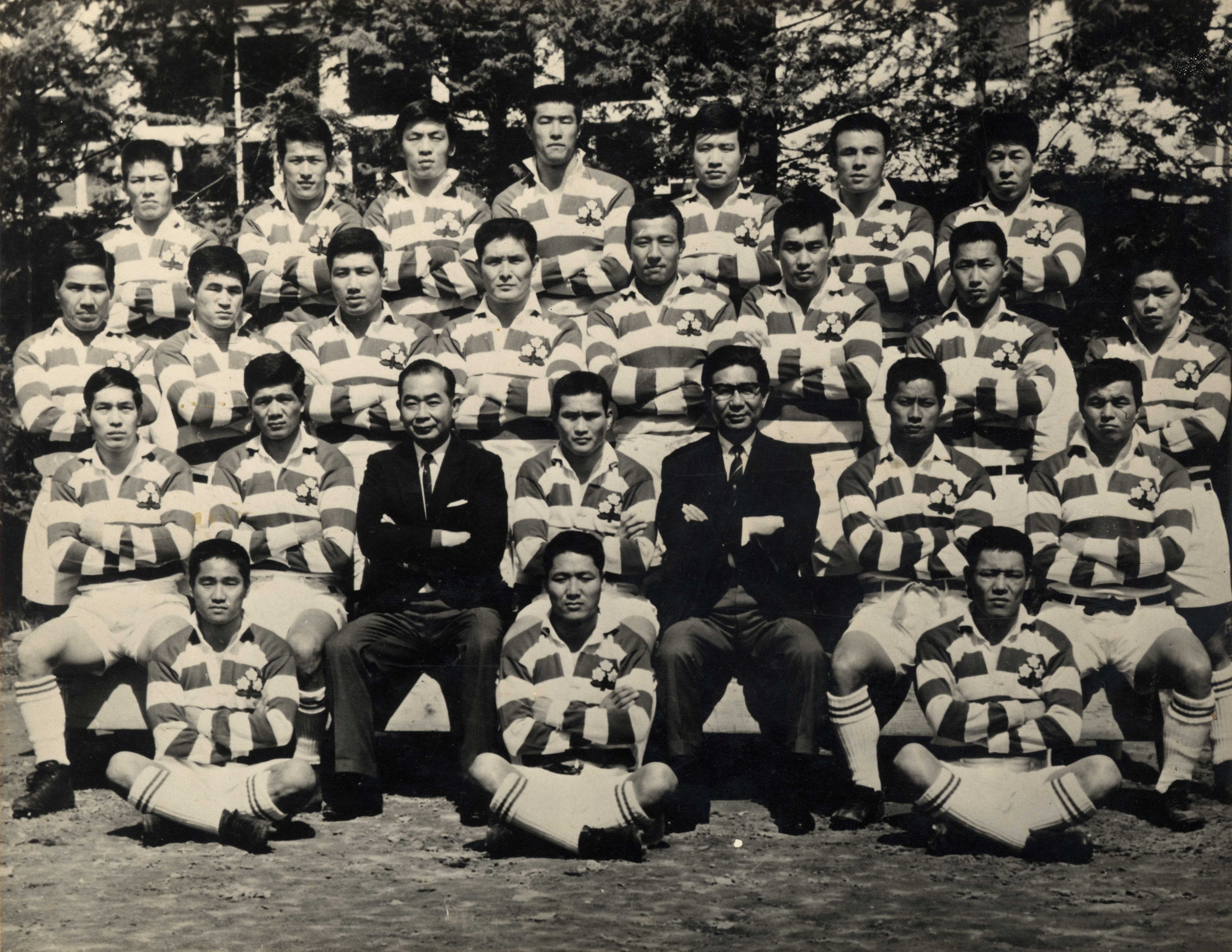 In 1968 Japan shocked the rugby world by defeating the Junior All-Blacks in Wellington. Japanese Wing Yoshihiro 'Demi' Sakata scored four of Japan's six tries that day and would go on to demonstrate that the performance was no fluke. This is his story. Born in Kyoto in 1942, Sakata attended Rakuhoku High School then Doshisha University, where he developed as a fast, intelligent wing that specialised in finding gaps and finishing off moves. On completion of his studies he found work with Kinki Railways Co., Ltd. and joined the Kintetsu Liners, with whom he won the All-Japan Championship in 1967 and 1968. In 1968 he was selected by Japan coach Tetsunosuke Onishi to tour New Zealand with the Brave Blossoms. Onishi was an innovative coach and knew that his side could not compete physically with the All-Black forwards. Instead he developed a style of play that would capitalise on the strengths at his disposal. With an average height of 175cm the Japan team would waste little time with the set piece and even adopted two man line-outs. They would pioneer a style of running rugby, catch-pass and angles that emphasised speed and fast attacking. Sakata would be key to this style. 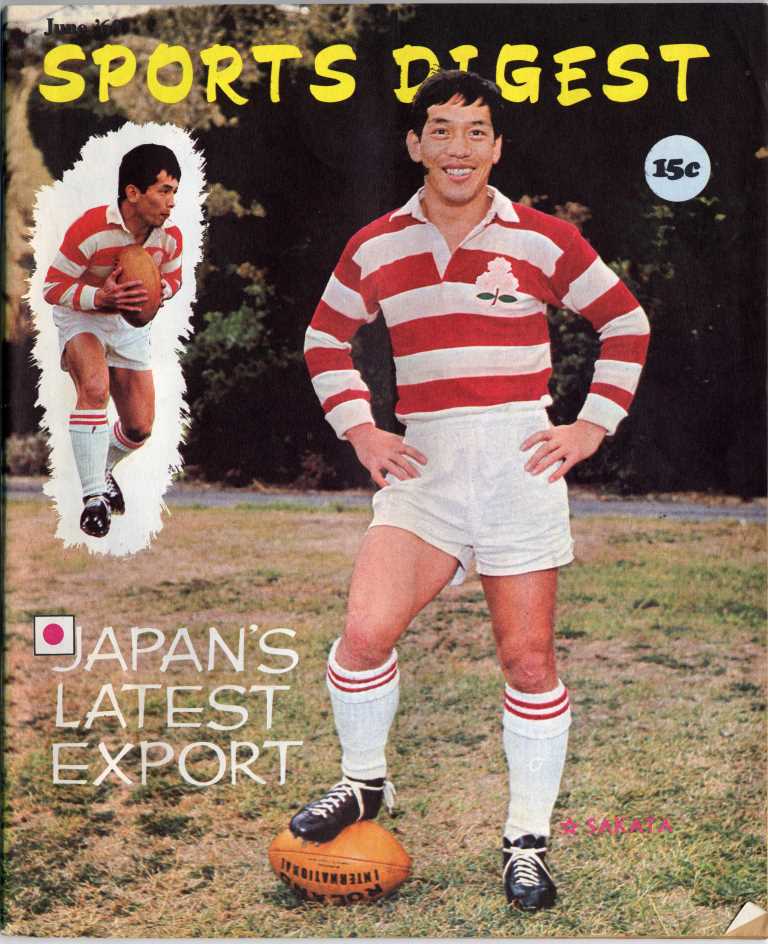 Along with his four tries against the Junior All Blacks, Sakata had scored five against Bay of Plenty and ended the tour with 12 tries in 10 matches. At the end of the season in New Zealand he was voted one of five players of the year, along with Jo Maso, Sid Going, Walter Spanghero and Baker Cottrell. Now firmly on the world rugby map Sakata accepted an invitation the following year to return to New Zealand and see if he could break into the formidable Canterbury team of Fergus McCormick, Ian Kirkpatrick and Alister Hopkinson. For 27 year old Sakata, who didn't speak English, this was quite an adventure. In those pre-internet days he was effectively severing all ties with his family and homeland for the duration of his stay. On arrival he introduced himself as 'Deme', which means 'eyes wide open'. Noting that he was comparatively small his team-mates promptly named him 'Demi' and the nickname stuck. Out of necessity he threw himself into New Zealand life, helping out at his host-father's printing firm and developing a fondness for New Zealand lamb chops, a food that he could never have eaten at home. 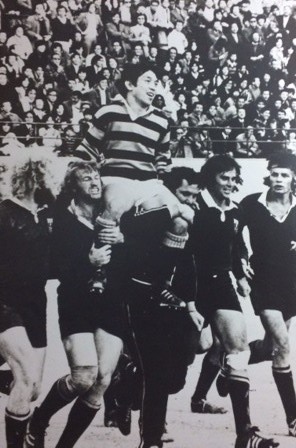 After a couple of months he began to feel more settled and an injury to the regular Canterbury Wing opened up a chance on the field. He seized it with both hands, scoring two tries in the second half and gaining a starting spot in the team the following week. His spell with Canterbury lasted for 6 months and included games with New Zealand Universities and the New Zealand Barbarians. A full cap with the All Blacks may have come later but instead Sakata had international obligations with the Brave Blossoms. 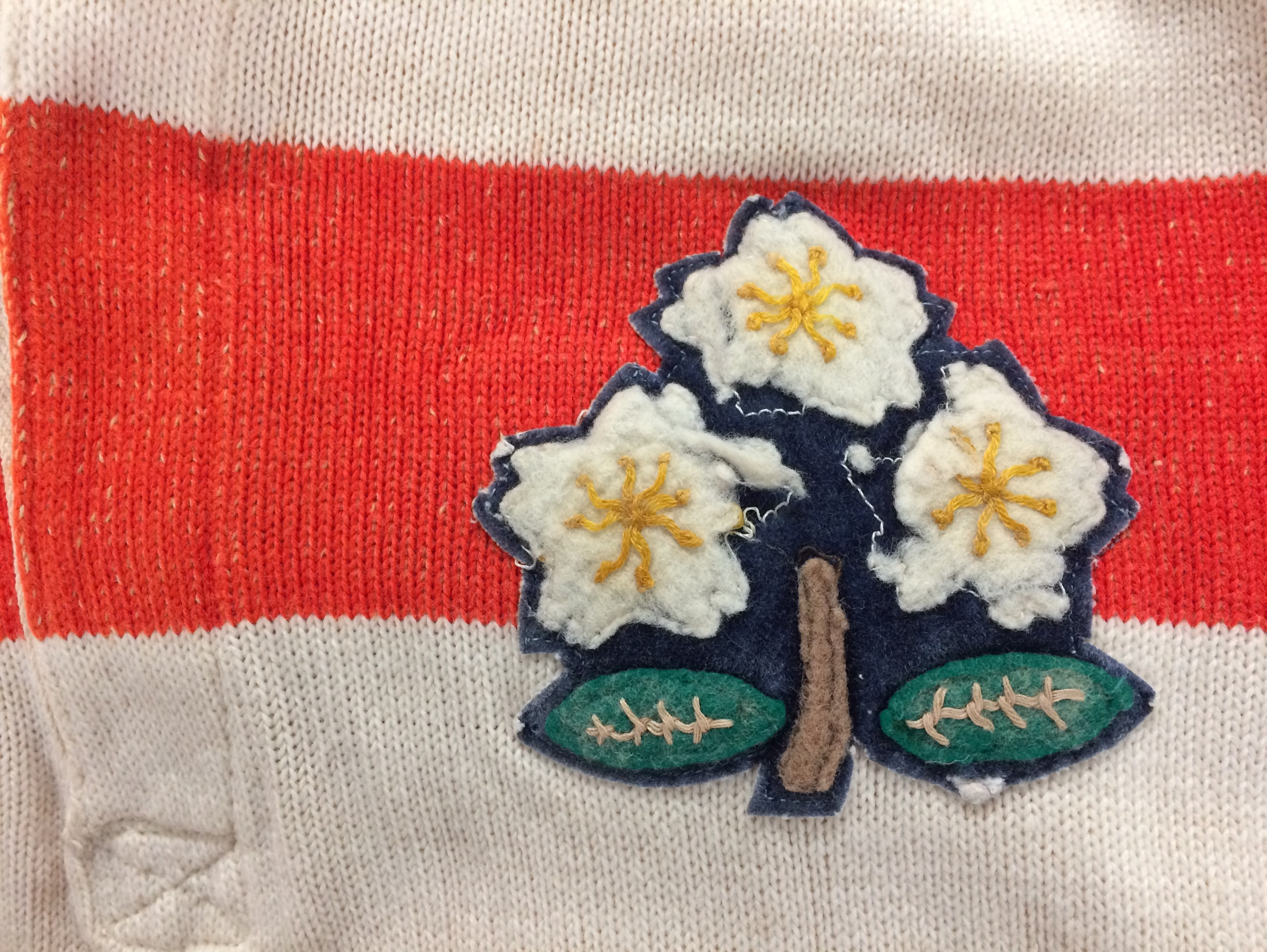 During the 1930s the Japan national team emblem had three cherry blossom buds, two of which were open, one of which was shut. Sakata recalls that it was planned that the third blossom would open when the team played England for the first time. As the fixture proved elusive the third blossom was finally opened in 1952 when Japan played Oxford University in front of Prince Chichibu in Osaka. A strong England XV, featuring the likes of Fran Cotton, Roger Uttley and Tony Neary, visited Japan for the first time in 1971. Japan, now under the captaincy of Akira Yokoi, with Demi Sakata and Tadayuki Ito on the wings, gave England the fright of their lives in Osaka, leading deep into the second half before an England try in the 78th minute pushed the visitors into the lead. The second game at the Price Chichibu Memorial Ground in Tokyo was even closer with only three points separating the sides at the final whistle. Japan and Sakata would finally make the long awaited pilgrimage to Twickenham in 1973 when Japan took on an England under 23 side at the English national stadium. Demi remembers being taken aback by the width of the pitch. Earlier in the tour he had side-stepped David Duckham, leaving him sprawling in a match against Midland Counties. This time it was not to be though as a strong England pack that included Phil Blakeway and Mike Rafter, controlled possession and did their best to keep the lively Japanese backs out of the game. A close first half ended 8-6 to the home team before England eventually ran out 19-10 winners. After a 16 year career Demi played his final game for Kintetsu in 1975, helping them to secure the All-Japan Championship for the third time in his career. He would come out of retirement just once more to face his old team Canterbury. 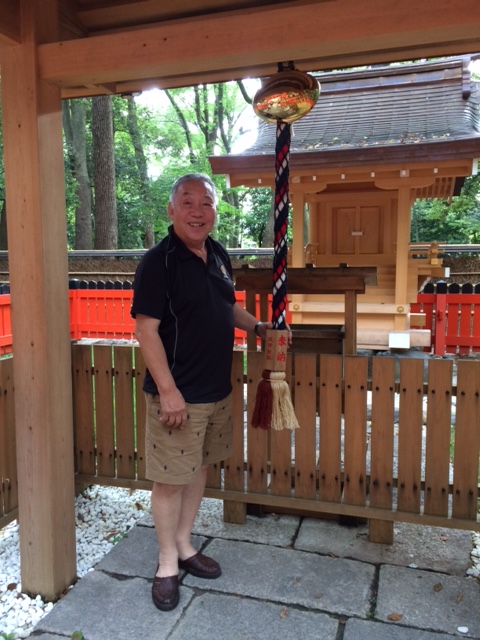 Demi at the Shimogamo 'Rugby' Shrine in Kyoto, 2018

The World Rugby Museum is grateful to Demi Sakata for this interview. His 1968 Japan jersey was displayed in the museum as part of the 'Brave Blossoms: History of Rugby in Japan' special exhibition from November 2018 - August 2019.