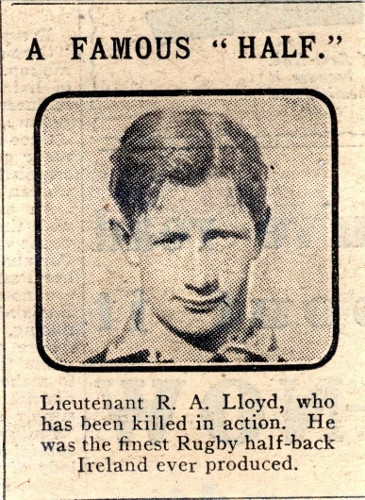 There were a handful of rugby players who played international rugby both sides of the 1st World War. Perhaps the most fortunate was the Irish fly half Dicky Lloyd who, having won 16 caps and established a huge reputation as one of the finest players of his day, joined up in 1914 and served in the 10th Battalion, King's (Liverpool Regiment) throughout the war. He was so severely wounded in the second Battle of Ypres that it was erroneously announced in the papers on 10 May 1915 that he was missing, presumed dead. However, unlike so many of his less fortunate soldier rugby players, he survived to play a further season of international rugby in 1920 and become a respected referee, coach and broadcaster. Richard Averill Lloyd was born in Tamnamore, Co Tyrone on 4 August 1891. He was a pupil at Armagh Royal School and Portora Royal School where he gained a reputation as an outstanding rugby player and cricketer. He was the star of a brilliant school rugby side which produced seven future Irish internationals and provided Ulster Schools with their entire back line. From 1909 he studied at Dublin University from where he made his debut for Ireland against England alongside his university scrum half partner Harry Read in February 1910. Dickie Lloyd and Harry Read were the first Irish half back pairing where each player took a specific role and they played together for Ireland on 13 occasions between 1910 and 1913.

A sporting all-rounder and an outstanding opening bat, Lloyd also played cricket twice for Ireland against Scotland in 1911 and South Africa in 1912. By the beginning of the war, Dickie Lloyd had won 16 rugby caps, captained Ireland nine times, and become Ireland's leading points scorer with 63 points including a then world record 6 drop goals. He had moved to Liverpool in 1912 to work as a cotton broker with the firm Cunningham and Hinshaw. He then played for Liverpool FC up until the war in a side that during the 1913-14 season uniquely contained three international captains - Dickie Lloyd of Ireland, Ronnie Poulton of England and Fred (FH) Turner of Scotland. The future England international Wavell Wakefield was a boy at Sedbergh School when Liverpool came with their three international captains to play the school in the autumn of 1913. He was the touch-judge at that match and wrote that "Lloyd's kicking was wonderful. From right down by their twenty-five, he would pick it up and from the touch line screw-kick it down so that it fell into touch just by our twenty-five." After the war, he was appointed captain of Liverpool in 1919 and resumed his international career as Ireland's captain against England in February 1920. He also captained Ireland for the 11th time in his 19th and final international against France in April of that year ending with an Irish points record of 75 points from 2 tries, 16 conversions, 3 penalty goals and 7 drop goals. He retired as a player at the end of the 1920-21 season but became a referee and refereed two internationals during the 1922 Five Nations Rugby Championship. After his rugby career ended, he played cricket for Liverpool and three times for Lancashire during the 1921 and 1922 seasons, including a match against the formidable 1921 Australian touring side. He died in the Royal Victoria Hospital Belfast on 23 December 1950. Sources: