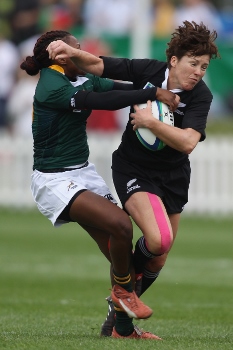 The Black Ferns fly half, Anna Richards, is the most decorated player in the history of international rugby. With a total of 49 caps under her belt, Richards is the most capped Black Fern to date, and has lead her nation to four back-to-back World Cup victories out of the five she has competed in - no other player, male nor female, can compare.

Born in 1964, Anna was raised in a family of four girls. Her parents encouraged all of their daughters to pursue their sporting ambitions and all four of them become successful athletes, with her younger sister following her into the Black Ferns. However Anna didn't pick up a rugby ball until the age of 21 when she started playing for the university side in Christchurch. Previously, she had been a talented tennis player and netballer, playing at national level for Canterbury, before being dropped and asked by the university coach to try rugby. Richards describes having fallen in love with the sport instantaneously and "found out right away that [she] was way better at rugby than [she] was at netball".

Anna went on to earn her place in the first ever New Zealand women's squad in 1989 and was still playing at the highest level twenty-one years later at the age of 45, when she helped defeat England in the final of the 2010 Women's Rugby World Cup, claiming her fourth victory. Between 1991 and 2001 she was integral to a side that went on a twenty-seven game winning run. Anna's win/loss ratio is near impossible to match. In over 100 international appearances, including rugby sevens, she has only ever lost twice. However, she insists that her talent doesn't come naturally and that she always had to work hard to retain her place in the squad, "It's easier to make a team than stay on a team. I always made sure I was the fittest; I was always working on my core skills and every year I'd pick something I wanted to work on." 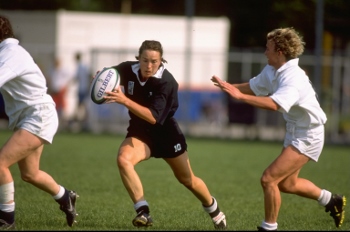 She has won four World Cups (in 1998, 2002, 2006 and 2010), starting and playing all 80 minutes of all four finals; won nine New Zealand Provincial Championships from 1999 to 2005 and then again in 2007 and 2008; won four Canada Cups in 1996, 2002 and 2005; won the English League and Cup in 1995, playing for Richmond; won the 1994 inaugural Australian Championship, as part of a guest side from Christchurch; won the 1999 Tri Nations; and was a member of the 2004 Churchill Cup-winning side. She has also represented New Zealand in Sevens, captaining them undefeated in 2000 and 2001 and winning the Hong Kong International Sevens and Japan Sevens Cup in both years; as well as the 2001 Wellington International Sevens. To add to her achievements, Richards also competed internationally in Touch Rugby. She has represented New Zealand in the Open Mixed Grade in 1990-91 and was Open Women's captain in 1997-98, as well as playing for the over 27s. She played in the 1991 World Cup and was a runner up in the Open Mixed category. 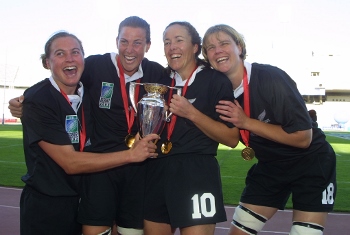 Her playing career finally ended in 2014 when she left New Zealand to begin her role as the newly appointed elite women's sevens coach at the Hong Kong Sports Institute, in preparation for the 2016 Olympics in Rio, where she continues to share her knowledge, expertise, and, most importantly, her love of the game with the next generation of players. She was inducted into the IRB (now World Rugby) Hall of Fame on 17th November 2014 for her remarkable contribution to New Zealand rugby. Black Ferns coach (1996-2002) Darryl Suasua, explains how, "Anna has fought tooth and nail over the years for women's rugby to be recognised, and has been a pioneer [for the sport]". Suasua also claims that Richards, "may be remembered as the first lady of New Zealand women's rugby" after her retirement. Anna's services to women's rugby were honoured in 2005 when she was awarded Membership of the New Zealand Order of Merit, or, what she likes to call, her Q.N.B.F. - the Queen's New Best Friend.

About the Author - Cat McNaney, 19, is studying History at the University of Exeter and plays rugby for Bristol Ladies and the Women's England U20s. She undertook a placement week with the World Rugby Museum as part of a Public History module in 2016.