In 1888 a British touring team was sent to the antipodean colonies to play rugby; an event that subsequently became a key moment in rugby history, setting a precedent for years to come and beginning one of the great traditions of the sport. Dubbed the Anglo-Australian tour, the tour is now accepted as the first in the line of British and Irish Lions tours that have gone on to supply so many of rugby's most enduring memories. The World Rugby Museum is home to a number of items from this tour, including the jersey worn by A.P. 'Alf' Penketh. Of the 54 matches contested against New Zealand and Australia on this tour, Penketh would would play 19 and would even score a try against Canterbury on the 9th May 1888. Born in 1865, Alf Penketh was a native of the Isle of Man. A seasoned forward, he played for and captained the Douglas Rugby Club before being called upon to represent the British Isles team. Penketh's story is unique as he is the sole Manxman to to play rugby for the British and Irish Lions to this day. Alf Penketh's jersey, along with the 1888 Anglo-Australian tour cap and medal.

But just how did this 6 foot tall lad from the Isle of Man end up on board the SS Kaikoura from Gravesend to New Zealand in the spring of 1888? On the 9th of November 1887, a gentleman named Arthur Shrewsbury sent a message from Sydney, Australia, to England that simply read, 'affix'. The recipient was his business partner, Alfred Shaw, who had now been given the green light to start recruiting men for an international rugby tour to Australia and New Zealand. A talented batsman, Shrewsbury was visiting and partly financing a cricketing tour to Australia at the time. After four such tours he was rumoured to have been struggling financially, and looked to rugby football to bring his bank account back from the brink. This was not an official rugby venture - the RFU Committee unanimously opposed the tour; however, they did not seek to actively oppose prospective players from joining it. The Committee made a point of reminding players of the rules against professionalism, and indeed followed through with punishing players for accepting payment or gifts whilst on tour, as Halifax forward Jack Clowes soon found out. On the eve of departure, Clowes would be disqualified from playing by the RFU for admitting to receiving £15 for tour kit. Whilst continuing on the tour, Clowes refused to play a single game so as to avoid tarnishing the reputation of his team-mates. The 1888 Football Annual described the 22 man squad (21 when Clowes is taken off playing duties, then down to 20 when captain Bob Seddon drowned whilst sculling half way through the tour) as 'a fairly good lot…though by no means representative of English football'. Assembled by agent Henry Turner, many of the players were not seasoned internationals, with only 3 out of the 22 being regular internationals. They were, however, representative of British Isles rugby with players from all four home nations. The team included four Scots, one Welshman, an Irishman, and not to forget Penketh, representing the Isle of Man. These men were considered rugby 'missionaries' of sorts, spreading their passion for the game through the southern hemisphere. 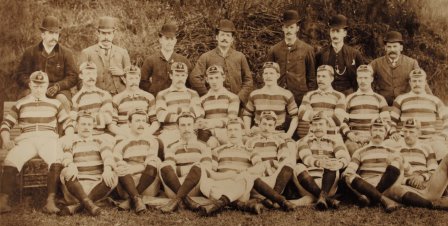 The British team that toured Australia and New Zealand in 1888.

Thirty-five games of rugby were played between April-October 1888 and, in a move that would unthinkable today, the team were also asked to play several Australian rules football matches. As this was a privately funded tour with no patronage from the RFU, the British team were able to play 19 games of the local code in all, even winning 5 of the matches. The tourists would have been the first to admit that they did not take to the southern sport well, but these games were less about the sport and more about assisting with the cash flow for the promoters. This was especially necessary during periods of the tour in southern areas of Australia where rugby wasn't well-known or followed. The British Isles team played 54 matches between the two codes over 23 weeks. Whilst the Australians had the upper hand at their local version of football, only two rugby games were lost and six drawn out of the 35 rugby union games played. 19 of these rugby games were played against side from New Zealand and 16 against sides from Australia. The success of this first international tour started a tradition that continues to this day. The British and Irish Lions have embarked on 32 international tours to the Southern Hemisphere and 2017 sees the Lions take the journey south again, travelling this time solely to New Zealand for 10 games in June and July.