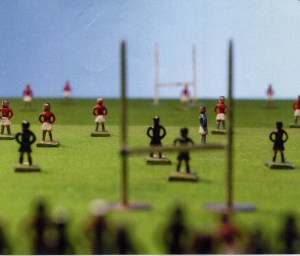 A Lions tour involves vast amounts of preparation and a numerous tactical discussions. Ahead of this year's tour in New Zealand, let's take a look at how things were done nearly seventy years ago. This tactics board (pictured above) was handmade by HMS Fisgard Artificer Apprentices in 1950 and was used on the 1950 British and Irish Lions tour to New Zealand and Australia. The remarkably detailed set includes fifteen miniature Lions and fifteen miniature All Blacks, as well as posts, corner flags and even a referee. The board would have been used to develop tactics on the long voyage by sea to Australia and New Zealand. Although as you can see from the photos below, the touring party found other ways to occupy themselves as well!

It is not quite clear why the apprentices made the board, although there are several ways in which its production may have been instigated. Lewis Jones, one of the 1950 Lions was based at HMS Fisgard and Malcolm Thomas (another Lion) was based nearby at HMS Raleigh. Captain Morrell was in charge at Fisgard and was a keen rugby man who had played for the Navy rugby team. The HMS Fisgard Artificer Apprentices presented the board to the RFU after the tour. The donation was probably instigated the Surgeon Captain 'Ginger' Osborne, manager of the 1950 Tour, whose collected papers of the tour are part of the World Rugby Museum's collection.