3 years ago we posted a response to an article published on Americas Rugby News in which Richard Steele examined the history of Scottish selections and whether the trend of international teams selecting foreign born players really is as modern as is widely assumed. This time, John Jenkins takes a look at some other rugby nations...

In March 1991 the Welsh Rugby Union announced the introduction of a six year residential qualification for non-Welsh players who wished to play international rugby for Wales. 'Wales has always been a leading rugby nation through the excellence of Welshmen', Denis Evans, the then secretary of the WRU announced. 'We have never had to rely upon other nations and we do not intend to start now'. But is this true? From the very beginning every international side has included 'foreign-born' players. It has never been true of Wales. Although London Welsh had sniffed at outsiders, English international half-back, Neil Bennett (1975-1979), 'qualified' for London Welsh after playing in one game for the Colwyn Bay second XV. This had been arranged by Mike Roberts, the former London Welsh, Wales and British Isles forward (1971-1975), a native of Colwyn Bay. 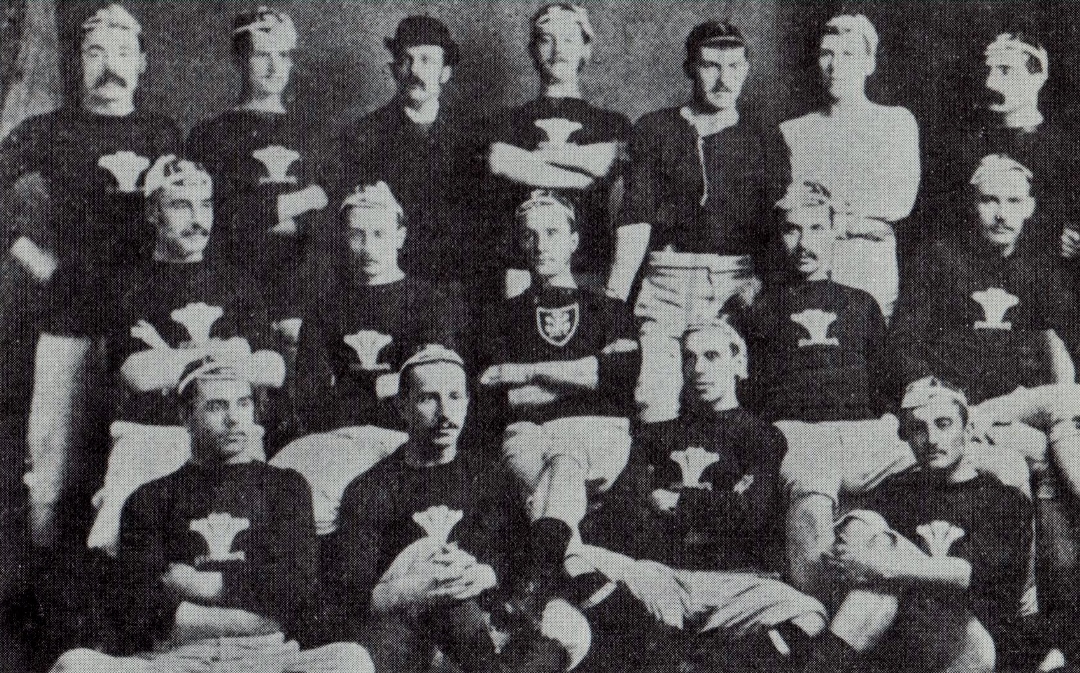 1881 Wales team. Seven of the team were born outside of Wales.

At least 87% of the 1151 players capped for Wales since 1881 have been Welsh-born. Every rugby international side contains a sprinkling of players who are not born in the country they play for. Many qualify through a parent or grandparent; others are eligible once they satisfy the residency regulations, currently reduced to three years and to be increased to five years in 2020, while another group appear to be so borderline that it is difficult to understand how they pass muster. Huw Richards has written on the complex, contentious nature of ethnicity. Many players, though clear which side of the line they stand on, have strong links to the other side. He cites as one example, "...in 1993 when Rupert Henry St John Barker Moon was playing scrum-half for Wales while his opposite number [playing for England] was Dewi Morris who observed that this would have attracted a little less attention had he [Dewi] used his first name, Colin, instead." From February 1881 to January 1886 Wales played its first ten international games, capping sixty-one players. Of these, sixteen were born in England, two in Ireland, one in India, one at sea, off the Cape of Good Hope and one, the first ever Welsh captain, James Bevan, in Australia. In Wales's fourth match, which was against Scotland at Raeburn Place, Edinburgh, in January 1883, John Griffin who was reading medicine at Edinburgh University, an Englishman born in Southampton and educated at Epsom College, was drafted into the Welsh side as a late substitute. This was his only international appearance. The height of his previous rugby career had been for his University and captain of the University third XV. In June 1890 Griffin became the visiting medical officer to the Provincial Hospital in Port Elizabeth, South Africa. Over a year later, on 30 July 1891, he refereed the first ever international match in the country, between South Africa and the British Isles. He became vice president of the Western Province Rugby Union. Griffin appears to have had no Welsh connection whatsoever. In Wales's seventh match, against Ireland at Cardiff in April 1884, Joe Simpson, born in Durham, became Wales's third captain, the first non-Oxbridge educated player to be so honoured. He had come to Cardiff at the age of fourteen when his father was appointed Assistant Manager of the "Western Mail". It is interesting to note that Ireland had arrived in Cardiff two players short and borrowed two local players. In the late nineteenth century Welsh rugby had benefited from migration from the depressed areas of the West of England to a dynamic, rapidly-growing South Wales. In 1901, twenty years since the founding of the WFU, the population of Glamorgan still included a third who had been born outside the county. The Welsh side during 1891 - 1907 included the following formidable forwards, all of whom were born in England: Alfred Brice (18 caps); Dick Hellings (9 caps); Harry Packer (7 caps); Wallace Watts (12 caps). They were followed by: Frank Hawkins (2 caps); Juan/John Morgan (2 caps) born in Argentina and Phil Waller (6 caps). 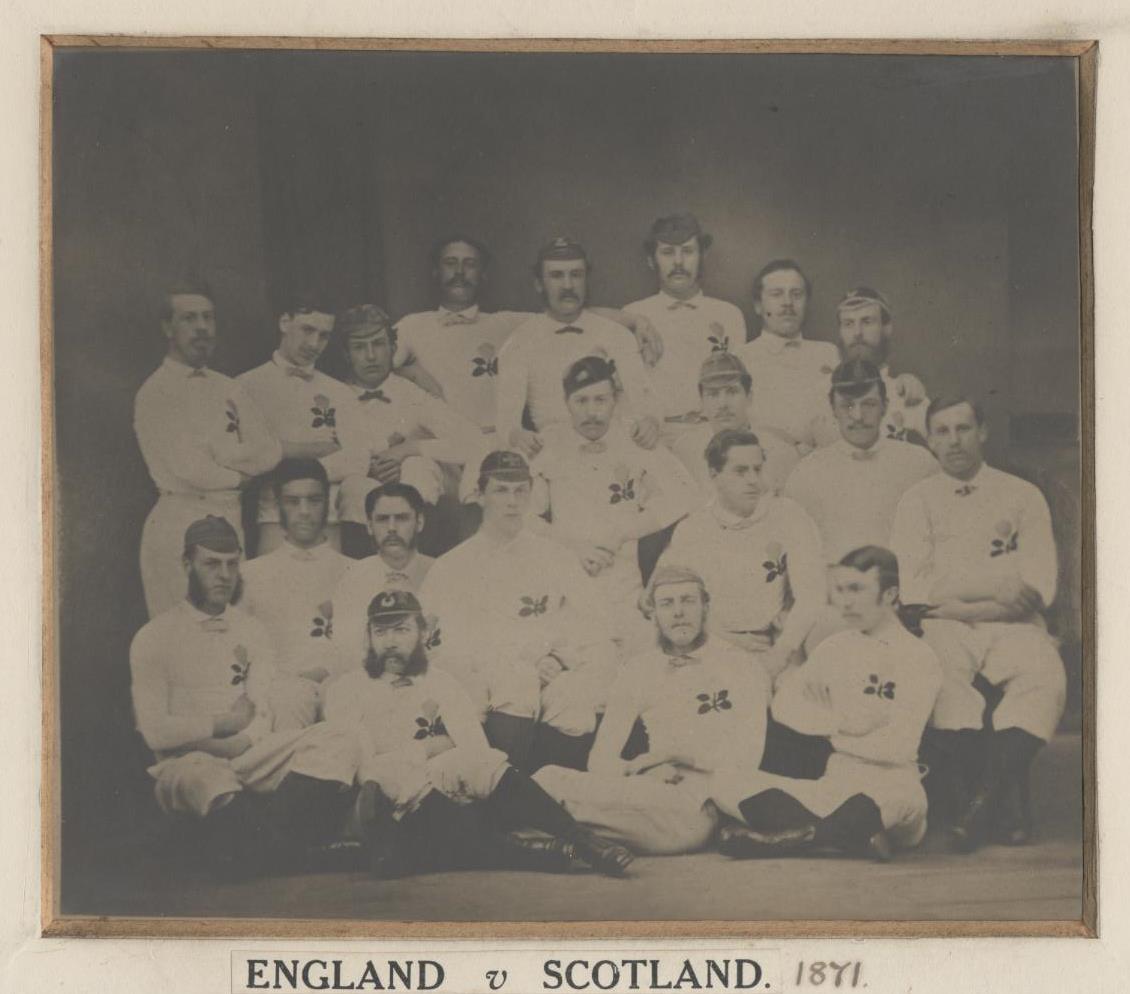 A brief survey of the growth of the fledgling game produces the following example: In England's first two matches, both against Scotland, three players were born in India, one in Scotland and one in Ireland. Scotland capped nine players born outside Scotland. They ranged from the Cocos Islands to Jamaica, India and England. During the same period the Ireland XX in their two matches capped two players born in England and one born in India. Since 1871, England have capped players born in at least twenty five countries. Of New Zealand's first representative team, comprising players from Auckland, Canterbury, Otago and Wellington, six of those playing against a Wellington XV, at Wellington on 22nd May 1884, were born overseas: one in Calcutta; one in Liverpool; two in Ireland, and two in London. Two of these players went on to play for New South Wales. One of these, Thomas Ryan, born in London in 1864, scored the first points for New Zealand, a drop goal whacked over some ten minutes into the game. He also contributed a conversion. In Australia, Queensland played a series of matches against New South Wales. Frederick Charles Lea, born in Lutterworth, Leicestershire in 1855, played for Leicestershire before emigrating to Australia in 1875. He played for Queensland, before becoming the sole selector of interstate matches and a referee. Hubert Rowland Pasley Durham, born December 1854 in Llanddewi Aberarth in West Wales, attended Radley College and the Royal Agricultural College, Cirencester, and a brief spell serving, like his father, in the Cardigan Militia and the 1st Royal Lancashire (The Duke of Lancaster's Own), emigrated to Australia in 1883. From 1884 to 1888 he represented and captained Queensland, became their Treasurer before retiring from the game. He was a Captain in the 4 Queensland (Imperial Bushmen) in the Boer War, was injured and spent a few months recuperating in London before returning to Australia. Australia played their first international match v Great Britain on 24 June 1899. Bob McCowan who played for the hosts, was born in Renfrewshire in 1875 and had played for Moseley and Midland Counties. In May 1898 he emigrated to Australia. Also appearing for Australia was New Zealand-born Peter Ward. Another Moseley player, Guy Evers , packed down for Great Britain. In the second match between the two countries, played on 22 July 1899, McCowan was joined by Robert Challoner, born in Stratford-upon-Avon in 1872 and three players born in New Zealand. 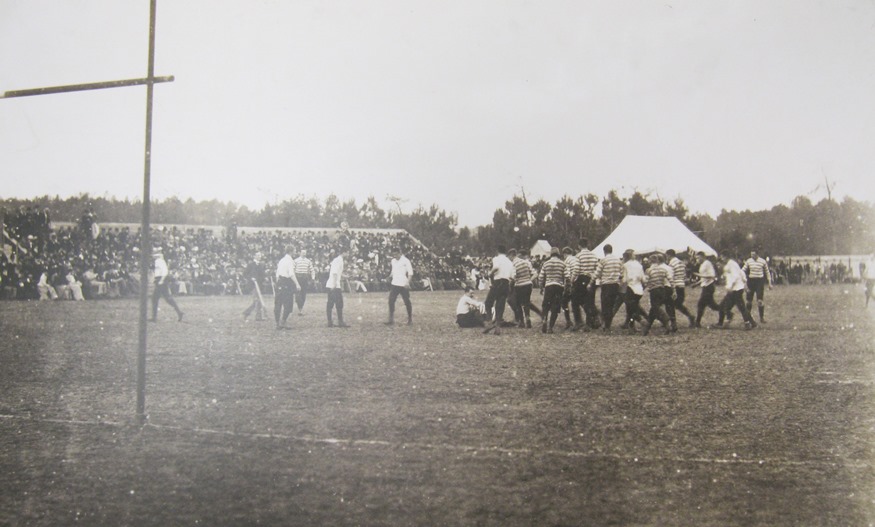 In South Africa, the team played ten international games (three in 1891, four in 1896 and three in 1903). Of the ninety players capped, twenty were born outside the country: nine in England; four in Scotland; two in Ireland; one in Wales; one in Australia; one in Canada; one in the Netherlands, and one in Botswana. When South Africa played against Great Britain on 26 August 1903, both captains, Alex Frew for South Africa, and Mark Morrison for Great Britain, had played together for Scotland against Wales, Ireland and England in 1901. W P Donaldson, the referee, was also a Scotsman. From the very beginning then, every international side has included 'foreign-born' players.

About the Author - John Jenkins is a retired librarian and the compiler of "A Rugby Compendium: an Authoritative Guide to the Literature of Rugby Union", 1998, and co-author of the "Who's Who of Welsh International Rugby Players", 1991 and 2018.