After Ireland's unexpected Triple Crown in 1894, the International Championship opened in January 1895 with England facing a very strong Welsh side at St Helen's, Swansea. Influenced by the huge 36-0 victory by the South over the North at Blackheath in December 1894, the English selectors chose no less than 10 new caps for the encounter of whom nine including five new forwards had appeared for the South. They also selected the South captain, the highly experienced forward Sammy Woods, to lead the side in his 11th international. In contrast, Wales under the captaincy of the great centre Arthur Gould in his 21st international picked a very strong side containing seven players whose cap tallies were in double figures and just five new caps. To considerable surprise, England won the match by 14-6 after scoring three tries in the second half during which their inexperienced pack dominated the opposition in front of a spirited partisan Welsh crowd. 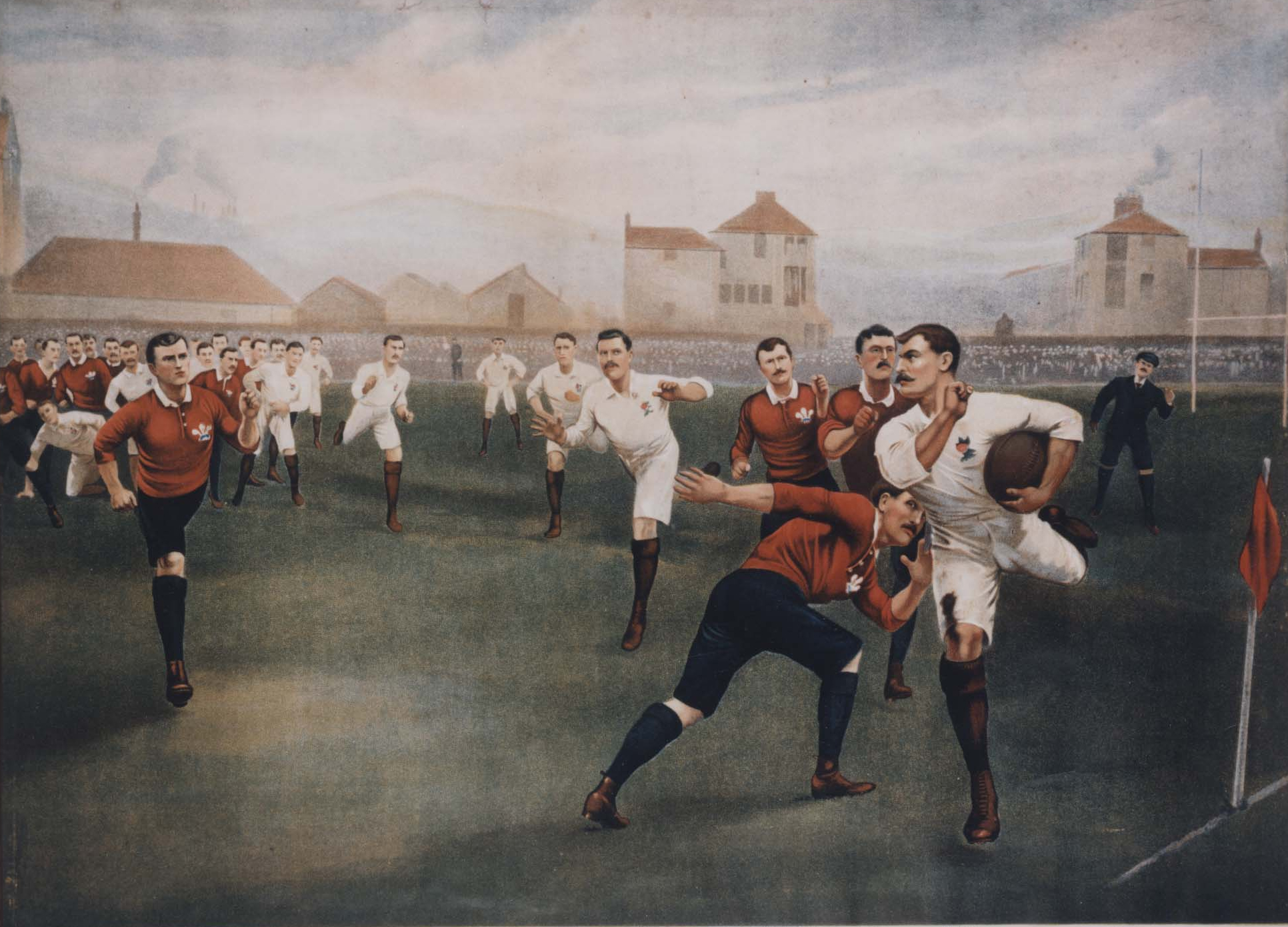 Wales then travelled to Raeburn Place in Edinburgh where they found a frozen ground which the Welsh players deemed unplayable. After prolonged discussion the referee agreed, uniquely in the history of international rugby, that the pitch be shortened by around 20 yards to avoid a dangerous icy patch near one end of the ground. In a tense encounter which was scoreless at half-time, Scotland won 5-4 through a converted try by their London Scottish winger JJ (James) Gowans who charged down an attempted touch clearance by the Welsh full back, Billy Bancroft. Bancroft redeemed himself by drop kicking a goal from a mark, then worth 4 points, but the Welsh forward Frank Mills was denied the potentially winning try in the closing minutes when the referee ruled that he had not "scored" after touching down on the wrong side of the taped try-line which had stretched during the course of the match. Fresh from their triumph in Swansea, the English side went to Dublin and defeated Ireland by 6 points to 3, the Irish try being scored by the promising debutant half back Louis Magee. Scotland hosted Ireland at Raeburn Place at the beginning of March after the match had been postponed twice. After a scoreless first half, the Scottish forwards assumed control and provided their backs with sufficient ball for them to score the two tries needed to record a 6-0 victory. Scotland travelled down to the Athletic Ground in Richmond to play England with both sides in search of the Triple Crown. England's pack was unchanged for the third time but the Scottish forwards dominated the forward exchanges and went on to win 6-3, all the points being scored in the first half. The England full back JF (Fred) Byrne had opened the scoring by kicking England's first penalty goal in international rugby but a penalty goal and a try scored by the West of Scotland forward GT (George) Neilson secured the day and the Triple Crown for Scotland. The final match of the season saw Wales beat Ireland by 5 points to 3. It was memorable for the try scored by right winger TW (Tom) Pearson who rounded his opposite number and sprinted past the full back in a thrilling 70-yard dash which ended up with a try under the posts and an easy match-winning conversion for Billy Bancroft. The 1896 Championship began with massive storm clouds brewing in the world of rugby. Professionalism had been outlawed by the Rugby Football Union at a meeting on 19 September 1895 and the consequent breakaway of many clubs in the north of England to form the Northern Union was to have a profound effect on English club and international rugby for years to come. Additionally the International Board had threated Wales with the loss of all international fixtures because of the Arthur Gould affair. 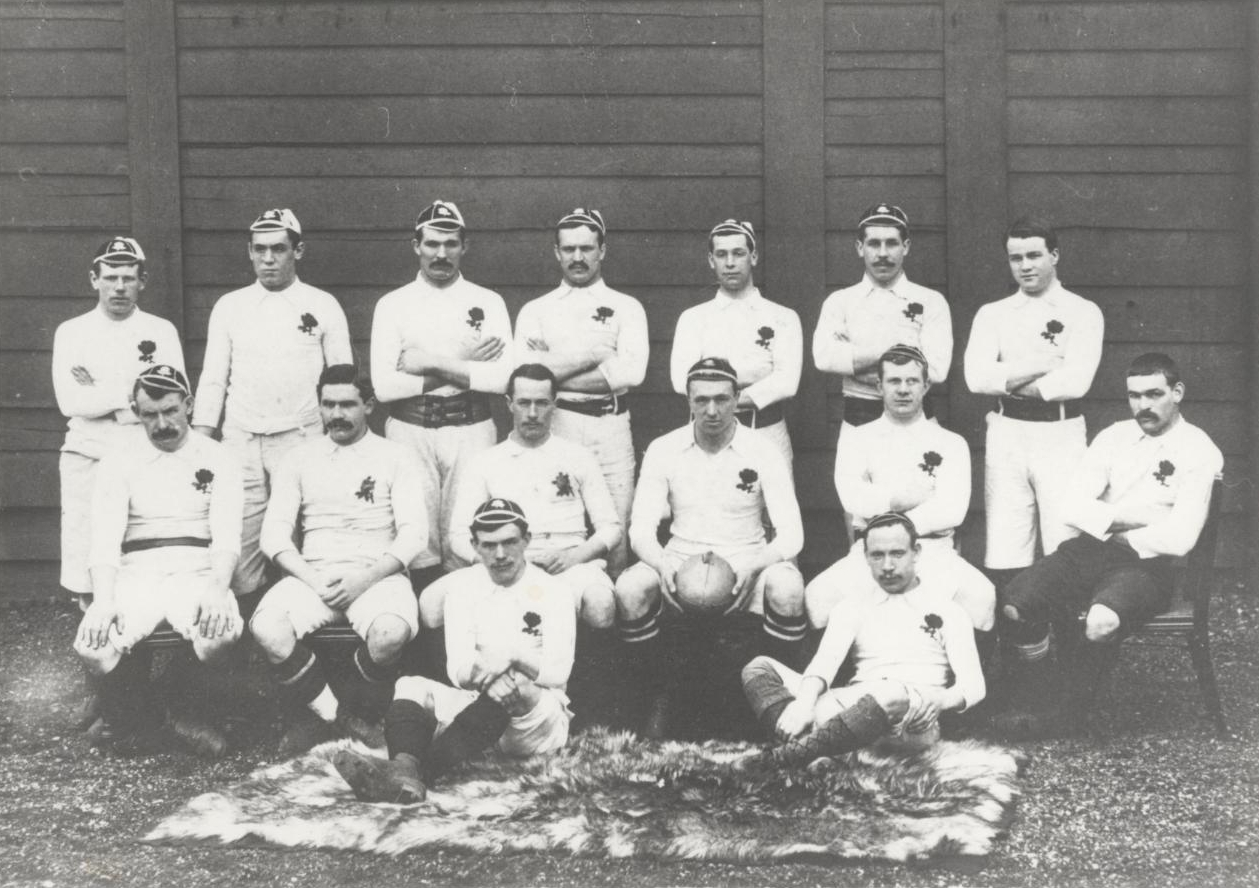 Nevertheless a very experienced Wales side, still with their captain Arthur Gould in his 24th international, travelled to Blackheath on 4 January 1896 to face an England side that once again contained a clutch of new caps. There were five players from northern clubs in the forwards following the North's convincing 11-3 victory over the South in December but no-one would have forecast the result as England thrashed Wales by 25 points to nil with both their northern wingers, Sammy Morfitt of West Hartlepool and Ernest Fookes of Sowerby Bridge scoring two tries each. Wales recovered their poise in a 6-0 victory against Scotland at Cardiff Arms Park where the richly talented EG (Gwyn) Nicholls was picked to win his 1st cap alongside Arthur Gould in the centre. England's comprehensive victory over Wales mattered little against a very strong Irish pack at the West Riding Club in Leeds on February 1st. Losing by 5-0 at half-time, a fine 40-yard drop goal by Fred Byrne brought England back into the game early in the second half. Ireland then took control and the centre TTH (Tom) Robinson scored the decisive try which secured them the game 10-4. Ireland and Scotland fought out a scoreless draw at Lansdowne Road before Scotland went on to beat England at Old Hampden Park, Glasgow on March 14th by 11 points to 0, a thrilling match in which the Scottish backs produced some superb handling in scoring three unanswered tries. The final match of the season on the same day saw Ireland play Wales at Lansdowne Road under the captaincy of their veteran centre Sammy Lee. Ireland fielded their most experienced team with 124 caps and beat Wales 8-4 to win the Championship for the second time. The 1897 Championship was severely disrupted. Neither Scotland nor Ireland was prepared to play Wales due to the ongoing row over the presentation to Arthur Gould by the Welsh Rugby Union of the title deeds to a house. As a result, Wales's match against England at Rodney Parade, Newport on January 9th 1897 was Gould's 27th and final international at the age of 32 as he retired following the match to avoid further disruption and disunity. He had captained Wales on a world record 18 occasions and won a record 25 caps as a centre three-quarter. Wales sent him off in style with a thoroughly convincing 11-0 victory over a very inexperienced England side whose selectors once again elected to blood nine new caps including seven forwards for this challenging fixture. England blooded four more new caps, this time in the backs, for their match against Ireland at Lansdowne Road but Ireland's pack was too strong. The England full back Fred Byrne, a star on the 1896 South African tour, became the first player to kick two penalty goals in an international but Ireland won 13-9 with their powerful winger LQ (Larry) Bulger, another South African tour star, scoring 7 points from a try and a goal from a mark. Scotland beat Ireland 8-3 at Powderhall, Edinburgh in a match which saw the final appearances of three distinguished Irish forwards, EG (Edmund) Forrest, AD (Andrew) Clinch and CV (Charles) Rooke who had won 43 caps between them. In the final international of the season England beat Scotland 12-3 in Manchester to leave the Championship tied between all four countries who had each won one match. In the 1898 Championship Scotland again refused to play Wales, and England delayed their decision until later so the tournament opened with England playing Ireland at Richmond. Sammy Lee the Irish captain fractured his collarbone in the second half and retired from the field and international rugby after winning 19 caps and captaining Ireland seven times. Despite finishing with 14 men, Ireland won the day with a Louis Magee try just before the end of the match. Scotland travelled to Belfast with eight new caps and surprisingly overcame Ireland 8-0 through two tries from Tom Scott of Langholm, their speedster from the Borders on the wing. 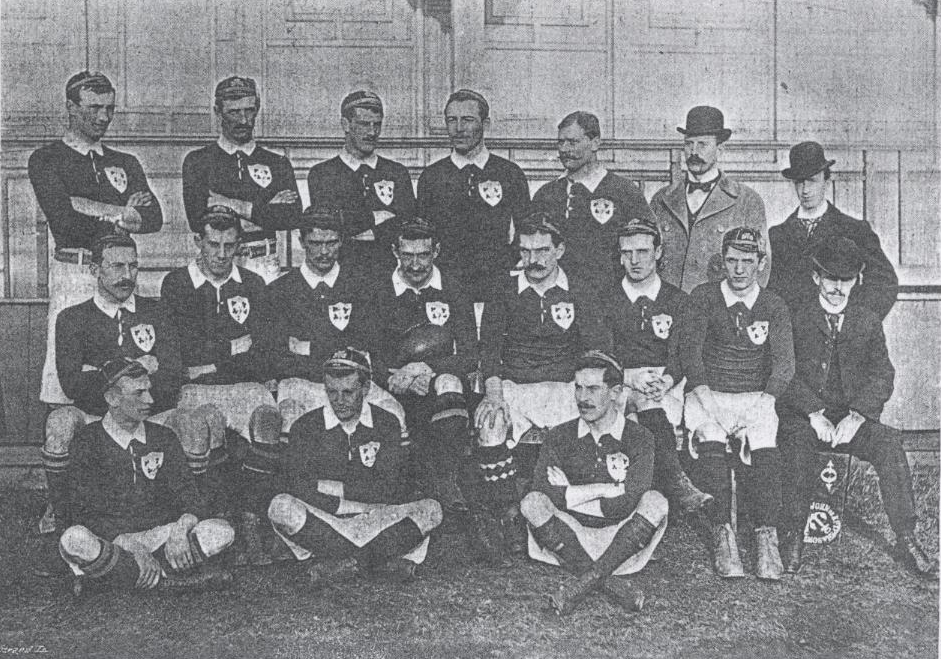 Scotland and England then played out a 3-3 draw in Edinburgh and Wales outplayed Ireland to win 11-3 in the first international played in Limerick. The match between England and Wales finally took place early in April at Blackheath after the two unions had settled their differences. Captained by the experienced full back Fred Byrne and with tries by the Stout brothers from Gloucester, Percy on the left wing and Frank in the forwards, England won 14-7, their last victory over Wales until the opening international at Twickenham in 1910. The final championship of the decade saw each country involved in three matches for the first time since the 1896 Championship. In a spectacular opening match, the young Welsh winger Willy Llewellyn scoring four tries on his debut in Wales' demolition of England at St Helen's by 26-3. England then lost to Ireland 6-0 in Dublin in a match that saw the final appearances of two players who had remained loyal to the Rugby Football Union - the full back Fred Byrne after 13 caps and the stalwart Rockcliff half-back Ernest Taylor after 14 caps. As the Scotland match against Wales was postponed due to a frozen ground, Ireland travelled to Edinburgh to play in the first match staged at the Scottish Rugby Union's new ground at Inverleith. Despite a brave effort by a Scottish team reduced to 14 men for much of the second half, Ireland scored three tries to win the match by 9-3. Wales finally travelled to Edinburgh to play Scotland on March 4th after the match had been postponed a record four times. The Scottish forwards were far too strong and ensured a convincing 21-10 victory over Wales before defeating England 5-0 a week later at Blackheath. England's third defeat gave them the wooden spoon for the first time. 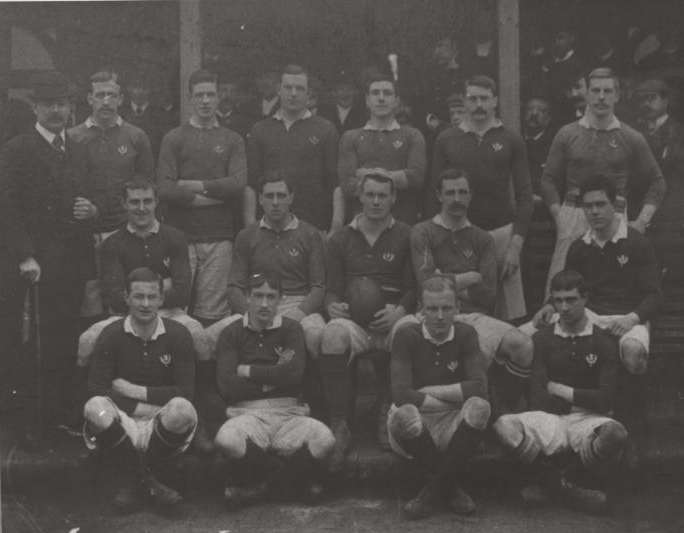 So all was set a week later for the final match of the 1899 championship on March 18th when the Irish team came to Cardiff Arms Park. A record and somewhat fractious crowd of up to 40,000 witnessed a ferocious encounter in which Billy Bancroft, the great Welsh full back, left the field with broken ribs after twenty minutes following a very heavy combined tackle by the Ryan brothers. It was the only time Bancroft left the field in his lengthy 12-year career. Ireland then scored what proved to be the winning try through their right wing Gerry "Blucher" Doran after 35 minutes. As the Wales team was unable to pierce the impregnable Irish defence in the second half, the 3-0 victory, the Championship and the Triple Crown went to Ireland. By the end of the 1898-99 season 57 matches had been played in the Championship in the ten tournaments since January 1890. Honours had been fairly evenly spread as follows:

Scotland led the way with 17 victories in their 28 matches (60.7%) but conversely, despite winning three championships, Ireland won only 11 of their 29 matches (37.9%). Arthur Gould and Billy Bancroft of Wales had both won 27 caps, overtaking Bill Maclagan, the Scottish three-quarter with 26 caps. The growing popularity of the championship was shown in the combined crowd figures through the decade which rose from 45,000 for the six matches in 1890 to 119,000 in 1899. Despite the trauma of the great split leading to the formation of the Northern Union, the championship had found its place in the sporting calendar. Rugby in the United Kingdom was primed for the extraordinary growth that was to come in the lead-up to the 1st World War epitomised by the visits of the All Blacks in 1905-06; the Springboks in 1906-07 and 1912-13; the Wallabies in 1908-09; and the arrival of France in 1906 as the fifth country in the increasingly popular annual International Championship.