Bob Collis' memories of watching Ireland against England at Lansdowne Road in 1911 were recorded in his book 'The Silver Fleece', first published in 1936. In this extract from the same book, he describes the emotional journey that came before, during and after representing Ireland at Twickenham in a memorable encounter on 14th February 1925. 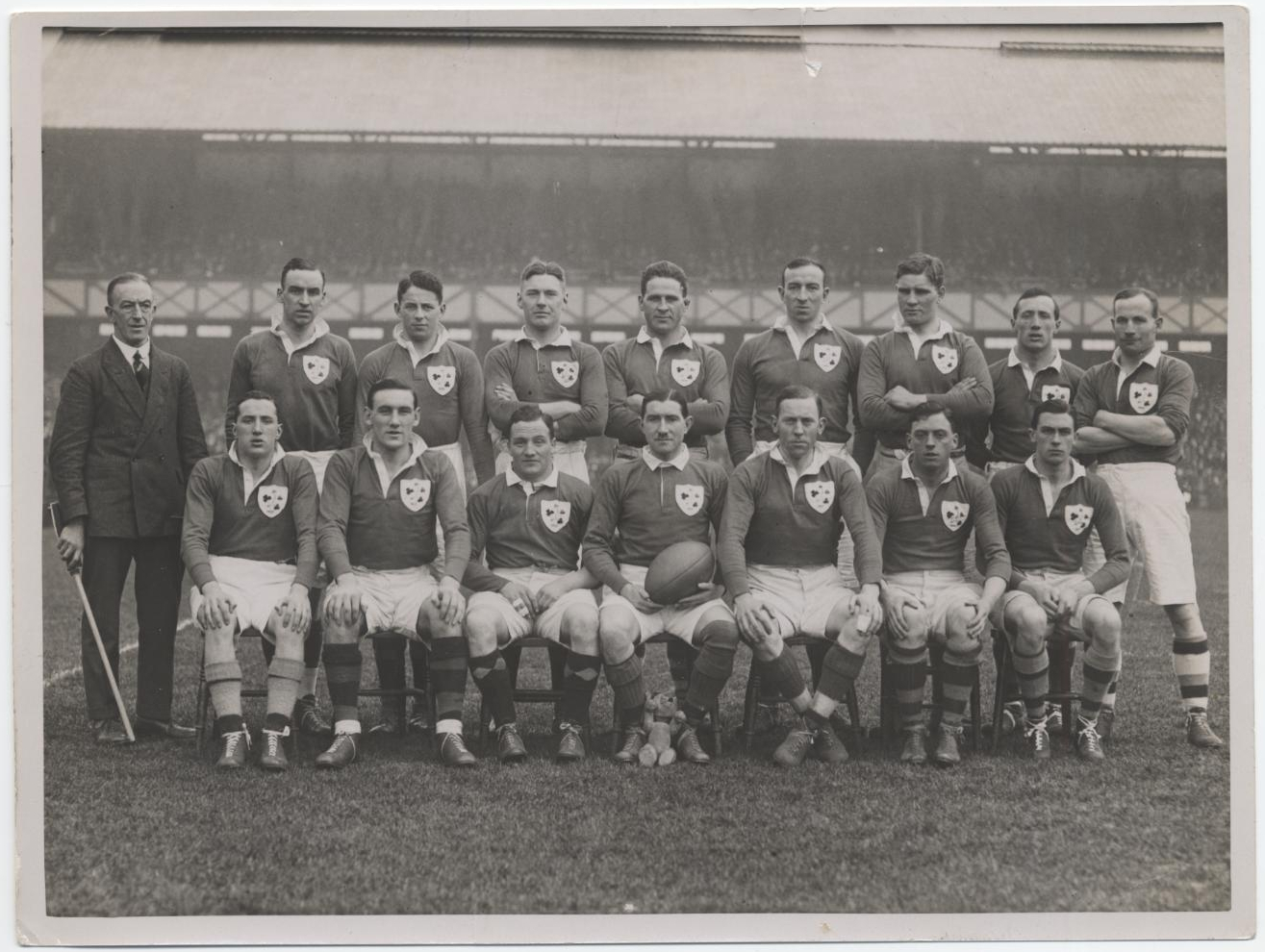 Ireland team v England, 14/02/1925, Twickenham[/caption] From all the matches I played in, of all the great moments when I have lived most, the day when Ireland and England drew at Twickenham in 1925 stands out. It was a keen February day. The sun shone, the wind had a nip in it, it was an ideal day for a big game. The Irish team lunched together at Richmond; our elderly supporters, the old internationals, ate large chunks of beef-steak, the players mostly cold beef and rice, coffee with plenty of sugar. My father, who had played for Ireland forty years before, swallowed his beef-steak and felt strong enough to take the field. We didn't talk very much, for already that feeling of weakness in the pit of the stomach that all athletes know had set in. We felt quite weak, as if the strain of running a hundred yards would tire us out; our eyes were slightly dilated, our pulses beat fast, we could feel our hearts thumping. We were all disquiet in mind and body, so we sang a few good tunes. We marched out proudly to our waiting bus in the narrow Richmond street, while a large crowd gathered and gaped. Then we were off, threading our way slowly through the queue of vehicles. I looked out in a sort of dream at the Twickenham crowd in which I had so often walked to the ground myself. It seemed unreal now to be one of the actors. The people stared at us, some waved, we looked back through the glass stupidly, the bus driver hooted continually, we sang another song, "Come all ye gay young fellows" our spirits rose. We arrived, dismounted from the bus, collected our bags and entered the enclosure behind the huge west stand, and were immediately surrounded crowds of autograph hunters, friends, acquaintances, and press people. We went in under the stand to our changing room. The air was electric with the expectancy of the thousands already above us. We started to change while privileged supporters, selectors, and messengers came in and out. Some stripped naked and lay down to be massaged, others put on their bright green jerseys, clean white shorts, and club stockings, and stood up stretching themselves, or sat quietly without a word, or got up and sat down nervously. Now each of us began to feel that glorious sensation of absolute fitness and muscular power. In each of us the lust for battle was rising... Time to go out to be photographed. As we emerged from the tunnel into the sunlight a great cheer went up from the now vast crowd that shut us in on all sides and was raised high above us. We looked up at the fifty thousand faces round about trying to pick out our friends, but all looked the same. Smoke rose in clouds from countless cigarettes. 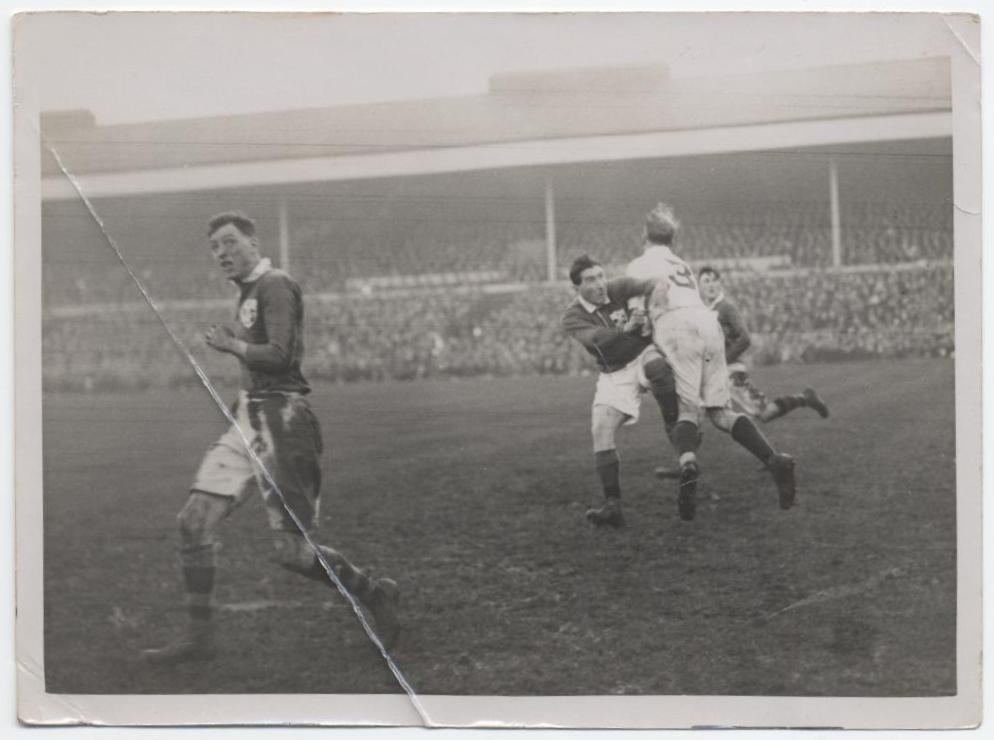 There were women there too, lots of them, but women had ceased to count in our world. Soon they would be asking silly questions of irritated males, each of whom would be projecting himself into the melee, a primitive fighting man for the moment. Afterwards they would come into their own again and we would willingly rest ourselves in their soft arms and give ourselves up to their charms, but now they were shoved aside with courtesy or roughness according to our training in good manners but none the less firmly, be they sister, mother, or lover. We liked having them there, but well out of the way, for this was a man's job, "the combat," even if we were only acting it in modern dress. Some royal personage now shook hands with each of us, walking down the rows of players. As his hand was gripped by each nervous muscular giant and shaken heartily, a slight spasm of pain could be seen to pass across his face. Long training in the modern privileges of royalty and a fine sense of duty, however, enabled him to endure to the end, though it seemed to me he looked wistfully at his crumpled hand while W. W. Wakefield led three hearty cheers. He was then led off by the President of the English Rugby Union to a seat beside Adrian Stoop. We went back to our underground changing room for a minute. It seemed like an age; the crowd above were stamping their feet. I felt the muscles of my arms, hard, I hugged myself. It felt good to be dressed lightly in clean new togs. I leaned against the wall, half shut my eyes, and began to wander off in imagination till became a spectator rather than a player. Into my reverie broke a voice, calling: "Now, Ireland!" "Am I really representing Ireland at Twickenham against England?" We filed out of the changing rooms there was a stir in the crowd; then as we reached the ground a great roar met us, a second louder roar, and the English had me on after us. A moment's hush and the ball soared up and fell among us. It was kicked back into touch, the game had started. 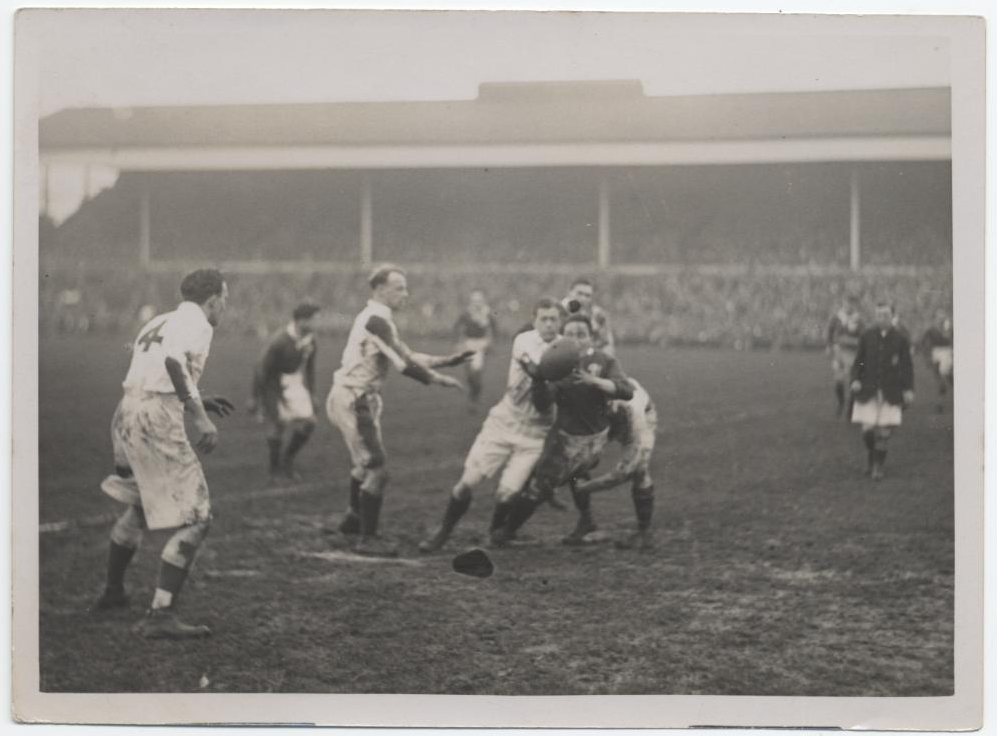 At first it was just a great game, but as time went on both sides warmed to their work. It was like playing in a continuous roll of thunder. No spoken word could be heard on the ground. Soon we had forgotten the fifty thousand spectators, forgotten who we were and everything in the world save the battle we were engaged in. We leapt at each other, dragging our opponents to the ground, fought like bulls in the melees by the touch line, ran through the air, fell tackled, scrambled up, kicked, fell on the ball, received tremendous blows, gave others. All the time our blood sang through our veins with a glorious joie de bataille. Suddenly Kittermaster, my Rugby school friend, who felt none of these things, the queer aloof creature with a superb body who only played rugger when he was made, slipped through and raced down the field. England scored, we were driven back behind our posts. But we weren't tired, we were mad to get at them again. We dashed out, full of resolve, but the English centres were through us again, and before we knew where we were we were back behind our posts once more. Now we went out to battle, a long pass went to Smallwood on the English wing. I just got him with a low dive as he was starting off about the English 25 line. Horsey Brown was up; we kicked the Englishman off the ball. We dribbled it right in under the posts. In the rush to touch it down Horsey ran into the post and was stunned. Then it was half-time. The Irish team got together; Forwards, you must rush them right off their feet when the whistle goes. We set our teeth. The ball landed in the hands of the English scrum half, but we were on him, carrying him, the ball and all twenty yards down the field till Wakefield hurled the whole lot of us into touch with one mighty charge. But on we came, down the field, a man fell on the ball. We kicked him off, another went down, a scrum formed we slipped the ball back, Sugden feinted twice, sold the dummy, threw a long pass to Stephenson; he raced over. Back to half-way amid a roar of triumph from every Irish throat in England. Off again; once more we did it, scoring far out- "All square!" -a man died of excitement in the stand. The crowd had gone crazy, and the roar rose and fell like waves about us. Grimly now we fought on. I was nearly spent, I had been knocked on the head and kicked in the stomach. I was bleeding from the mouth. It was nearly time we made one more frantic effort. Down to their line we rolled them and held them there for five minutes, but cross it we could not. Man after man was tackled within a yard nay, within an inch of the line. We were done, the English broke through our attack, back to half way, back to our 25 line, back to our goal line they pushed us. Under the posts we scrummed. In the loose Cove-Smith picked up the ball. I lunged into him but went down with a fierce hand-off, striking the post. It had checked him a second though, he was over the line but couldn't touch the ball down, for "Jammie" Clinch had him by the throat. I rose on my knees and clutched part of him; we lifted him, fourteen stone and all, off the ground, bent him backwards, fell on top of him and held him fiercely. The whistle blew. The English got the ball out, the scrum half threw out a long pass to Kittermaster. It didn't go quite straight, we were on him before he could move. The ball came loose. It landed in my hands, I kicked it. As I did so, a huge, vicious forward struck me, knocking the remaining wind out of my body. I went down dizzily, scrambled up drunkenly, the ball had gone into touch. The whistle blew loudly. Time, 6-6, a draw, honours easy, Ireland, England. The crowd broke on to the ground from all sides we were surrounded, lifted up on shoulders, beaten on the back. Strange Irish faces appeared, and gaunt hands reached up and shook ours. People whom we had not seen for years or were never to meet again appeared for a moment and were lost. The cheering went on. At last we reached the pavilion, battered, dead beat, but completely, blissfully happy, at peace with ourselves, utterly content for a moment in time. Next day, sitting in Cambridge House I read the Observer. On its front page it described the game as one of the finest ever played.

"If from two such fairly matched sides it is not invidious to select individual players we would like to pick out Corbet and Locke, the English centres, and Brown and Collis among the Irish forwards as the outstanding figures in the game."

I was content, and from now onwards I played solely for the joy of the game, and my mind began to think of other things and other worlds to conquer.