The following article by Leonard R Tosswill was first published in Rugby Football Weekly in January of 1929. It involves an imagined future (2029) in which women and men played rugby on the same team- women as backs, men as forwards. The female players are named after famous male international players of the 1920s, such as William Wavell Wakefield, Tommy Voyce and Arthur Young. 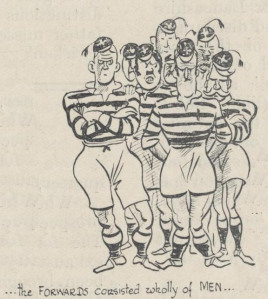 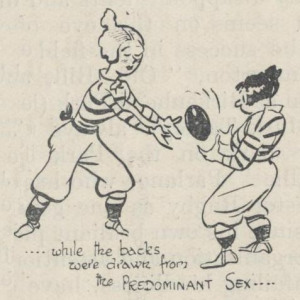 The 'tongue-in-cheek' article makes a number of bold predictions about the year 2029, referring to the large number of people who prefer to watch the action at home on their 'televisors', predicting the demise of political parties and referring to women as the 'predominant' sex. The article also alludes to some interesting rule amendments and cites 2029 as the year that rugby football will be banned forever by an act of parliament on account of the high number of female casualties during play.

The Last Game of Rugby by Leonard R. Tosswill The last game to be played before the Act for the abolition of Rugby football comes into force took place at Twickenham yesterday. The statistics of casualties in recent years, especially among women, provide its supporters with ample justification for their action. It was appropriate that the game should be played at Twickenham, the first official ground of the Rugby Union, and although to modern eyes the accommodation seemed very limited, there was sufficient space for the 50,000 spectators who attended. It is true that there was some crowding in the cheaper seats, but the Ministry of Health had taken adequate measures and their Ozone Germicides had been installed at all danger spots. Of course a very much larger number of people followed the game on their televisors, but there are still many who prefer to watch such a contest with their own eyes rather than on their screens. The teams which took part in this historic game represented two of the oldest clubs in existence, the Conservatives and the Liberal Union, and it is interesting to recall that their titles had their origin in the names of what used to be called 'Political Parties'. As usual the forwards consisted wholly of men, while the backs were drawn from the predominant sex. During the quarter and half-time intervals teams from Northolt and Hendon gave exhibitions of Aeroball, and their graceful and swift manoeuvres made the land game seem extraordinarily clumsy and slow. The Conservatives had the honour and started with that time-honored opening, No. 14. Their opponents replied with the Rowland Hill check, and the forwards were soon locked in a fixed gridiron. After two minutes' struggle the spectators began to get restive, but Miss Wakefield, the Conservatives' flying-centre, extricated the ball, at considerable risk to herself, and selling the dummy three times with much skill began to thread her way through her opponents with the precision of a perfect needle-woman. 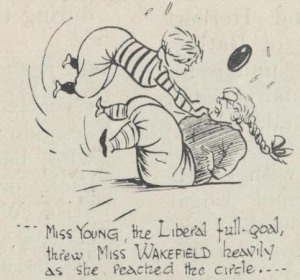 Miss Young, the Liberal full-goal, threw Miss Wakefield heavily as she reached the circle, but the runner managed to get a good arm-lock as she fell, and, after putting her opponent out of action, ran on and touched down in a good position. Miss Day, one of the best place-kickers of the age, shot a goal in the exact centre of the bar and thus secured the full 15 points and a substantial lead for her side. 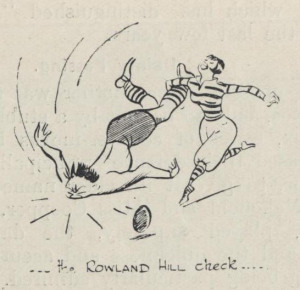 At the end of the second quarter the Conservatives lead had been reduced to 9 points, and in the next quarter, thanks to a well judged angle-kick from near the corner flag by Miss Voyce, the Liberals' wing-quarter, the lead was further reduced to 2 points. One opening after another was tried by the Conservatives, only to be met by a stubborn, if somewhat orthodox, series of counter-moves by the Unionists, who based their defence principally on the swing-back, or, to give it its older name, Welsh method. Miss Wakefield and Miss Cooper played superbly, the daintiness of their passes and the quickness and accuracy of their side-stepping being particularly admired. The end came with a remarkable series of twist passes by the Conservative quarters, which completely deceived their opponents. A final run by Miss Lowe drew the defence to the left wing, when with a neat drop-kick across the field, she enable Miss Stegman who was waiting in an excellent off-side position, to score a well deserved rouge-touch at line 75. The kick at goal was too difficult for any of the three kickers, so the Conservatives won by 22 points to 13. Much of the play reached a high level, and, as there were only three 'hospital' casualties, there was no contretemps to mar the match. The last game of rugby football played in England was quite worthy of the high traditions handed down from the past. 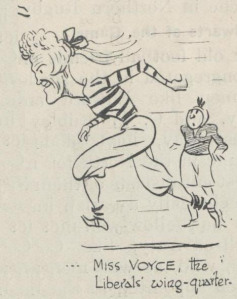 About the Author - Dr Leonard Robert Tosswill was a lock-forward who played three times for England in 1902. His comments about 'Ozone Germicides' might be explained by his profession as a Public Health Official.

More than 100 years after the foundation of the Rugby Football Union, another pioneering group of individuals sparked a revolution that would permanently change the face of rugby union in Britain…
Read More

The World Rugby Museum has recently launched an extended range of School of Ruck online learning resources as part of a new education partnership with Sporting Heritage, so today we’re sharing a Q&A with their Education Lead, Derek Peaple...
Read More

Women in Rugby Union: A Story Worth Telling

A new PhD project delving into the history of women in rugby union is being undertaken by Lydia Furse through the World Rugby Museum and De Montfort University. She tells us about her passion for rugby and her project aspirations in this Q&A.
Read More