'Omnes Honorate' or 'Honour all men' is the school motto of Portora Royal School for Boys, in Ennsikillen, Northern Ireland. However 'with a fine disregard for the rules' 10 year old Emily Valentine did precisely the opposite and convinced the boys to let her join in a game of rugby back in 1887. During the game, in which she scored a try, Emily realised her girlhood ambition, recording her experience in her memoirs several years later. 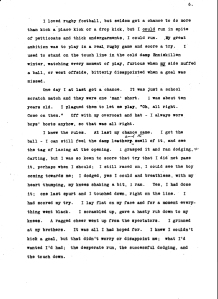 BBC Northern Ireland produced their own re-enactment of Emily's try in 2010. Since then it has been discovered that Emily wasn't quite the first female rugby player. In 1881 a series of international exhibition football matches, between female sides representing England and Scotland, were reported in several local newspapers. A reference to 'touch-downs' in the Liverpool Mercury suggests that at least one of these games was played according to the rules of rugby football.

The World Rugby Museum would like to thank John Birch, BBC Northern Ireland and scrumqueens.com for their contributions to this piece.