08 August 2014
INTERVIEW: How to win the Women’s Rugby World Cup by Gill Burns 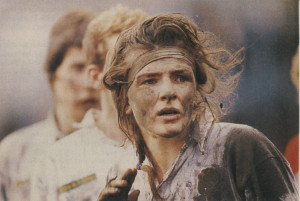 Q1: What kind of preparation is required prior to competing in a World Cup?

Total dedication. Even in the days when the sports science support was limited those of us who devoted our lives to rugby made very thorough preparations for the tournaments. Training programmes were designed so we would peak physically and mentally at the right time, often affecting us detrimentally in other competitions. We also tailored our diet and rest time. Early nights and a lack of partying in the months leading up to each event were necessary in order to peak at the right time.

Q2: Many women rugby players have full-time jobs. How do you balance your work commitments with the obligation of representing your country at a World Cup?

It was difficult. I live in the North West in Liverpool and our England midweek training sessions were based in places like Banbury and Worcester. It made for an interesting drive on a Wednesday evening, after a full days teaching. I regularly returned well after midnight but I was determined that women shouldn't have to live down South to play for England so I battled on. I also used to train every week day morning before school by going to the local pool and gym to bolster my aerobic capacity. I did my serious training every evening which consisted of rugby sessions, skills training, gym work, rowing and track work. I don't know where I found the energy!

During the 1994 World Cup I had to take 2 weeks off work as a PE Teacher in Warrington and although my Headteacher gave me leave of absence, she took 2 weeks pay off me, and interestingly didn't pay for a supply teacher! However in 2002 my Headteacher was proud to give me leave of absence and was very supportive of my international rugby commitments.

Q3: What family issues arise from travelling overseas to compete in a World Cup tournament and what special preparation might this entail?

For a single girl it is not too much of a problem, particularly if they have a boyfriend or partner who is supportive. However for those who have children or are married it is a difficult dilemma as there is such a massive time commitment to playing for your country. Players who have had children have sometimes had to bring them with them on tour!

Q4: During the tournament what kind of training schedules do you adhere to, and how does this differ from pre and post tournament?

Training was always a bit faster, shorter and more intense during the tournament. These sessions were always designed to go over final details as preparation was always made before we went to the tournaments. Recovery is vital and more time was spent resting and ironing out issues off the pitch in team meetings.

In the early days during tournaments we would climb over fences so that we could train in the local park.

Q5: What difficulties/opportunities may arise as a result of being in a different country?

Different cultures can be a problem but as the four world Cups I played in were in Wales, Scotland, Holland and Spain then this was not really an issue. Different diets can cause a problem but a lot of the teams thoroughly research where they will be staying and arrange for menus to be sent to the hotels so the athletes are suitably fuelled to perform at their best. Players also take their own personal preferences to snack on because most players who train this hard need to almost constantly graze on healthy and nutritious snacks.

Q6: Do you think that being the host nation represents a significant advantage?

It helps to have a big crowd supporting vociferously. As a player I would have loved my family and friends to have been able to come to see the games. I was lucky as my immediate family travelled to each of the four competitions I was in as they were all in Europe but it would have been even better if the event had been in England.

Q7: What can you tell us about team spirit and bonding during a world cup campaign?

It's fabulous! Even in World Cups where we underperformed the team spirit has been fantastic. You make bonds with people who will remain your friends for life. You have to be prepared to put your life on the line for these people and so you share a mutual respect.

I have to say though that the team I am closest to are those who won the World Cup in 1994. When you become a World Champion it is something you will cherish for life. The very special feeling that comes with that honour is shared with all your team mates. I am very much looking forward to our 1994 England World Cup Winners reunion in the summer the day before this year's World Cup Final. I very much hope that we will be able to cheer on England the following day.

Q8: How might the camaraderie amongst a World Cup squad continue after the tournament?

It continues every time you see each other. There's nothing like a bit of banter with your old friends. The funny stories get even funnier as time goes by and the tries we scored get better and better! We are lucky in England as there are always good quality women's games where old players can meet up.

Q9: What, in your opinion and experience, is the prime motivation amongst players playing international rugby at a World Cup?

To win the ultimate accolade.

Q10: Do you feel a greater sense of pride in representing your country than in other levels of rugby?

Of course. To play for your country is the ultimate honour and for me it was a childhood dream come true. I used to imagine singing the National Anthem whilst wearing my international kit but I never dreamed that the sport I could play would be rugby. In those days I imagined being an athlete, a swimmer or a hockey player. I thought rugby was a boy's sport - how wrong I once was! I will add though that rugby played at any level is enjoyable, particularly if you have a great set of team mates.