As the NatWest 6 Nations continued this weekend, our women's rugby historian Lydia Furse has been exploring those who have played at the national representative senior level for more than one country. Pulling on the shirt. Singing the national anthem. These are honours that many of us dream of, but only an elite few ever get to achieve, following years of hard work and dedication. For most, representing your country for the first time is a once in a lifetime experience. However, there are a select few in the history of rugby who have played for two different countries.

Here we look at 2 examples from the women's game: Debbie Francis, and Rimma Lewis. Both players made the move to Scotland during the 1990s, although at different times and having previously represented different nations. Debbie Francis Born in Scotland, Debbie was part of the pioneering England squad who lost in the final of the inaugural Women's Rugby World Cup. It is important to note that although now officially recognised by World Rugby, neither the 1991 or 1994 Women's Rugby World Cups were not under the jurisdiction of, nor supported by, any international governing body.At the time of the first Women's Rugby World Cup, Scottish women's rugby was part of the Women's Rugby Football Union, and did not have its own national team. However, Debbie was eligible to represent England through her long-term residency south of the border. A fantastic winger, Debbie brought speed and agility to the England team in every international the side had been involved in up to and including the first World Cup. The commitment she had made to rugby was clear, working hard to return to the pitch after the birth of her first son, and staying with the strong England side would have been her best chance of being a World Cup winner after the narrow defeat in 1991. She also lived and worked in London with her English husband Mark Francis, an experienced rugby coach, and the newly born Benjamin. But the call of the blue shirt and thistle could not be ignored, and when the opportunity to trial for the first ever Scotland squad came in December, 1992, Debbie took it. She never looked back, making all her remaining international rugby appearances for Scotland. The significance of her move was more than just the experience and pace she could bring to the team, as her husband Mark became an integral part of the Scotland coaching team which eventually led the squad to their first grand slam victory in 1998. Many of the Scotland squad from the '90s attribute their success to the professional attitude that Mark brought to the game, who was able to support the dedicated players to perform at their best. Although Debbie Francis is not able to claim a World Cup victory, she is one of only a handful of players, men and women, to represent both England and Scotland at senior international rugby. 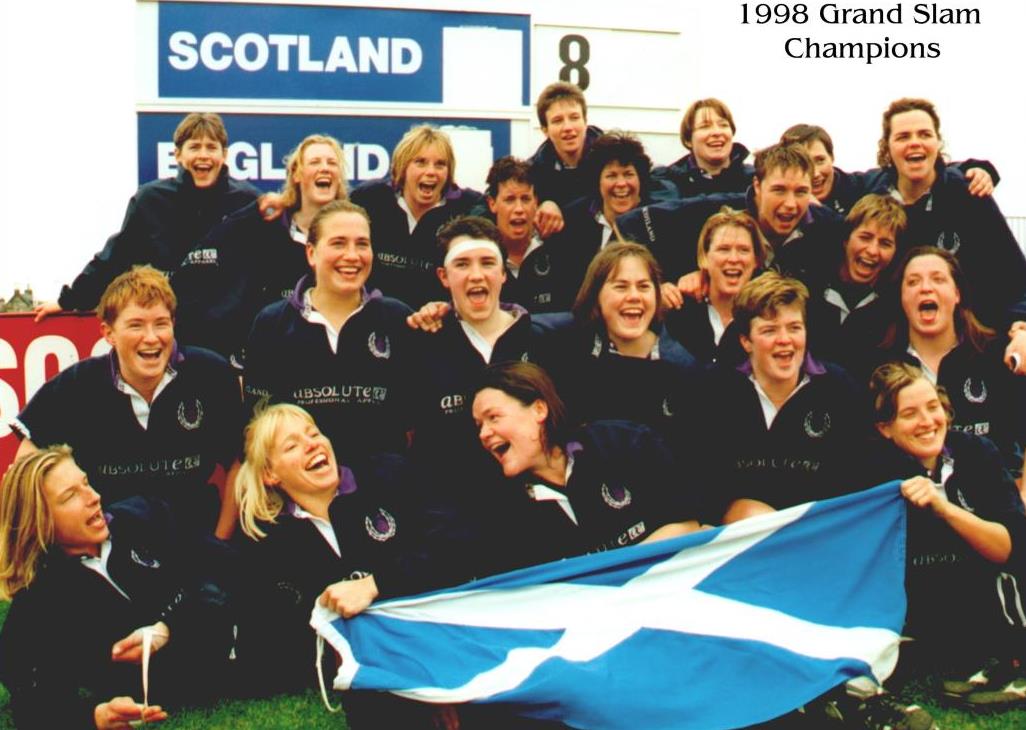 Rimma Lewis Rimma was born and raised in Moscow, Russia. Limited as her rugby playing experience was in her home nation, Rimma became an adept player on the fields of Aberdeenshire after her marriage to a Scotsman. Already living in Scotland, Rimma was surprised when the call came for her to join the Russian squad attending the 1994 World Cup, which was held in Edinburgh. She captained her home nation against Scotland, losing the game but catching the eye of the Scottish coaches at the time, who knew she would be eligible to play in a few years. Rimma made the natural move from the training squad to the pitch for her first Scottish international in November 1996 against Holland, and went on to represent Scotland in 3 World Cups until retiring from international rugby in 2006. Still living in Scotland, Rimma has made her life in her adopted country, showing that sometimes it is not where you are born that matters, but where you chose to be. Of course, under current regulations she would never have been able to represent a second nation, having already played for Russia. Living, working and playing her rugby in Scotland, this would have been an awful waste of Rimma's talent, and her long career attests to her commitment to the Scottish women's rugby team.

About the Author - Lydia Furse is working on a PhD entitled 'Women in rugby union: A social and cultural history, 1880-2016' which you can find out more about here. The current World Rugby regulations regarding eligibility for playing at a senior representative level can be found on their website. If you know of any other double internationals or want to share your view on representing two countries, please leave us a comment below.