Perhaps the easiest and most common path into memorabilia collecting is via the once-humble match programme. Some surviving examples from the 1880s and earlier were single-sheet, single-side even at international level, and intended mainly or solely as an aide-memoire and indication of the players selected. They gave (doubtless to the delight of the Scottish RU), no numbers for the players, since at first (and, with Scotland, for a long time) jerseys bore none. As the King was told, none were needed 'because this is a game, not a cattle market'! Forwards, in addition, had no specialised positions onfield and hence on programmes for many years. 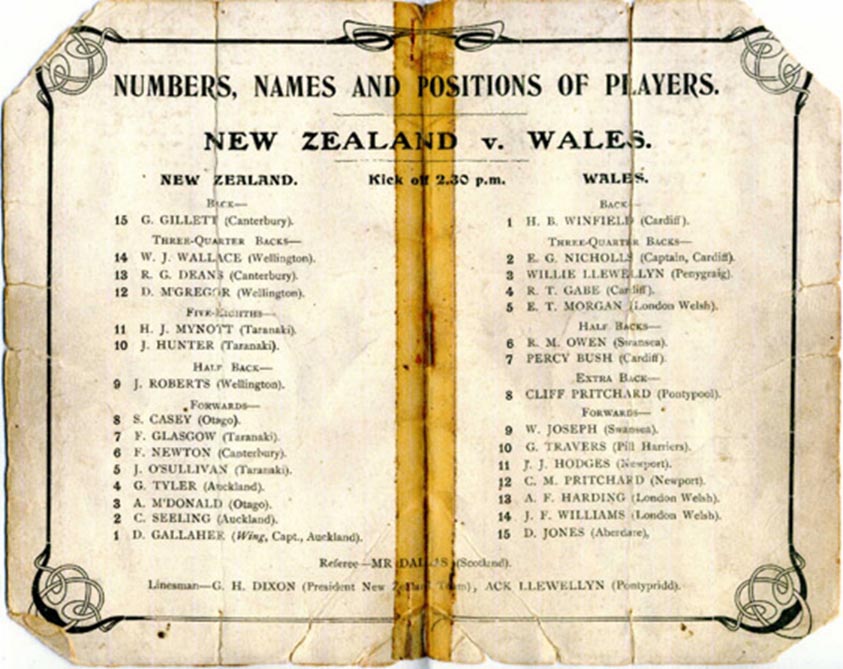 These flimsy bits of paper, purchased for perhaps two old pennies (less than 1p), were unlikely to long outlive the match. No wonder, then, that they are so rare even for the biggest games before 1900. If you find one, hold on: and if need be, get it conserved. Most were 'official', though there are quite early examples of newspapers or entrepreneurs, exploiting growing rugby interest and attendances, charging for 'pirate' issues with possibly less accurate details. Demand has now grown even for these 'bootleg' versions, which were produced at least to the 1950s in the UK - and the '80s in Ireland, with some humorously badly photocopied cut-and-paste attempts. 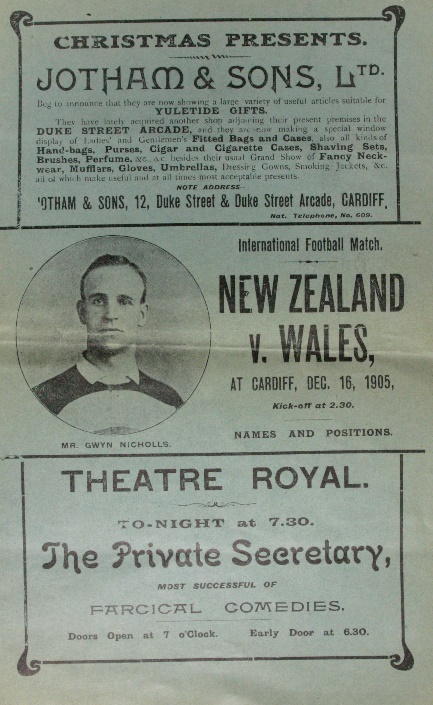 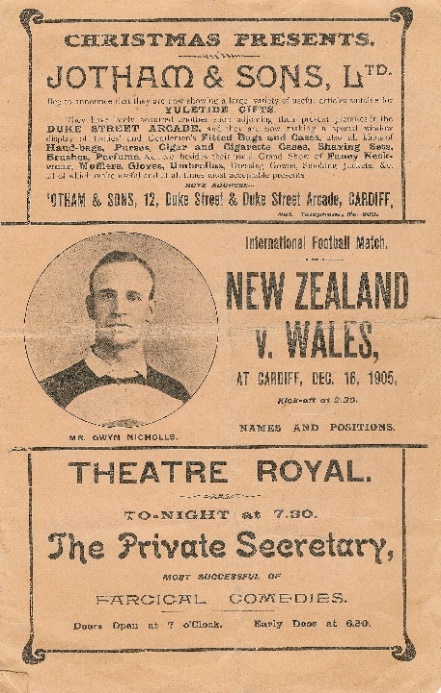 Wales v New Zealand 1905, that most memories-and memorabilia-laden game, has seen 'piracy' ancient and modern. By then the bigger clubs and certainly many 'Tests' boasted more substantial issues, with Wales' contemporary economic and national confidence (and historic win) reflected in the eight-page official offering's bold, part-coloured cover. This is regularly nominated as the 'holy grail' of programme collecting, with its historic importance across the hemispheres and controversial 3-0 result. There was another, wholly different unofficial version produced, including adverts, the great staple of most post-First World War programmes. That one too has grown in value, and the UK's No.1 dealer has never handled one. It inspired a reprint, either in 1935 or 1953, which has itself been sometimes sold as if was the 1905 issue: effectively a 'pirate of a pirate'. Sometimes false claims about a programme are accidental, sometimes not. That reprint was made from an original with glue-caused rips and newspaper print on the rear cover: it's not hard to spot, and it has a certain quirky attraction, but it can in no way be an actual 1905 issue. It's also hard to decide what the original colour was: has blue faded to buff, or the other way around, or were there always both shades? Souvenirs of the tourists sold well then and since, and in 1981 a reprint of the original official programme was privately commissioned, too, but with the fact of its reprinting clearly marked. Neither reprint is really valuable, though, and as with all memorabilia you should try to be sure about what you are getting. Look, check, ask!...' Very recently, NZ rugby-writing great Ron Palenski was also asking for information on this very programme on the 'Rugby Remembered'

Facebook page. Can any reader help shed more light on the 'Mystery of the 1905 Pirate'? Answers in the comments. 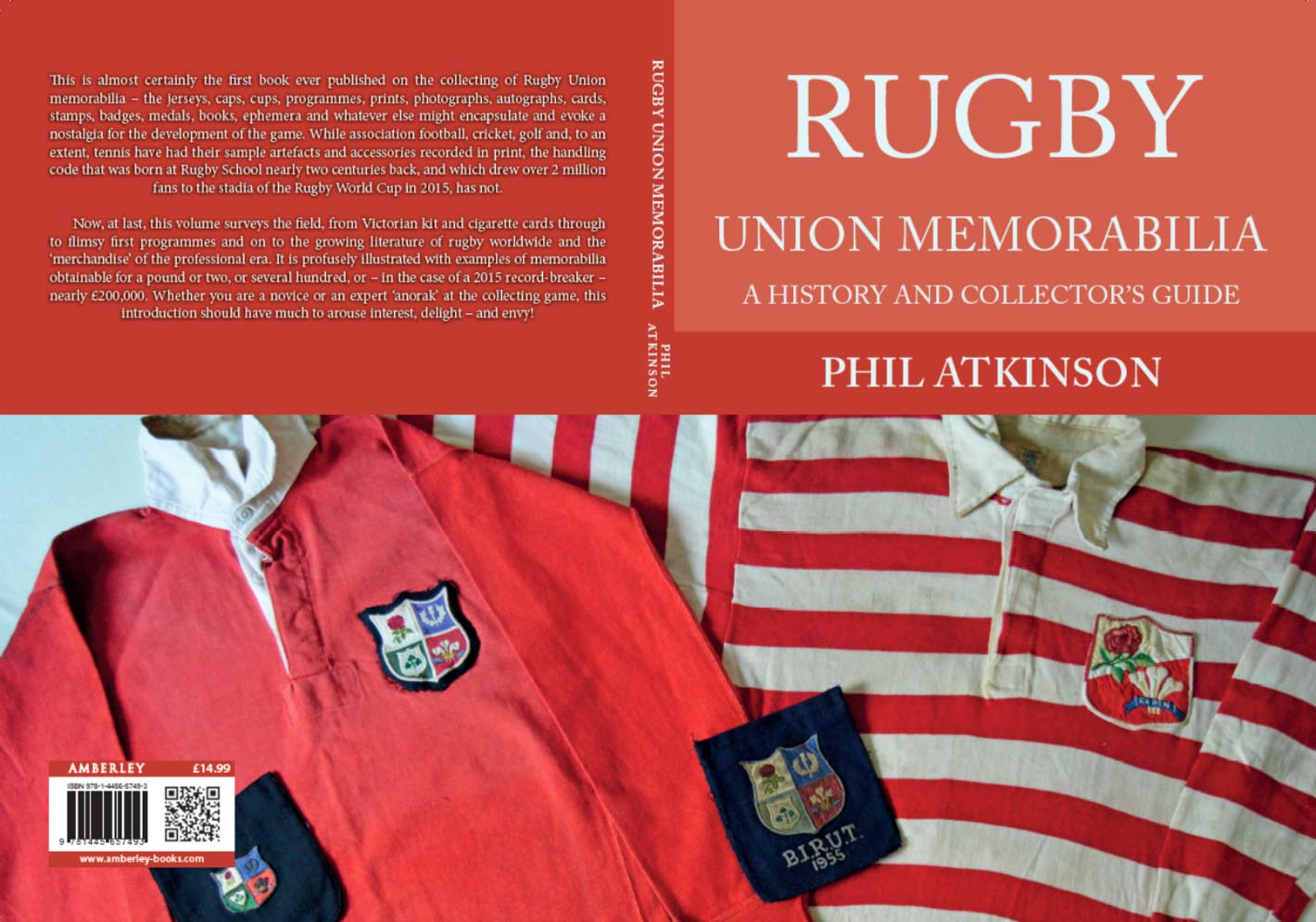 About the Author - Phil Atkinson is a former History teacher and Headteacher. He is President of Rhymney RFC and Editor of 'Touchlines', the magazine of the Rugby Memorabilia Society. He is the author of the Centenary History of Rhymney RFC, joint author of The King's Cup 1919: Rugby's First 'World Cup' and 'Rugby Union Memorabilia: A History and Collectors Guide' by Amberley Publishing.