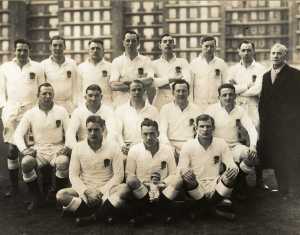 To the very best of our knowledge, HD Freakes is the only person to have taken a doll to his debut as an international rugby player. Quite why England full-back Freakes is clutching a ceramic doll before the loss to Wales in 1938 is anyone's guess. An early merchandising ploy? A forfeit for some heinous breach of team etiquette? The favourite doll of a family member? Some sort of dastardly de-motivational plot by the opposition… What we do know is that he doesn't look entirely comfortable in the act, and there was no repeat before either of his two subsequent caps. Equally incongruous is this doll of Robert Dibble, a formidable forward for England and the British Lions. Dibble was a West Country legend, winning a record 72 caps for Somerset and representing Bridgewater Albion and Newport. Dibble is believed to have taken the doll with him when he toured Australasia with the 1908 Anglo-Welsh (British Lions) team, of which Tom Smith was also a member.

Sporting mascots really took off in the 1960s. 'Dog' and his friends appeared in the comic strip 'Footrot Flats', that featured in the Wellington Evening Post between 1975 and 1994. A keen sportsdog, Murray Ball's creation was made the All-Blacks' official mascot during the 1970s. Ruckley has been the England Rugby mascot since 2012 and will be joined by Shaun the Sheep in advance of the 2015 Rugby World Cup. 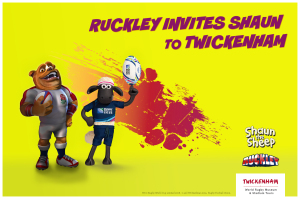