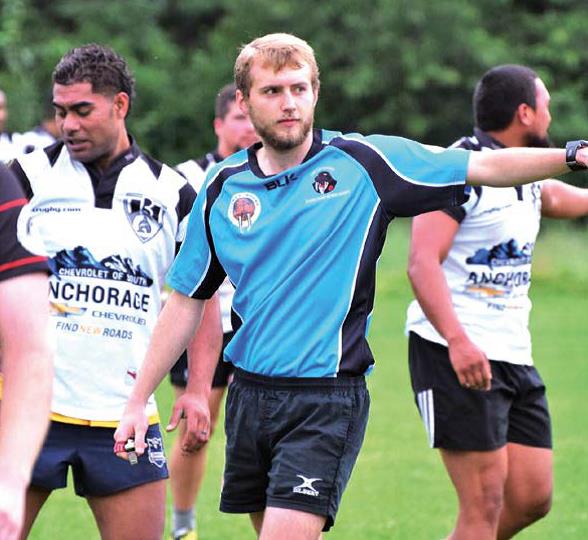 Alex Marsh, a 22-year old match official, flew to the other side of the world in June to tell the KYBO! community about the exciting refereeing opportunities that exist if you are willing to pack your boots and travel. The Roaming Referee is with Gloucester & District Referees Society and recently graduated from Gloucester University. He has spent the summer getting to know the referee communities in New Zealand, Australia and latterly Anchorage, where he discovered Pack Your Boots! in Alaska, also means run for your life when your neighbour is local grizzly bear. Alaskan referees take this kind of thing in their stride - where else do you get wayward Moose walking onto the pitch during a game? September 2017 saw Alex in Alaska as refereeing intern at the Alaska Mountain Range Grounds. Nestled at the foot of the mountain, this is probably the most spectacular rugby playing pitch in the world. Living in a log cabin, overlooking the main pitch, Alex is sharing his refereeing, coaching and training knowledge with a passionate and growing rugby community in north east America. During his travels Alex met and interviewed members of Referee Associations in New Zealand, bumped into Wayne Barnes and Matthew Carley in a hotel in Sydney and tested his skills as a Referee Coach at the State School Championships in New South Wales. Jamie McGregor, ARU Match Official Development Officer, told him why referees need to understand the importance of earning players' respect and Amy Perrett, an international role-model for women and girls, shared how she started officiating and her most memorable moment. Alex's boots had a run around when he took charge of a local match between Newport v Epping in New South Wales. Alex's video diaries have been watched by more than 24,000 members of the KYBO! community. To watch the series, visit the 'Pack Your Boots' playlist on the KYBO! Facebook Channel:

This article was first published in 'Touchline: The Official Newspaper of The RFU' in September 2017.