13 November 2017
Did Webb Ellis pick up the ball? Who Cares! by Dai Richards

'Understanding the Origin and Evolution of Sport' by Dai Richards is out now. Here Dai gives us a taste of what's inside.

There's no finer sight than a man who's picked up pace, running hard with the ball in hand, sweat glistening on his brow. There's a hint of a swerve as he heads towards the line and the crowd looks on as he makes one last effort to reach it. Then he sends the ball down to the batsman at the other end. Cricket - what a game. Its distinguishing feature is running with the ball. Over a day of cricket a fast bowler must cover at least a mile running forward with the ball in hand, and the crowd is there to watch just that. "Rubbish!" I hear you say, and of course, it is. Cricket is all about scoring runs - if a team scores fewer runs than the opposition then they lose the game, no matter how far they've run with the ball. Cricketers do, however, run forward with the ball far more often than Rugby Union players do, so why then is it that we think of rugby as a running game? Well, that's because in 1895 a group of four Old Rugbeians decided that it was, and in 1897 they published a report saying that somebody else had said it was. When no disputes followed, in 1900 they placed a plaque on the wall of Rugby School explaining that running with the ball is the distinguishing feature of the game of rugby, and everyone at the time blindly agreed. In my book I contest that "The Origin of Rugby Football" is one of sport's greatest confidence tricks. The 1897 report claims that Matthew Bloxam, a Rugbeian from before the time of Webb Ellis, identified the Webb Ellis event as the 'origin' of Rugby Football. What Bloxam actually said was that the event was the beginning of a change in one of the rules, and that running with the ball was the biggest difference between Rugby Football and Association Football, not the distinguishing feature of the game. So what was/is the most distinguishing feature of the game? Well, the aim of Rugby Football at the time of Webb Ellis was to score goals by kicking the ball over the crossbar. Both before the Webb Ellis event and after he died nearly 50 years later, in 1872, this was the only way you could win a game of Rugby Football. Even when in 1877 the aim of Rugby Union became to score more points than the opposition, the majority of points were still scored by goals. In rugby, running with the ball is just one action among many others: passing, catching, tackling, scrummaging, jumping in the line-out and, of course, kicking. Whilst it may be argued that running plays a far greater part of Rugby Union today, it is still the goal and has always been the goal that is the main scoring method. Throughout the evolution of Rugby Union, kicking the ball over the crossbar to score a goal has been its distinguishing feature. Therefore, whilst it's certainly possible that Webb Ellis contributed to the evolution of Rugby Football, the origin of the game must predate 1823. When criticising the validity of the Webb Ellis event as the birth of Rugby Football, modern historians have tended to link its origin to 'folk or mob football'. However, no link between Rugby Union and these ancient games can be found, and there is no evidence of another game or sport in which a ball was kicked over a crossbar having existed. Upon undertaking research of the history of Rugby School and of football at the school, I found that the game was first recorded as far back as circa 1783, with the oldest named player being Walter Savage Landor. Just five years earlier, Thomas James, a new headmaster and former Eton pupil, had introduced a brand new education system into Rugby School that was based entirely on Eton methods. Part of this system included a reward of 'play' for good work or behavior. That 'play' is thought to have taken the form of cricket in the summer and a variety of Eton Football in the winter. In his 1953 book on the history of the Football Association, Geoffrey Green states that Thomas James brought the 'Eton Field Game' to Rugby School, while I believe that it was most likely the little known 'Lower College Game', which ended in 1865. Both versions were reliant on the boys regulating and forming rules for the games, and both versions involved goals that were low to the ground. At some point the Rugby School boys moved their goals upwards, with their objective aim becoming to kick the ball over the crossbar. 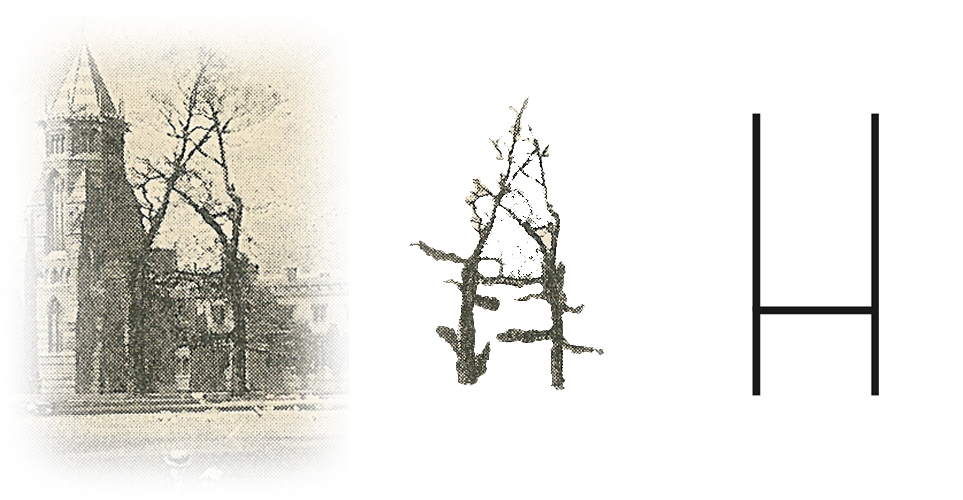 The above illustration is from Rev. F. Marshall's 1892 book 'Rugby Football', showing the trees at Rugby School. Did the branches from these trees form the first crossbar? This question is just one of many covered in the book.

ABOUT THE AUTHOR - Dai Richards is a se

lf confessed 'sportaholic'. From representing Wales at 6 different sports (cyclo cross, triathlon, mountain running, mountain biking, duathlon, and marathon kayaking), to winning the world championship at another. His full time job is running the rugby memorabilia specialists Rugby Relics Ltd and he coaches sport in his spare time. Dai has collected rugby memorabilia for 50 years and has one of the finest collections in the world. This is his first book. Understanding the Origin & Evolution of Sport - Volume 1 - Rugby Union by Dai Richards - ISBN 978-0-9531714-1-5 - signed limited edition - available on Amazon, eBay & www.rugbyrelics.com