Dave Allsop recalls friendships made on the terraces of Welford Road...

The last twenty years have seen many changes for rugby followers. Until the early 1990s a season ticket (well, membership) for Leicester Tigers cost £45 a year. For that, you could turn up and find a seat or position anywhere in the ground. Meaning that, while you saw lots of people you knew, there were always new faces around you. Then the club introduced debentures which meant that you had a fixed position. My wife and I took them up partly to help the club and also because it meant that we could wander to our seats just ten minutes before kick-off, rather than be there an hour earlier to get the seat we fancied. Suddenly, we were sitting with the same group of people every week. There must have been twenty or so of us who bonded together, commenting on events, sharing hip flasks and generally enjoying each other's company. We were a very traditional lot. If Leicester scored, the hip flasks would come out. If our opponents scored we would politely clap them back to the centre line (sometimes, admittedly with clenched teeth) and explain to each other where the Tigers (or more often, the referee) had gone wrong. 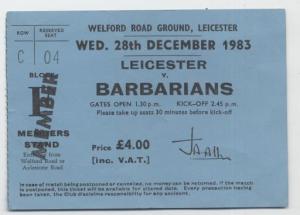 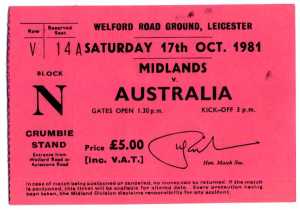 One of my new found friends was Ken. He had supported the Tigers for even longer than I had (well, he was older than me). He and his wife sat next to us. He was slightly disabled and couldn't walk very far. One of our perks was a car parking space adjacent to the ground to be shared between four debenture holders. I do not have a car, so was quite happy for Ken to use our debentures to obtain a space. There was always a great deal of banter between us all. Ken always wore a very smart cashmere cap, which I always commented on. I used to tease him that such a cap was well beyond my pocket and only for rich people like him. I made it clear that I aspired to such a magnificent piece of headgear and hoped to inherit it one day. I tried the cap on at every match and inspected it carefully to make sure that he was looking after my interest. The years went by and eventually the car parking concession was withdrawn. Ken found it difficult to park his car within walking distance of the ground, so started to come on a special coach from the part of Leicestershire where he lived. His walking difficulties meant that he took a long time to get back to the coach; he felt guilty because he was holding everyone up; so he decided to move to a seat nearer to where the coach picked him up. He denied that he was doing this solely to get away from the gang! I still met Ken occasionally on my pre-match strolls around the ground, and always inspected the cap when we did run into each other. My Christmas cards to him always asked after the cap, and his cards to me reassured me that it was still in good condition and being looked after. One day I returned from holiday to find a pile of post waiting for me. Among it was a foolscap envelope. I opened it, and inside was the cap. The letter from Ken's wife informed me that Ken had died, and she knew that I would want the cap to remember him by. It had been dry cleaned, and it came with a copy of the funeral order of service and notes about Ken's life. I was extremely touched by this lovely gesture. I think that it illustrates the old fashioned spirit and values of rugby. You met kindred spirits at matches and became almost a family. You shared the joys of the game (and a drink or two) irrespective of the result. And you shared a common bond with all rugby supporters, whoever they supported and wherever they came from. I shall wear the cap as the colder weather comes round. I shall remember Ken whenever I do wear it. And if, when you meet me, I happen to be wearing a smart cashmere cap, you will know its provenance (but you can't have it). 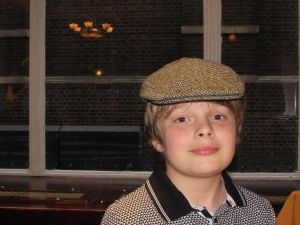 Dave's cap, as modeled by his Grandson Tom.

We would love to hear about your own special rugby memories. Please email [email protected] with your contributions.