To commemorate the passing of a century since the outbreak of the First World War the RFU has commissioned a special painting of England's 1914 Grand Slam winning side. The painting, by artist Shane Record, is based on a photograph of the England side in Paris on the eve of their final game of the season. It measures 3.0 x 2.7 metres and took 600 hours to complete. 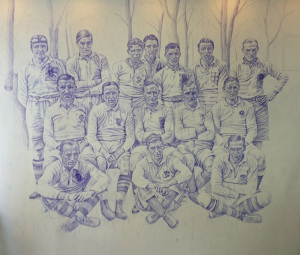 To begin with Shane spent a month sketching the work out, in detail, onto linen using a blue pen. Once this was complete he added the tonal detail in oils bringing colour to what had remained a black and white scene for over a century. This presented several challenges. 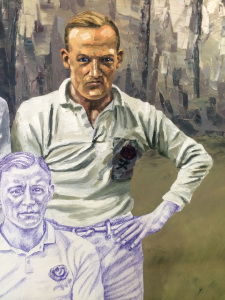 For example the English rose was not standardised until 1921 and player's socks were not standardised until 1931. Up until then players would wear the same socks that they wore for their clubs. Noticing the variation in tone for each player's rose Shane decided to manipulate the natural occurrence into an expression of loss, which is one of the painting's central motifs. 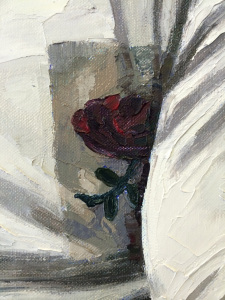 Of the fifteen players pictured, six would perish in the conflict, including the English captain Ronnie Poulton; and Arthur Harrison who would receive a posthumous Victoria Cross for bravery. The roses for these two players and the four others who lost their lives are rendered in shadow. Of the players who returned, several played again for their country, including WJA 'Dave' Davies who would captain England to a further two Grand Slams in 1921 and 1923; and Cyril Lowe who scored 18 tries for his country, a record that would stand for more than 60 years. 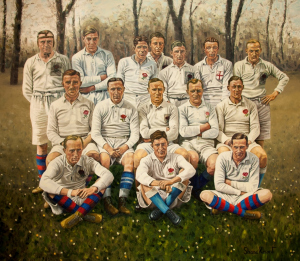