12 September 2016
The most iconic image in the history of sport? 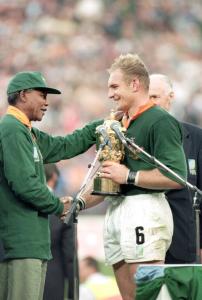 This photograph of Nelson Mandela awarding the 1995 Rugby World Cup to South African captain Francois Pienaar is one of the most iconic in sport and is significant on a number of levels. The tournament was a grand success and Joel Stransky's boot helped the hosts defeat the All Blacks to claim a maiden South African World Cup victory, in front of 62,000 fans at Ellis Park. It was also the first time that South Africa had hosted the tournament, something that would have been impossible just a few years earlier. The Gleneagles Agreement, signed in opposition to apartheid policies of racial segregation, had meant the Springboks had spent years in sporting isolation. Changes initiated by Nelson Mandela and F.W. de Klerk helped end the apartheid era and the Springboks were welcomed back to international rugby in 1992. Three years later they hosted the Rugby World Cup and the world's rugby community descended on a newly democratic, but still fragile rainbow nation. President Mandela saw, in the Rugby World Cup, an opportunity to heal race relations by turning the Springboks, a symbol of the apartheid era, into a team that could unite the whole country. The slogan, "One team, One Country" epitomised the role rugby had to play in helping South Africa progress as a community. Mandela wrote to fans and players in the match-day program for the final, thanking everyone for their support and for helping a young democratic South Africa to develop. That South Africa proceeded to win the famous Webb Ellis Cup is believed to have given the nation a crucial boost in helping create an environment conducive to resolving the societal differences. In this single moment we see the enduring power of sport to bring people together.