Discussion as to what comprises the best combination of players in the back row of a test pack has gone on for years. In recent times the All Blacks double World Cup winning unit of Richie McCaw, Kieran Read and Jerome Kaino has been particularly highly regarded and many pundits believe that England's 2003 World Cup success would not have been possible without the formidable combined talents of Neil Back, Richard Hill and Lawrence Dallaglio. In the late 1940s and early 1950s, three outstanding back row combinations emerged to drive their respective countries to periods of prolonged success. The Irish unit of Jim McCarthy, Des O'Brien and Bill McKay; the French combination of Jean Prat, Guy Basquet and Jean Matheu; and the South African trio of Basie van Wyk, Hennie Muller and Stephen Fry each achieved near legendary status.

Ireland had a mixed record at international level prior to 1940. They had only won two Triple Crowns, both at the end of the 19th century, and they had never beaten an international side from the Southern hemisphere. Occasional stunning victories had occurred over the other home nations and France but the norm was a frustrating inconsistency despite the undoubted quality of their best players. This changed dramatically in the years between 1948 and 1951. Their first Grand Slam in 1948 was followed by a Triple Crown and Championship in 1949 and a further Championship in 1951. In 14 matches during this period, the back row trio of McCarthy (Munster - 28 caps between 1948 and 1955), O'Brien (London Irish - 20 caps between 1948 and 1952) and McKay (Ulster - 23 caps between 1947 and 1952) provided the drive and security behind which the great Jack Kyle could weave his magic at Fly Half.

The French team had fared even less well since their appearance on the international scene in 1906 but their results improved notably after the Second World War. Although they were not to win a championship outright until 1959 following an unexpected two test series victory in South Africa in 1958, their results in the ten years after the war showed that they were becoming a serious force to be reckoned with on an annual basis. In February 1948, France inflicted a severe defeat on Wales at Swansea by 11 points to 3. It was France's first win in Wales and was notable for the power of the French pack, particularly the second row and back row who completely dominated their Welsh counterparts. That back row played together 22 times between 1945 and 1951, the first 19 appearances being consecutive. Jean Prat from Lourdes won 51 caps between 1945 and 1955. He captained France in 16 tests and, uniquely for a back row forward, dropped 6 goals among the 142 points he scored for France during his long and eventful career. Guy Basquet the No 8 from Agen won 33 caps, the first 19 consecutively, between 1945 and 1952 and captained France 24 times. Jean Matheu who played for both Agen and Castres won 24 caps and led France to victory in their second test in Argentina in 1949, his only test as captain.

In 1949, the Springboks defeated the All Blacks 4-0 in a test series in South Africa. This was the series in which the great back row forward Hennie Muller from Transvaal made his debut. A superb marauding No 8 with an uncanny instinct for where the ball was and a lethal tackler, he was to lead the Springboks in five tests in the British Isles and France in 1951-52 and in four tests at home to Australia in 1953. He was joined in these nine tests by Basie Van Wyk, the try scoring predator from Transvaal, and Stephen Fry from Western Province, a future Springbok test captain, to create a high class back row combination. They announced their talent on their tour of the British Isles when the Springboks thrashed Scotland in November 1951 by a then world record margin between major countries of 44-0. They went on to win the other four internationals on tour, although both Wales and England ran them close. The Australian 1953 touring party stopped the Springbok post-war winning sequence of 10 matches in a thrilling second test at Cape Town in September 1953, but the Springboks recovered to win the final two tests and take the series 3-1. Between them, Hennie Muller and Basie Van Wyk scored 9 international tries in these tests. A measure of the all-round quality of the Springbok side of this era was that in these nine tests, the Springboks scored 183 points with 36 tries and only conceded 52 points and 9 tries. 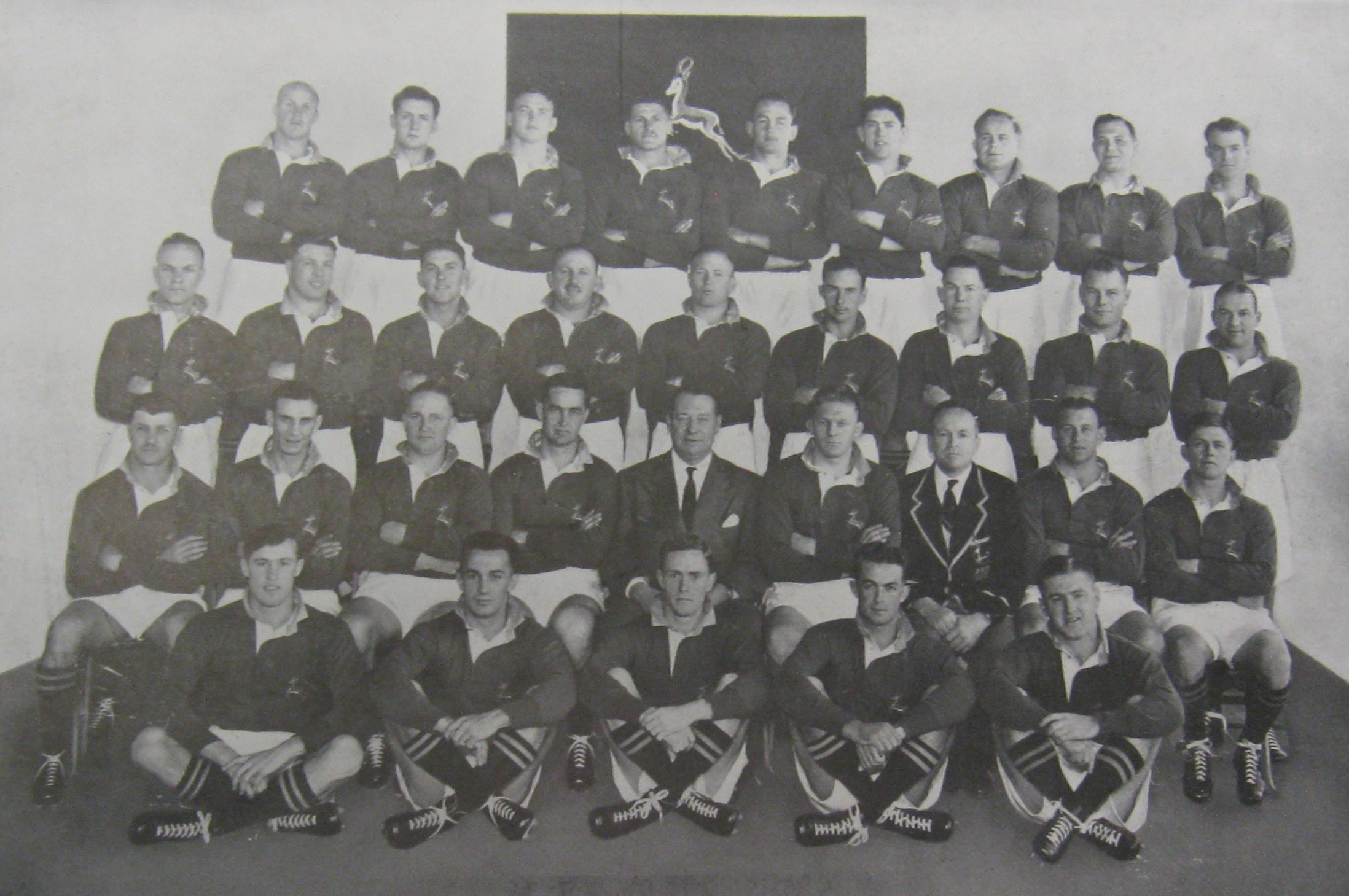