Last year an article in the Americas Rugby News pointed out the modern trend of international teams selecting foreign born players. In this article Richard Steele takes a look at the history of Scottish selections to determine whether this really is as modern a trend as everyone thinks it is...

The Scotland team has throughout its history often contained players whose qualifications to play for the land of their fathers, and on occasion their grandmothers, seemed less obvious. For many years up to the advent of professionalism, there was almost always a strong group of players from England, primarily from London Scottish, in or around the Scotland team. While the Scottish selectors did not operate a formal scouting system, it is certainly the case that highly rated players born and playing in England, but with Scottish antecedents, were actively encouraged to consider playing for Scotland. A survey of Scottish teams before the 2nd World War shows that Scotland has always relied for its strength on identifying players with less obvious Scottish connections. In 1889, James Marsh, born in England but educated in Scotland, played twice for Scotland in the centre against Wales and Ireland. He then moved back to the north of England where he played for Swinton and Lancashire and then for England against Ireland in 1892. He remains the only player to have played for both Scotland and England. In the opening decade of the 20th century, a clutch of southern hemisphere players with Scottish ancestry came to study in the UK. In 1902, Herbert (HH) Bullmore, an Australian by birth who had played for Queensland in 1894 and was studying medicine at Edinburgh University, was a late replacement for JM Dykes against Ireland. In 1902, WT (William) Ritchie came from Wanganui to study Mechanical Sciences at Cambridge University. He played on the wing against Oxford twice in 1903 and 1904 and then played on the wing for Scotland against Ireland and England in the 1905 Championship as a late replacement on each occasion. Ritchie was only the second New Zealander to play for Scotland. AN (Nolan) Fell from Otago was the first, a member of an all-international three-quarter line at Edinburgh University while a medical student, and he played seven times for Scotland between 1901 and 1903. He famously refused to play for Scotland against his home country when the All Blacks toured the UK in 1905 and he was never chosen for Scotland again. 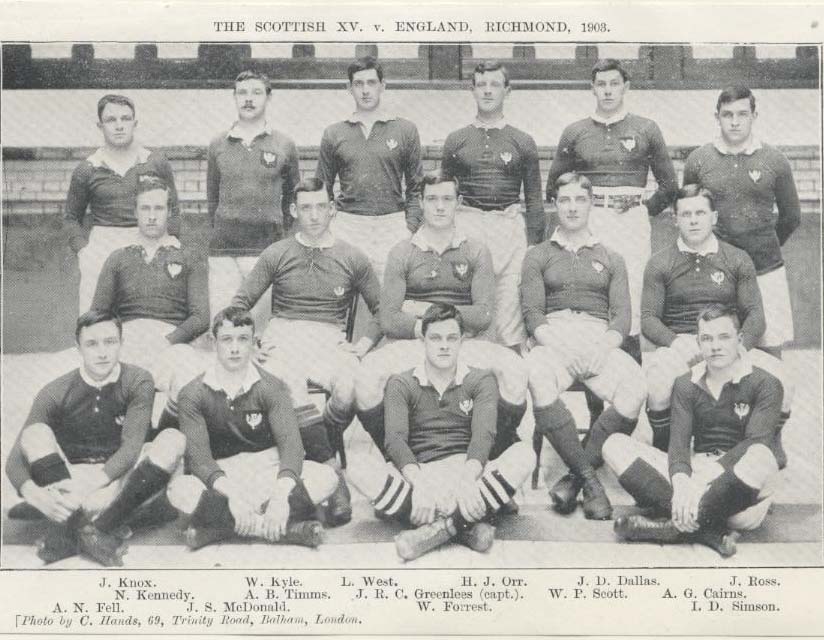 In 1903, Scotland fielded an all antipodean three-quarter line against England. Nolan Fell and JS Macdonald, a South African, were the two wingers and the centres, HJ Orr and AB (Alec) Timms were both Australians studying at Edinburgh University. After graduating in medicine at Melbourne University, Alec Timms went to Edinburgh to gain his surgical qualifications and played for Edinburgh Wanderers. He won 14 caps for Scotland between 1896 and 1905 and toured with the Great Britain team to Australia in 1899 where he played in three of the four tests. Although born in Scotland, CM (Colin) Gilray moved to New Zealand at the age of 4 and had already played for the All Blacks against Australia in 1905 when he took up a Rhodes Scholarship at Oxford University. He won two Oxford Blues and was capped four times for Scotland between 1908 and 1912. DG (Donald) MacPherson, born in Waimate (NZ), also played for the All Blacks in that 1905 test against Australia. He later came to the London Hospital to study medicine and won two caps for Scotland in 1910. WM (Mike) Dickson from Diocesan Rondebosch (Bishops) School in South Africa won a Blue at Full Back for Oxford University in 1912 and then won 7 caps for Scotland in 1912-13. His fellow Bishops student, SSL Steyn, went to Oxford as a Rhodes scholar where he won two Blues on the wing and represented Scotland against England in 1911 and Ireland in 1912. Dickson and Steyn were both killed in the 1st World War. Just before WW1, WA Stewart, Tasmanian-born and studying medicine at the London Hospital, scored 8 tries in just 4 internationals in 1913-14. DD (Denoon) Duncan from South African College was one of three South African forwards in the Oxford University side of 1919. He played for Scotland throughout the 1920 International Championship and won a further Blue in December 1920.

Perhaps the most famous of all the Scottish "colonials" was AC (Johnnie) Wallace. A pupil at Sydney Grammar School, he captained the Australian schoolboy rugby side and then played for New South Wales against New Zealand in 1921. He attended Oxford University as a Rhodes Scholar and won four consecutive rugby Blues between 1922 and 1925. He played 9 times for Scotland between 1923 and 1926 and scored 11 tries, including 6 tries in the Grand Slam season of 1925. Johnnie Wallace returned to Britain as captain of the 1927-28 New South Wales touring side and played against Scotland. Alongside him in the Scottish three-quarter line in their Grand Slam season was GG (George) Aitken, a graduate of Victoria University but also a Rhodes Scholar at Oxford, who had captained New Zealand in the first two tests of their 1921 series against South Africa. An Oxford Blue in 1922 and 1924, he played in 8 internationals for Scotland between 1924 and 1929. MMcG (Malcolm) Cooper, a New Zealander from Massey Agricultural College, won 3 Blues at Oxford and captained the University side in the 1935 and 1936 Varsity matches. He won two caps for Scotland against Wales and Ireland in 1936 and subsequently became a distinguished professor in the field of agriculture. And the line continued after the war. GL (George) Cawkwell was another Rhodes Scholar who won two Blues as a forward for Oxford in 1946 and 1947 and won his only Scottish cap against France in 1947 in the first official Scottish international after the war. His entire career was subsequently spent as a professor at Oxford University.