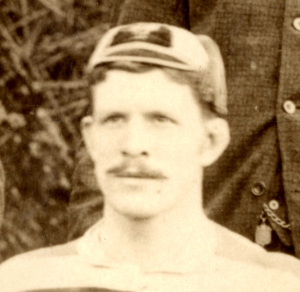 Bob Seddon was the only player to have been described as being 'good at every point of the game' in Lillywhite's 1886 Football Annual. Elsewhere the versatile broad shouldered forward was described as 'one of the best forwards in the north' and a 'typical Lancashire Lad'. Seddon lost both his parents at an early age and had grown up an operative in the manufacturing districts of Manchester. Off the field, as well as on it, he was respected as a sportsman and a gentleman. He had earned 3 England caps in 1887, retaining the Calcutta Cup in the process, and it seems likely that he would have gone on to win more due to his hard-working, determined but fair approach on the field. In 1888, he was elected by his team-mates to be the first ever captain of a side that would go on to become the British and Irish Lions. He scored three tries on the tour but was tragically killed in a sculling incident on the Hunter River in New South Wales.

About the Author: This article is an extract from the book One of Us: England's Greatest Rugby Players, available here. Phil McGowan has been a member of the World Rugby Museum team since 2007.