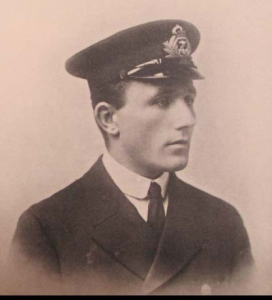 Francis Oakeley was the fifth son of the vicar of Holy Trinity, Hereford. His father James and his mother Frances had 11 children in all. He was educated at the Cathedral School in Hereford from where he went at the age of 13 to the Royal Naval College at Osborne on the Isle of Wight, before transferring two years later to Dartmouth to complete his training. He passed out on 15 September 1908. After experience with battle and cruiser squadrons he became, in 1913, one of the Navy's early submariners. Early RN submarines (Classes A, B & C) were essentially for coastal waters, so a posting in 1914 to the new ocean-going D class would have been an important step up for the young Lieutenant Oakeley. From his time at Dartmouth he had participated in association and rugby football, and also at fencing, where he won competitions for sabre and for foil. His promise at rugby was the most evident, and he was soon playing for United Services and for the Navy. The first of his four caps for England came v Scotland at Twickenham in 1913, where a narrow home victory secured the Grand Slam. The following year, again at HQ, Oakeley played in front of the King, Prime Minister Asquith and 40,000 fans when England beat Ireland 17-7. The remaining two matches, in what proved to be England's second successive Grand Slam, were away to Scotland and to France, the last being England's final international before war broke out. Including Oakeley, six of England's XV in Paris had lost their lives before the end of the war. 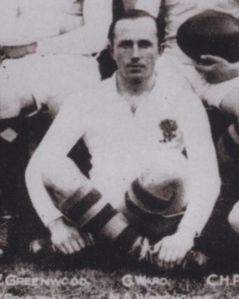 The submarines were quickly in action after war had been declared. By November 1914 HM Submarine D2 was patrolling in the rough North Sea where, on 23 November, her captain was swept overboard and Oakeley took command. After a fruitless search he returned to Harwich from where, within 48 hours, D2 was sent back on patrol under a new captain. She was never seen again. Lieutenant FRANCIS ECKLEY OAKELEY died at sea. He has no known grave.