Born in Petrograd (now St Petersburg) on 17th February 1916, Prince Alexander Obolensky was the son of an officer of the Tsar's Imperial Horse Guards and his wife Princess Luba.

Revolutionary upheaval in Russia at the time of the young Prince's birth forced the family to flee their homeland and they were offered safe passage to England where they made a home in Muswell Hill, North London. 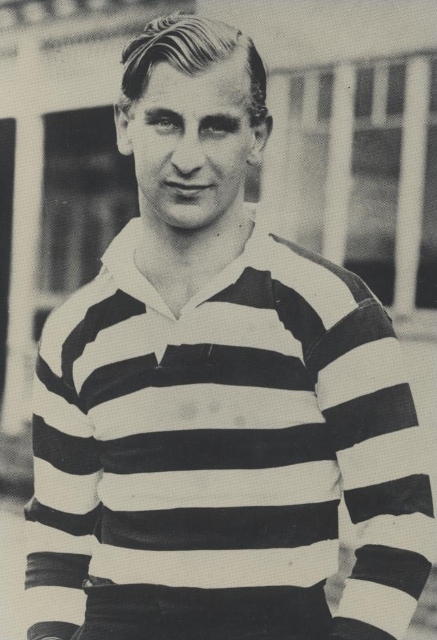 Alexander played his first rugby at Trent College in Nottinghamshire and went on to represent Nottinghamshire, Lincolnshire, Derbyshire, Leicester Tigers, Rosslyn Park and Midland Counties. However it was as a sporting blue for Oxford University that he first came to the England selector's attention in 1935. A degree of controversy surrounded the granting of British citizenship to the Obolensky family in 1936, but this coincided with the winger representing England against the All Blacks on the 4th January at Twickenham. The game saw England record their first victory over New Zealand with Alexander Obolensky scoring two sensational tries in a 13-0 victory. He went on to play four times for England, twice for the Barbarians and represented the British Team on their 1936 tour of Argentina and the United States. Two years later Alexander answered the call of his adopted country and joined the Royal Air Force Volunteer Reserve. On 29th March 1940, aged just 24, he was tragically killed in a training exercise at Martlesham Heath, Suffolk and buried with full service honours in Ipswich War cemetery. https://www.youtube.com/watch?v=tGtdxuhjcqI&t=1s About the Author - Phil McGowan is Curator at the World Rugby Museum. He has published several books about rugby and Twickenham, which are available to purchase on Amazon.