Extracted from 'Babbled of Green Fields' by Denzil Batchelor 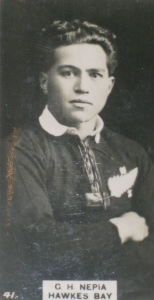 The New Zealand full-back was nineteen years old, and he was the only man in the side who played every match of the tour [NZ to UK, 1925]. He was only five feet nine inches high, but he was that phenomenon among athletes, a massively built man trained as sharp set as a greyhound. He seemed to be made of mahogany. His legs were new-stripped glistering tree-trunks. His head, set on his short neck which would have buckled a guillotine, was crowned with blue-black hair, brushed back over his scalp. He had the poise of a panther: always on his toes, bent forward to spring to the kill. His eyes were no adjunct to a smile. They were for ever staring unwinkingly to the horizon, in the search for prey: the eyes of a falcon. He tackled with the sound of a thunderclap, and punted low and deep, gaining fifty yards with a wet, heavy ball with contemptuous ease in the teeth of a forward foot-rush. His unique feat was to gather a ball off the toes of a phalanx of forwards and - disdaining to fall on the ball - smash his way with it, generally backwards, through the whole ravening pack. He had played five-eighths for Hawkes Bay, learning to open up the game for his three-quarters. New Zealand only bothered to choose one full-back for their touring side. If they had chosen one half as good as Nepia he would have done the job for them.

About the Author- Denzel Stanley Batchelor was a renowned journalist, writer, playwright and broadcaster who often wrote about sport. Born in Mumbai in 1906, he witnessed first-hand the 1924 touring New Zealand side, for which Nepia played. A contemporary of CB Fry he penned at least 30 books. This extract was taken from 'Babbled of Green Fields. An Autobiography'.