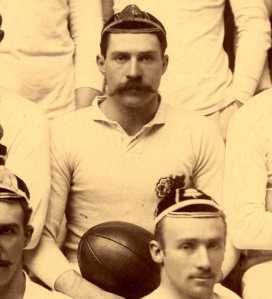 The man dubbed 'the most famous sportsman in Queen Victoria's empire' was born in County Durham in 1860. His sporting proficiency was quickly recognised and he became only the second man in history to captain England at both cricket and rugby. Brilliant as a wing but equally adept amongst the centres, Stoddart was described as a dashing individualist who, once in his stride, was practically unstoppable. A fierce competitor, he won many matches with the accuracy of his drop-kicking and is known to have regularly hurdled opponents in search of the try-line. He was first selected for England in 1885. Between 1885 and 1889 he played in six tests without defeat. He then captained his side four times over the following four seasons. Away from the national side he became the first captain of the Barbarians invitation side and also captained the side that would become the British and Irish Lions during their first tour in 1888. He is also on record as being the first player to have scored an underwater try for Harlequins on a waterlogged Chislehurst Common. He reportedly played his last games for England with elastic knee caps on both knees, anklets on both ankles and a rubber bandage on his elbow. The following is an extract from a poem printed in Punch magazine after Stoddart had captained the English cricket team to their ashes victory in 1894/5:

Then wrote the Queen of England,

Whose hand is blessed by God,

I must do something handsome,

For my dear victorious Stod'