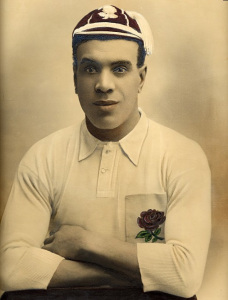 During my time at the World Rugby Museum I have found myself interested in the social history behind the game, the life behind the players. Jimmy Peters, a relatively unknown figure, was the first Black England International Rugby player. With a fascinating life, Peters should be known as one of the many black icons to have pushed the boundaries for race equality. James (Jimmy) Peters was born in Salford in 1879 to a white mother and West Indian father. During his childhood both he and his father worked for a circus, Jimmy as a bareback rider. Tragically his father was killed by a lion, mauled to death in a cage. His mother transferred him to another troupe where, after breaking his arm, he was abandoned. After all this turmoil a kind lady sent him to a London orphanage - Fegan's in Southwark and then Little Wanderer's Home in Greenwich.

The Rescue, edited by J.C.W Fegan, writes of the "jolly little boys" in Fegan's homes. One account describes Peters:

"Jimmy Peters is the champion athlete. He seems constructed differently to other humans- all joints and springs inside - resilient as India-rubber in some parts, hard as ebony (and nearly as black) in others. At cricket or football Jimmy is admittedly the non-pareil captain. But it was on a Roll of Honour Day last March when we had our Athletic Sports at the London Athlete Club ground at Stamford Bridge, that Jimmy revealed an acuteness that astonished us all. For some days before hand, the excitement rose to fever point, for the interest in athletics is very keen, and knots and mites were discussing their chances for this or that event. I understand Jimmy "lay low" and wore an inscrutable, Sphinx like face-but when the day arrived, he just swept the board. The 100 yards mile, long jump, high jump, walking race, kicking the football, and throwing the cricket ball. Now and then it seemed the chain of success would be broken, but at the pinch Jimmy could always do "the little bit extra" to win. But Jimmy's best performance that day we all felt was when he gallantly gave up on of his own prizes to another fellow who had been his close rival. The fact is Jimmy was trained in a circus, and was a bare-backed rider, when he met with an accident, and was deserted with a broken arm by the troupe to whom his mother transferred him, although his father met with a shocking death in a lion cage. A kind lady sent him to us from Dorsetshire, and has cared for him ever since."

With a clear talent in sports, aged 15 he was captain of his orphanage rugby team, it is here where he became a fan of Blackheath. In April 1895 Peters joined a printing department in Southwark Street; by the end of 1898 he had started doing carpentry and moved to Bristol. By now recognised as a brilliant fly-half, Peters played for Bristol, Plymouth and Devon winning five caps for England between 1906 and 1908 and helping Devon win the County Championship in 1907-8. 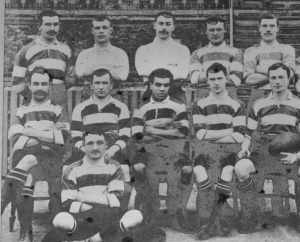 On 17th October 1906, Peters lined up for Devon against the touring South Africa at Plymouth County Ground. It was reported that despite 20,000 people being in attendance the visitors refused to take to the field. Having belatedly noticed Peters the Springboks refused to play on the same pitch as a 'savage'. Eventually they agreed to play after some persuasion from the South African High Commissioner and local dignitaries who feared a riot if the match was cancelled. Later in his career Peters switched codes, playing as a professional for Barrow in 1913 and St Helens in 1914. Jimmy Peters made his international debut in 1906, seventy-two years before Viv Anderson became England's first black soccer player. He was laid to rest in Plymouth in 1954. About the Author - Nadine Fletcher is an HLF Skills for the Future West London trainee in heritage learning, interpretation and participation. She completed a six-month traineeship at the World Rugby Museum before submitting this article.