The museum recently received an enquiry from a Mr Strang who had in his possession an 1888 England cap that had belonged to his Grandfather. 1888 was an interesting year for English rugby. A dispute between England and Scotland meant that England would not contest any of the fixtures that normally constituted the Home Nations Championship. The dispute would later be resolved with the formation of the International Rugby Football Board. Despite this a team was selected and caps awarded even though two of those named would never actually take to the field for England. However, JHP Strang's name was not amongst them. 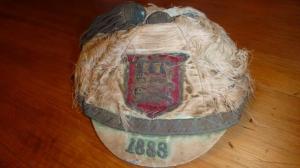 Upon receiving a photo of the cap the mystery was resolved. Although the English football team wear the symbol of the three lions, England Rugby have always worn the rose. The three lions badge on Mr Strang's cap indicates that his Grandfather played for Lancashire. 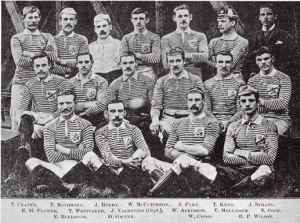 On further research we discovered that JHP Strang came very close to full international honours when selected for England in 1891. Sadly he was unable to travel. Here is the rest of what we discovered: JHP Strang Born 19 May 1867 8 Belmont Park, Lee, Kent - Died 14 May 1956 New Plymouth, New Zealand He was educated at the Leys School in Cambridge and left in 1883. He played for the Old Leysians as a half back during the 1884-85 and 1885-86 seasons before moving on to play for Blackheath as he lived close to the Rectory Field, Blackheath's ground. He played 13 games for Blackheath between 1884 and 1891, but made his reputation as a dynamic forward playing for Liverpool and representing Lancashire in 16 matches. He played for Liverpool and Liverpool & District.

"J Strang was the best forward on the field. It is a pity that this player has such poor support from his fellow forwards, as he is undoubtedly a really first-class player, but has too much to do."

"The first try by Strang was a very soft one … Strang's second try, too, might have been saved, as Nicholl had an easy tackle, but failed to hold his man."

Strang appears not to have played first-class rugby during the 1889-90 season. However, he was a very prominent player throughout the first half of the 1890-91 season. He was chosen to play for North v South at Blackheath on 20 December 1890. However, the match was postponed due to heavy snow. The match was re-arranged to be played on 29 December 1890 at Headingley and Strang retained his place. Tragically his younger brother, Alex Strang, died two days before the game was to be held and he was replaced in the side by CTB Wilkinson (Durham City). 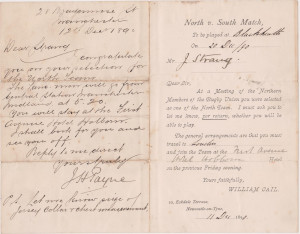 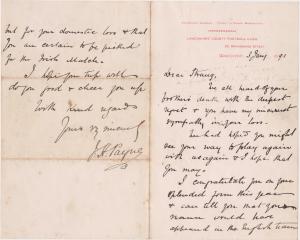 The England team to play Wales was announced the day after the match, but Strang was not included in it. However, he was definitely chosen to play for England in their next international against Ireland on 7 February 1891 in Dublin but, possibly still in mourning, was one of the 3 chosen players who were unable to travel to Dublin. He was never given another chance to play for England. Although he was in the photo of the Lancashire team which played the Rest of England on 18 April 1891, he was one of two players who did not play in the match. J Strang (as listed) is dressed in a suit and it is known that he and EH Flower did not play in the actual match. There is no mention of Strang in the match reports for the 1891-92 and 1892-93 seasons in Pastime magazine. He married and left London with his wife on 25 January 1894 to emigrate to New Zealand where they lived in Palmerston North. There is no record of him having played provincial rugby for Manawatu, although a "Mr J Strang" was a Vice-President of Foxton Football Club in 1898.